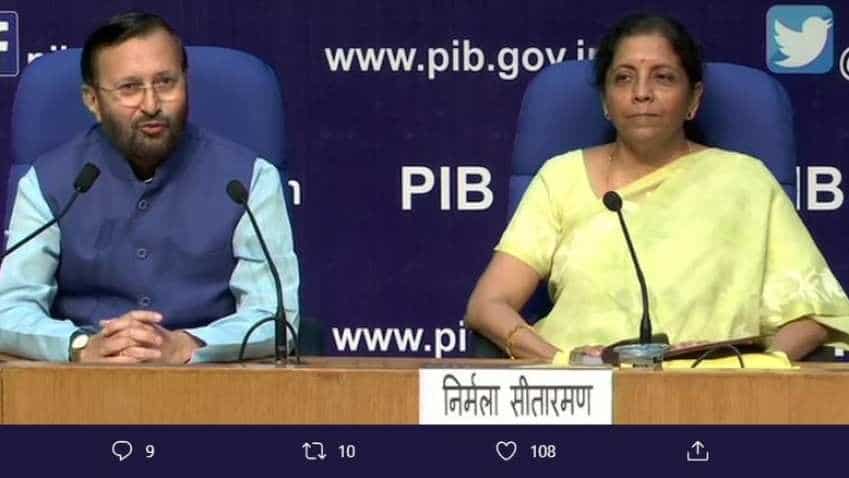 Cabinet has also suggested to pass an ordinance to address this issue, and "we hope to take this up in the next Parliament meeting. Image source: Twitter/ANI
Written By: ZeeBiz WebTeam
Edited By: Arun Kumar Chaubey
RELATED NEWS

7th Pay commission latest news: For over 11 lakh Indian railway employees, the central government today announced a bonus, equivalent to the wage of 78 days. This year also, 11,52,000 employees will get 78 days wage as bonus which is linked with the productivity.

Talking about the Cabinet decisions at National Media Centre, Prakash Javadekar said, "For 11 lakh railway employees, this govt has consistently for last 6 years, being giving record bonus, equivalent to the wage of 78 days. This year also, 11,52,000 employees will get 78 days wage as bonus. This is the reward for productivity." He added that the bonus amount would incur an additional expenditure of Rs 2024 crore.

In another announcement, Finance Minister Nirmala Sitharaman said "The Union Cabinet has given approval to ban e-cigarettes. It means the production, manufacturing, import/export, transport, sale, distribution, storage and advertising related to e-cigarettes are banned."

The Finance Minister said, "Reports say that there are some who are probably getting into the habit of e-cigarettes as it seems cool. It is believed that there are more than 400 brands, none of which is manufactured yet in India. And they come in over 150 flavours."

She said the Cabinet has also suggested to pass an ordinance to address this issue, and "we hope to take this up in the next Parliament meeting," adding "In the United States, there are 7 deaths that are directly linked with e-cigarettes."

The Information and Broadcasting Minister added that it was a timely step and the proposal had come to the cabinet after due deliberation, adding "This is a welcome step. Prevention is always better."

She said all offences such as import, export and distribution, except storing e-cigarettes and vaping products are cognizable.