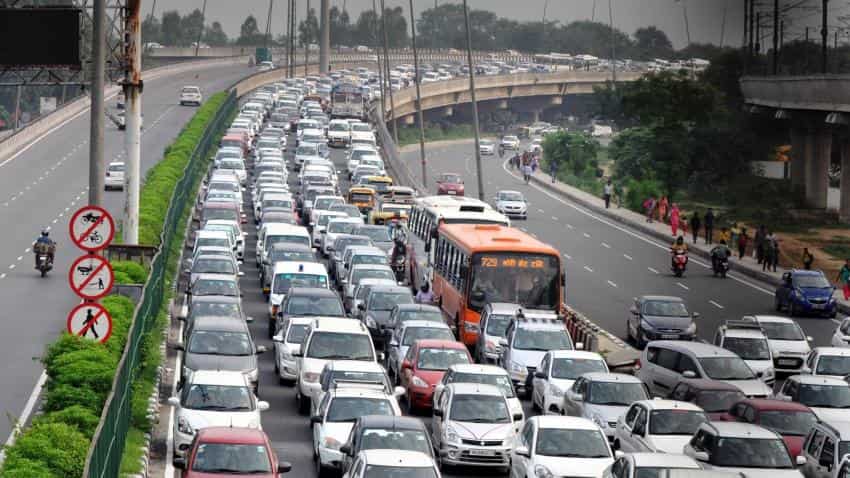 The bill provides for facilitating delivery of services to the citizens and transporters. Photo: IANS
Written By: PTI
RELATED NEWS

The Cabinet on Friday approved the Motor Vehicle (Amendment) Bill 2016 that provides for linking of driving licence and vehicle registration with Adhaar-based platform and proposes heavy penalties for traffic violations.

"We have proposed an amendment in the Motor Vehicle Act where people need to have Aadhaar number to apply for driving licence and need not to visit transport offices to get a learning driving licence as it all will be online," Road Transport and Highways Minister Nitin Gadkari told reporters after the Cabinet meeting.

"The Bill proposes Aadhaar-based verification for grant of online services including learner's licence. This would ensure the integrity of the online services and also stop creation of duplicate licences," he said.

The move comes in wake of de-duplication of licences and registration of stolen vehicles. The government has decided to make an all-India register for driving licences and vehicles which would be available across the country.

Gadkari said the Cabinet has approved various changes in the Motor Vehicle (Amendment) Bill 2016. These include 16 amendments and rejection of three suggestions made by the Parliament Standing Committee.

The three major suggestions rejected by the government include registration of vehicles by only RTO and inspection of vehicles by RTO. Once the bill is approved vehicle dealers will be authorised to issue vehicle numbers and register them through an all-India electronic register.

The bill introduced in Parliament last year had proposed 89 clauses for amendment out of which only 57 were accepted by the Parliament Standing Committee on Transport, headed by Mukul Roy.

With the Cabinet approval, now decks are cleared for the government to bring much-needed reforms in the transport and road sector, he said, adding the government may table the bill in Parliament next week.

The important aspects of the bill are 100 per cent e-governance to be brought in transport sector, the minister said, adding identity verification using Aadhaar will be used, bad roads contractor to be liable for fine, drivers will included in third part Insurance and Claims would be time bond.

The bill was introduced in the Lok Sabha on August 9, 2016 and was referred to Departmental Standing Committee on Transport, Tourism and Culture, headed by Mukul Roy.

The Motor Vehicle Act 1988 is a 30-year-old instrument which had not kept pace with the change of dynamics of road transport & information technology.

The bill specifically targets traffic offenders with stringent penal provisions. The bill has identified priority areas for improving road safety. Stricter penalties are proposed for high risk offences such as drunken driving, dangerous driving, overloading, non-adherence to safety norms by drivers (such as use of seat belt, helmets).

The bill provides for facilitating delivery of services to the citizens and transporters. The bill aims to provide for maximum governance with minimum government. This would help in reducing the harassment faced by the stakeholders in the RTO offices. A national data base of vehicles and driving licences would help in safety and security and avoid malpractices.

The minister said it is a largely pro-people initiative and will reform the Motor Vehicle insurance sector.

"It provides specific timelines for processing of insurance claims. A ten fold increase has been made in the amount of compensation awarded under a simplified process of claims disbursal wherein the family of an accident victim would get compensation of Rs 5 lakh as settlement within four months of the accident. Presently it takes at least four to five years for an award," he said.

In the accidental death cases arising from hit and run accidents, the bill proposes an increase of compensation to Rs 2 lakh, an eight fold increase over current.