Speaking at the start of the Budget 2021 Session, Prime Minister Narendra Modi said that this was the beginning of first session of the decade and it was a very important decade for the future of the country. It is a golden opportunity for India to implement the dreams and aspirations of all those who have participated in the freedom movement. This decade should be made full use of, the PM urged 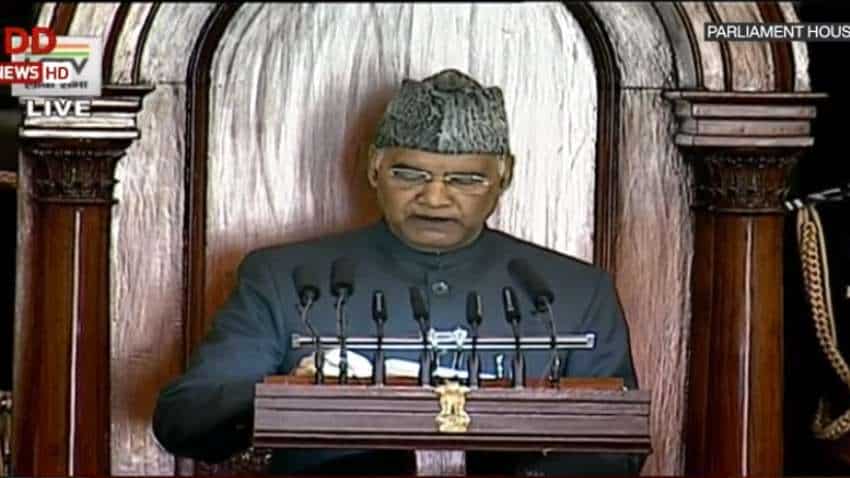 Budget Session 2021 - President Ramnath Kovind today in his customary address ahead of the Budget 2021 Session said that the Government that the rights and facilities of the farmers that were available before the formation of the three  FarmLaws have not been cut short, Through the new agricultural reforms the Government has provided new facilities and rights to farmers, President  said Kovind.

Earlier, speaking at the start of the Budget 2021 Session, Prime Minister Narendra Modi said that this was the beginning of first session of the decade and it was a very important decade for the future of the country. It is a golden opportunity for India to implement the dreams and aspirations of all those who have participated in the freedom movement. This decade should be made full use of, the PM urged.

The coming decade is vital for India’s progress. We have to remember the vision and dreams of the greats who fought for our nation’s freedom. Let there be detailed debate and discussions on the Floor of Parliament: PM

Budget 2021: Everything you need to know - See Live UPDATES Here!

11:57 am - Besides fulfilling the domestic requirements, India has provided necessary medicines to more than 150 countries. India is also committed to ensuring the availability of vaccines on a global scale: In conclusion, President Ram Nath Kovind, said in Parliament

11:53 am - 20 jawans made the supreme sacrifice in Galwan valley in June 2020. Every citizen is grateful to these martyrs. My Govt is committed to the protection of the interests of the nation. Extra Forces have been deployed at LAC for protection of India's sovereignty: President Kovind

11:52 am - The rehabilitation of Bru refugees is being carried out peacefully. The historic Bodo peace agreement was also signed and successfully implemented. Bodoland Territorial Council election took place successfully after the agreement: President Ram Nath Kovind

11:51 am - Extermism in the northeast is heading towards its end, the incidents of violence are declining. The youth that had gone astray is returning to the mainstream of development and nation-building: President Ram Nath Kovind, in Parliament

11:49 am - The nation is recovering from the damage that the economy suffered while saving the life of every Indian during the Corona period. Even in this difficult time, India has emerged as an attractive destination for global investors: President Ram Nath Kovind, in Parliament

11:40 am - Last govts had made efforts for construction of a new Parliament building. It's a delightful coincidence that the nation started construction while moving towards 75th year of independence. The building will provide more facilities to MPs in carrying out their duties: President

11:30 am -  My Govt would like to clarify that the rights and facilities that were available before the formation of the three #FarmLaws have not been cut short, in fact with these new agricultural reforms the Govt has provided new facilities & rights to farmers: President Ram Nath Kovind-

11:23 am - Small and marginal farmers are also a priority for my Govt. To support such farmers in their small expenses, around Rs 1,13,000 crores have been transferred directly to their accounts, under PM-Kisan Samman Nidhi: President Ram Nath Kovind, in Parliament

11:19 am - The national flag and a holy day like Republic Day were insulted in the past few days. The Constitution that provides us Freedom of Expression, is the same Constitution that teaches us that law & rules have to be followed seriously: President Ram Nath Kovind, in Parliament

11:15 am - The facilities of Ayushman Bharat Yojana can be availed in any of the 24,000 hospitals across the nation. The poor are getting medicines at very low costs at 7000 centres across the country, under Pradhan Mantri Bhartiya Janaushadhi Pariyojana: President Kovind, in Parliament

11:14 am -It is a matter of pride that India is running the biggest vaccination program in the world. Both vaccines of this program are made in India. In this crisis India shouldered its responsibility towards mankind & provided lakhs of doses of vaccines to several nations: President

11:12 am - In the light of receiving a large number of complaints of irregularities in Food Corporation of India (FCI) godowns, Central Bureau of Investigation (CBI) is conducting joint surprise checks at about 20 locations in Punjab and Haryana, as part of preventive vigilance: CBI

11:11 am I am satisfied that the timely decision taken by my Government saved the lives of lakhs of citizens. Today the number of new COVID cases is going down rapidly. The number of recoveries is very high: President Ram Nath Kovind, in Parliament

11:10 am - I am satisfied that the timely decision taken by my Government saved the lives of lakhs of citizens. Today the number of new COVID cases is going down rapidly. The number of recoveries is very high: President Ram Nath Kovind, in Parliament

11:04 am - In this fight against the pandemic, we lost many citizens. Former President Pranab Mukherjee passed away in this Corona period. Six MPs left us untimely due to COVID. I pay my tribute to all of them: President Ram Nath Kovind, in Parliament

11:01 am - President Kovind: The country has lost many people untimely to Cronavirus Pandemic

10:59 National Anthem takes place in the Central Hall of the Parliamnent

Economic Survey 2020-21: Finance Minister (FM) Nirmala Sitharaman will present the Union Budget 2021 on 1 February 2021. This is one of the most anticipated budgets as has been indicated by the FM herself not seen in 100 years. This is expected to set the tone of how India recovers from the COVID-19 pandemic.

The Economic Survey has three parts -- Volume I, Volume II and Statistical Appendix.The Survey has two parts--one, one consists of the economic challenges that the country is facing and the second is the review of the year gone by.

The Economic Survey 2020-21 comprises data on the performance of the economy in the past year, future challenges and the way forward. It is like a report card of India that provides detailed statistical data covering both microeconomics and macroeconomics.

CEA to address a press conference on today at 2:30 PM in New Delhi after the presentation of Economic Survey 2020-21 by Finance Minister in Parliament.

This year, the FM will table it in Parliament on 29 January 2021 which is a Friday — two days before she presents the Union Budget for 2021-22 on 1 February. The Economic Survey is authored by Chief Economic Adviser (CEA) Krishnamurthy Subramanian and his team. The survey is prepared by the country's Chief Economic Advisor and tabled in both houses of Parliament.

The Economic Survey is flagship annual document that reviews the development of the country's economy in the past year and provides an in-depth preview of the budget. It is being said that this year, the Economic Survey 2020-21 holds special importance as it will be released in the backdrop of the coronavirus pandemic and an economic slowdown.

This year's Budget and Economic Survey is also unprecedented in a manner that it will be completely paperless. This is a first in Indian history of Budget Speeches. The Economic Survey is made public after a stamp of approval by the Finance Minister. After presentation of the Survey, CEA Krishnamurthy Subramanian and his team will hold a press conference and discuss the document, as is customary.

Meanwhile, 19 opposition parties have decided to Boycott the President's address.

Every year, the Economic Survey is presented on January 31 but this year it will be on January 29. The Union Budget will be presented by Finance Minister Nirmala Sitharaman on February 1. The Budget session will be held in two parts -- January 29 to February 15 and March 8 to April 8 and will have a total of 33 sittings. With a view to have a paperless Budget, all the documents and the Economic Survey would be made available online soon after the authenticated copies are laid on the table of Lok Sabha.