Budget 2019 Highlights: Finance Minister Piyush Goyal has presented the Modi government's first interim Budget today. While several populist measures have been announced, sops for farmers and doubling of income tax exemptions limit for salaried class were the key highlights of the Budget. 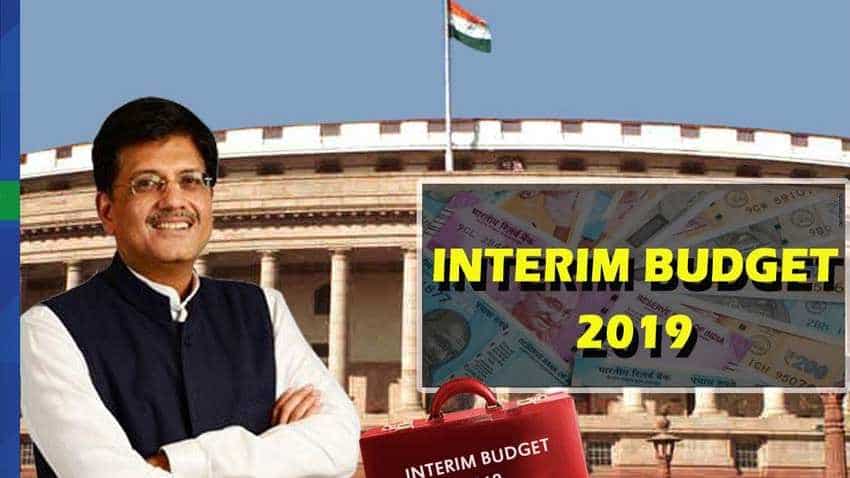 Budget 2019 Highlights: Piyush Goyal has made many key announcements that will benefit common man.

Budget 2019 Highlights: Finance Minister Piyush Goyal presented Narendra Modi government's first interim Budget today. Goyal was given additional charge of the finance ministry as Arun Jaitley is undergoing treatment. Piyush Goyal has made several key announcements in Budget 2019. The government has tried to appease and reach a large section of voters in the Budget ahead of Lok Sabha elections. Check out the big changes that wil benefit the taxpayers:

The finance minister finally came up with much awaited announcements, which brought a big cheer to a common man. Whether this was an election move to please people or a commitment for the general benefit of people is open for all to argue. Though there were no major expectations from this budget as it was an interim Budget , yet there was a pleasant surprise for the middle class income tax payers in the form of increase in rebate up to 500000 and increase in standard deduction for salaries people upto 50000. There was also some disappointments with regard to the expectations of increase in deduction limit under section 80 C.

Below are the major changes as regards to direct taxes.

1. With investments us 80C, the exemption limit becomes 6.5 lacs.

6. Roll over if Capitalgains increased under section 54 to 2 Residential houses Upto  Capital Gains Of 2 Cr. To be availed once in a life time.

Highlights of the budget in a nut-shell by Deloitte:

With an eye on the ensuing elections, the interim budget was largely focused on providing relief to farmers, middle and lower middle class tax payers including salaried persons, and on enhancing infrastructure and social spend. With no changes in the Indirect tax structure, the key income tax proposals are as under:

* No changes proposed in the tax rates for corporates

In a nut-shell, it was a balanced budget, partially populist but phenomenally pragmatic as it did not significantly disturb the FRBM mandated fiscal deficit targets. The interim budget did engender a good feel factor for the urban small taxpayer and the distressed small farmer, which were impacted by the demonetisation and the teething troubles in the wake of GST.  The increase of income in the hands of this large segment of the populace is aimed at putting extra disposable income in their hands which should result in increased consumption. Increased levels of consumption would provide a fillip to the  domestic manufacturing sector. Growth in production should substantially augment GST revenue, in the near future. Also, the 2030 vision shared by the Government shows their firm intent to transform the country into a modern, clean and prosperous India.

1. Finance Minister Piyush Goyal thanks PM Narendra Modi and former FM Arun Jaitley as he starts presenting interim budget 2019. Says PM Modi has envisioned an India free of poverty. "India is solidly back on track and marching towards growth and prosperity," said Goyal. FM Goyal says NDA government has brought down the inflation to an all time low in last few decasdes. Inflation in December 2018 was just 2.1%, he said.

2. Fiscal deficit for FY18-19 has been at 3.4 per cent, says Piyush Goyal. Current account deficit is expected to be 2.5% this year. He said that the NDA government has been free of corruption.

3. Around two lakh seats will be provided in the education institutions under 10% EWS Quota: Piyush Goyal

4. Almost 3 lakh crore has already been recovered in favour of banks and creditors, big defaulters have also not been spared by our government: FM. The 4R approach and a number of measures have been implemented to ensure clean banking : FM Piyush Goyal 1.Recognition 2.Resolution 3.Recapitalization 4.Reforms.

5. We have built 1.53 crore houses under affordable housing scheme in last five year: Goyal. Pace of construction of rural roads has been tripled under our tenure, he said. Construction of rural roads has been tripled; 15.8 lakh out of a total 17.84 lakh habitations have been connected with pucca roads under PMGSY. PMGSY allocated 19,000 crore rupees in 2019-20(BE): FM Piyush Goyal. India is the fastest highway developer in the whole world, 27 kms of highways built each day, projects stuck for decades completed; Sagar Mala will help faster handling of import and export cars: FM Piyush Goyal

8. To provide assured income support for small and marginal farmers, Pradhan Mantri Kisan Samman Nidhi has been approved. The farmers will not get Rs 6,000 per annum in their account in three equal installments of Rs 2,000 each. The scheme will come into effect retrospectively from December 1, 2018. The amount will be credited into the account of farmers directly. It will cost Rs 75,000 crore to the government. This initiative will benefit 12 crore small and marginal farmers. For the welfare of farmers and for doubling their income, historic decision was taken to increase MSP by 1.5 times the production cost for all 22 crops, said Goyal.

11. High growth and formalization of economy has resulted in increased EPFO membership by 2 crore in last two years: Goyal. Gratuity limit has been increased to Rs 20 lakh. || Due to increase in the threshold limit of Esi scheme,  industrial workers drawing a salary of upto Rs 21000 will now be eligible for health care at clinics and hospitals run by ESIC: Sanjay Agarwal of TASS Advisors.

14. Committee under NITI Aayog to be set up to identify and denotify nomadic and semi-nomadic communities; Welfare Development Board to be set up under Ministry of SJ&E for welfare of these hard-to-reach communities and for tailored strategic interventions: FM Piyush Goyal

16. Within a short time of launch of Ayushman Bharat, the healthcare scheme, nearly 10 lakh people have benefited and have saved around 3000 crore rupees of their hard earned income: FM Piyush Goyal

17. Our soldiers are our pride and honour; OROP, pending for last 40 years, has been implemented by us: FM Piyush Goyal. Already disbursed 35,000 crore rupees for our soldiers under OROP, substantial hike in military service pay has been announced: FM.

19. Vande Bharat Express will provide speed, service and safety to citizens and will give a boost to Make In India: FM Piyush Goyal. Rs 65,000 crore allocated to railways.

20. Cost of data and voice calls in India is now possibly the lowest in the world; mobile and mobile part manufacturing companies have increased from 2 to 268: Goyal.

21. Single window clearance for filmmaking to be made available to Indian filmmakers, anit-camcording provision to be introduced to Cinematography Act to combat film privacy: FM Piyush Goyal

22. In the last 5 years under all categories of workers, minimum wages increased by 42% which is the highest ever: FM Piyush Goyal

23. 99.54% returns have been accepted without any scrutiny. Direct tax collections from 6.38 lakh crore rupees in 2013-14 to almost 12 lakh crore rupees; tax base up from 3.79 crore to 6.85 crore. Simplification of direct tax system will benefit taxpayers; direct tax reduced and tax interface made simpler and faceless to make life easier; resulting in increase in tax collections and return filings: FM Shri Piyush Goyal. Within almost two years, almost all assessment and verification of IT returns will be done electronically by an anonymized tax system without any intervention by tax officials, he said.

24. Group of Ministers examining how prospective house buyers can benefit under GST: FM Piyush Goyal. GST has been continuously reduced, resulting in relief of 80,000 crore rupees to consumers; most items of daily use for poor and middle class are now in the 0%-5% tax bracket: FM Goyal.

28. FM underlines 10 most important dimensions that will guide the Government in Vision 2030 --

2) To build a Digital India that reaches every citizen, our youth will lead us in this, by creating innumerable startups and jobs

3) Clean and Green India - an India that drives electric vehicles, with renewables becoming major source of energy, bringing down import dependence and increasing energy security for our people

5) Clean Rivers - with safe drinking water to all Indians, sustaining and nourishing life, using micro-irrigation techniques; long coastline can be pivotal for the economy, using strength of blue economy and Sagar Mala

7) India becoming launchpad of the world, placing an Indian astronaut in space by 2022

9) Healthy India, with distress-free and comprehensive wellness system for all is the ninth dimension of our vision for 2030

10) Minimum Government Maximum Governance, with proactive, responsible and friendly bureaucracy, electronic governance is the 10th dimension of our vision for India for 2030

29. FM announces fiscal deficit as a proportion of GDP - 3.4% for the coming year, considering need for income support for farmers

32. Along with completion of fiscal deficit consolidation programme, we will now focus on debt-to-GDP ratio consolidation: FM Piyush Goyal

33. On behalf of all the people of India and our Government, thank all our taxpayers for their valuable contribution to nation-building and for providing a better quality of life to poor and marginalized:FM Piyush Goyal

34. Amendments proposed to ensure streamlined system for levy of stamp duties, to be imposed and collected at one place, seamlessly: FM Piyush Goyal

Individual taxpayers having annual income upto Rs 5 lakhs will get full tax rebate. Individuals with gross income up to 6.5 lakh rupees will not need to pay any tax if they make investments in provident funds and prescribed equities :FM Piyush Goyal#Budget2019#BudgetForNewIndia pic.twitter.com/4LgxrCK9u3

36. Benefit of rollover of capital tax gains to be increased from investment in one residential house to that in two residential houses, for a taxpayer having capital gains up to 2 crore rupees; can be exercised once in a lifetime: FM Piyush Goyal

37. Individual taxpayers having annual income upto Rs 5 lakhs will get full tax rebate. Individuals with gross income up to 6.5 lakh rupees will not need to pay any tax if they make investments in provident funds and prescribed equities :FM Piyush Goyal