Budget 2019: Fearing that many sops will be granted by Modi government and that this may hit India's financial stability, CLSA India warned against it, but then put things in perspective, "The pressure to further expand the farmer welfare programme ahead of the 2019 elections is high for PM Modi." Brokerage Nirmal Bang said, "In our view, with the upcoming polls gaining precedence, fiscal consolidation is likely to take a back seat." 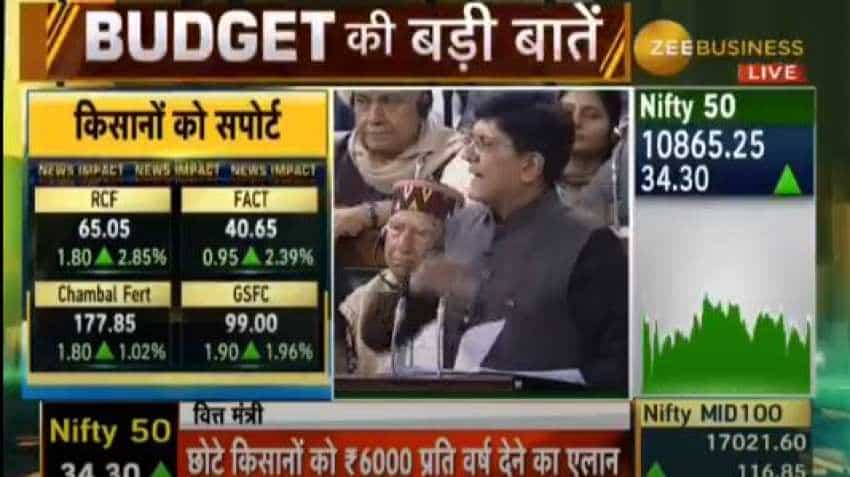 Budget 2019: Cabinet, chaired by PM Narendra Modi approved the interim Budget today morning. With Modi government stressing on economic development, expectations across industries and the common man have soared. However, PM Modi is facing the challenge of depressed farm incomes and jobs creation and most expect FM Piyush Goyal to address these 2 issues on a war footing. Ahead of presentation, spending on rural welfare was expected to be hiked by 16 percent for the fiscal. The interim Budget is being presented by Finance Minister Piyush Goyal in Parliament. President Ram Nath Kovind had signed the financial proposals after FM Goyal paid him a visit earlier today before proceeding to Parliament for the presentation itself. As far as the Bharatiya Janata Party (BJP) is concerned, then it is very gung-ho as is clear from the comment by Gopal Krishna Agarwal, spokesman for economic affairs, who said, "The country`s macroeconomic parameters are very healthy, GDP growth has been very good. Agriculture, employment and the middle class are under focus."

Fearing that many sops will be granted by Modi government and that this may hit India's financial stability, CLSA India warned against it, but then put things in perspective, "The pressure to further expand the farmer welfare programme ahead of the 2019 elections is high for PM Modi." Brokerage Nirmal Bang said, "In our view, with the upcoming polls gaining precedence, fiscal consolidation is likely to take a back seat."

As the Modi government's last financial statement is being presented in the Lok Sabha of Parliament by Finance Minister Piyush Goyal, here are key takeaways from the Budget speech of the FM:

1. Finance Minister Piyush Goyal begins interim budget speech, wishes Union Minister Arun Jaitley speedy recovery and good health. He is recovering in the US after medical treatment and was unable to come back to India in time for the presentation of the Budget today.

2. Fiscal deficit this financial year would be 3.4 percent of gross domestic product (GDP), slightly higher than the targeted 3.3 percent, Goyal said on Friday. "Fiscal deficit has been brought down to 3.4 percent in the revised estimate of 2018/19," Piyush Goyal told the Lok Sabha as he delivered the Hindu nationalist-led government`s last budget for an election that must be held by May. The deficit was widely expected to be higher than targeted due to a combination of revenue shortfalls and increased spending ahead of the election.

4. PM Kisan
For small and marginal farmers would get income support of Rs 6000 in their account directly, in three instalment. This progrmme would be 100% funded by GOI, about 12 crore farmers would be benefitted and this would be implemented from Dec 1, 2018. Goyal said Rs 75,000 crore will be allocated for the scheme for 2019-20 and Rs 20,000 crore has been set apart in the revised estimates for the current year 2018-19.

5. The Finance Minister  said that Rs 1.7 lakh crore has been allocated on food subsidy and Rs 60,000 crore for the Mahatma Gandhi National Rural Employment Guarantee Scheme.

Assured monthly pension of Rs 3000 after 60 years for those worked in unorganised sector. This will benefit about 10 crore people.  Under this plan, those who start it at the age of 29 years will have to 100 per month till 60 years.

If they start it at 18 years, they have to pay merely Rs 55. The government will contribute eual matching share in the pension amount.

7. Goyal has also given grant worth Rs 60,000 crore for fiscal FY20 to of Mahatma Gandhi National Rural Employment Gurantee Act (MNREGA). This scheme aims at giving social security and guarantees 'right to work'.

8. Farmers affected by severe natural calamity will get 2% interest subvention on all rescheduled crop loans and additional 3 per cent on timely repayment.

10. Govt announces setting up of Rashtriya Kamdhenu Aayog to enhance productivity of cows

11. The defence budget for 2019-20 has crossed Rs 3 lakh crore, the highest in any year so far, Goyal said in the Lok Sabha, adding "Our soldiers protect the country on the borders and they are our pride. We have allocated more than Rs 3 lakh crore in this budget for securing our borders, which is the highest so far. If necessary, additional funds would be provided."

Presenting the Interim Budget in Parliament, Goyal said the "Capital support from Budget for railways is proposed at Rs 64,587 crore for railways in 2019-20.

This is estimated to benefit about  3 crore tax payers. Standard deduction has also been raised from Rs 40,000 to Rs 50,000