Reserve Bank of India (RBI) issued a statement stating that it is keeping a close watch on the vote. It said, “Uncertainty about the poll outcome has resulted in some amount of turbulence in global financial markets, including in India. The RBI is maintaining a close vigil on developments, and will take all necessary steps, including liquidity support, to ensure orderly conditions in financial markets’.” 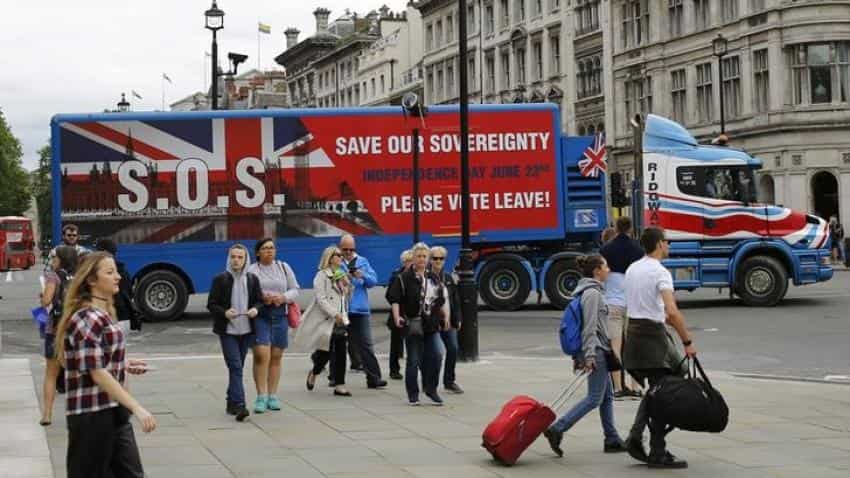 There are more than 800 Indian-owned businesses in the UK, with more than 110,000 employees. Photo : Reuters
RELATED NEWS

The referendum day is here.

Britain goes to poll on Thursday June 23, 2016 to decide if its future lies within the European Union (EU) or without. The world is keeping a close watch.

Indian businesses, too, are invested heavily in the UK with Tata Sons being UK’s largest private sector employer with companies like Jaguar & Land Rover, Tata Steel Europe, Tetley, among others.

Indian technology, telecom, pharmaceutical, steel and financial sector will face the brunt of Brexit, as they were the fasted growing companies in UK. Together the sectors have rose 18% in 2016 to £26 billion from £22 billion in 2015, the Hindu BusinessLine reported.

Reserve Bank of India (RBI) issued a statement stating that it is keeping a close watch on the vote. It said, “Uncertainty about the poll outcome has resulted in some amount of turbulence in global financial markets, including in India. The RBI is maintaining a close vigil on developments, and will take all necessary steps, including liquidity support, to ensure orderly conditions in financial markets’.”

Finance Minister Arun Jaitley is also of the opinion that a Brexit—Britain’s exit from the EU—is going to have a major impact on global economies.

At present, EU is among the largest partner of India embracing 13% of its trade, which is ahead of China (9.6%) and US (8.5%). This numbers are likely to go down, as trade with Britain may increase but there is not there is no certainty that a UK outside of Europe would boost bilateral trade, according to A.K. Capital service reports.

There are more than 800 Indian-owned businesses in the UK, with more than 110,000 employees. Besides, Brexit could also endanger the flow of investment and personnel by diminishing Britain's role in providing access to Europe.

Tata Motors: Its UK-headquartered Jaguar Land Rover subsidiary accounts for a substantial (90% by some estimates) of its profit.

According to a Telegraph report, JLR’s annual profit may slip by 1 billion pounds ($1.47 billion) by the end of 2020 in case of a Brexit.

“Jaguar Land Rover supports continued UK membership of a reformed EU. Access to our customers and suppliers is important to us—any changes could impact our sales, our costs and the skills base,” said a JLR spokesperson as quoted in LiveMint.

Auto-component makers Bharat Forge and Motherson Sumi: These companies account for 30% and 60% of their consolidated revenue from the EU, respectively and are likely face downfall if any changes takes place in the trade structure. Around two-third of India’s component are exported to Europe and the US.

Tata Steel: Risk could be multiple for steel companies such as Tata Steel which has operations in the UK. The company produces around 12% steel in the UK, which is exported to countries in EU.

These exports may face higher import tariffs in case of a Brexit, and demand could be hit, CLSA analysts Mahesh Nandurkar, Abhinav Sinha and Alok Srivastava told LiveMint.

Indian IT Companies: A CLSA report stated that around 25% of India’s $82 billion software exports in FY15 was routed for EU, with the UK accounting for $10 billion.

Noticeably, UK has been the ladder for Indian IT firms to explore in Europe. They have developed a large presence in the market by exporting to Europe from, their headquarters in London, they said.

According to the LiveMint report quoted earlier, following IT companies’ revenues are at stake:

Tata Consultancy Services accounts 26.8% revenue from Europe and 15.8% from UK.

HCL Technologies has around 31 % of its revenue from Europe.

Nearly one-third of Tech Mahindra’s revenues are from EU.

"An initial analysis indicates that the impact on India's technology sector may be mixed; clearly negative in the short term and harder to discern in the longer term with either scenario having some positive and some negative points," IT industry body NASSCOM was quoted on FirstPost.com.

"Consequently, a negative implication of Brexit is that Indian IT companies may need to establish separate headquarters/operations for EU, leading to disinvestment from the UK and diversion of activity from the UK to EU," Nassom added.

As Britain and EU both will have to negotiate the terms of separations which will take another two years period, will provide India’s policy makers and industry enough time to re-align with the changing European landscape, the Assocham paper observed.

In bilateral talks, India raises with US its decision on foreign students' visas