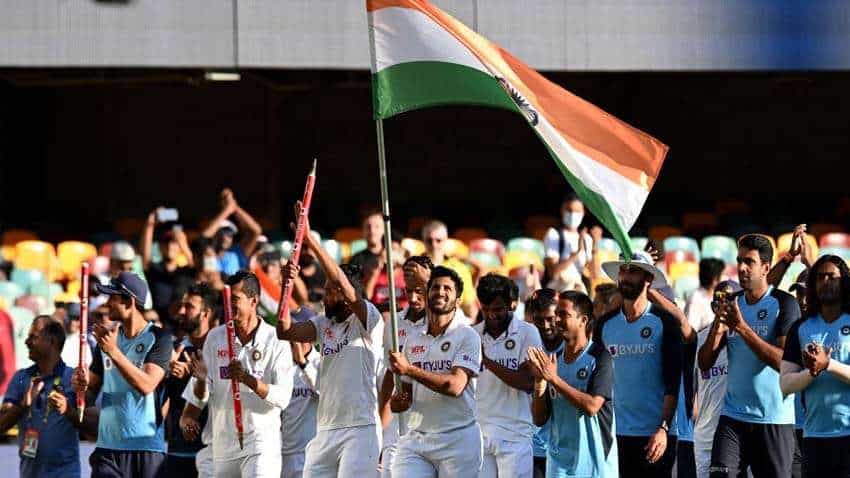 The Ajinkya Rahane-led side beat Australia by three wickets in the fourth and final Test at The Gabba, thereby winning the four-match Border-Gavaskar series 2-1. Photo: BCCI/Twitter
Written By: IANS
RELATED NEWS

Crowd gave me a hero''s feeling every time I bowled: Ashwin

Ind vs Aus Test: From Shah Rukh Khan, Akshay Kumar, Ranveer Singh, Anil Kapoor to Preity Zinta, Bollywood stars expressed their jubilance after the Indian cricket team on Tuesday secured a historic Test series win against Australia. The Ajinkya Rahane-led side beat Australia by three wickets in the fourth and final Test at The Gabba, thereby winning the four-match Border-Gavaskar series 2-1. The Indian team, despite the absence of their regular captain Virat Kohli and other key players, created history by becoming the first team to beat Australia at The Gabba in over 32 years.

Here`s how they celebrated the win on social media:

Shah Rukh Khan: What an absolutely marvellous victory for our team!!! Stayed up all night to watch it unfold ball by ball. Now will sleep peacefully for a bit and savour this historic moment. Love to all our boys and greatly admire their resilience to power us through to this win. Chak De India!

Ranveer Singh: Historic win!!! What an effort!!! So proud!!!

Anil Kapoor: What a historic win for India!! Congrats to @ajinkyarahane88 for captaining such a young side to an amazing win! Great innings by @RealShubmanGill, @cheteshwar1 and @RishabhPant17!

Karan Johar: Incredible. What a historic win! Congratulations #TeamIndia for retaining the #BorderGavaskarTrophy & achieving the stellar feat of winning at the Gabba. Great show of character from the boys, so proud!

Saiyami Kher: Tears rolling down my eyes. The last time I got so emotional was at Wankhede when India lifted the WC. Take a bow Team India. Aye aye captain @ajinkyarahane88

Bobby Deol: Proud of #TeamIndia What an incredible win!

Ranvir Shorey: Congratulations and thanks for this proud moment, #TeamIndia! #INDvsAUS

Preity Zinta: OMG !!! What a WIN #Gabba has been breached & conquered and with it #TeamIndia moves to the No 1 spot in the World Test ranking. What grit, determination & strength of character shown by the boys in Blue #INDvAUS #Champions #JaiHind #Ting

Crowd gave me a hero''s feeling every time I bowled: Ashwin