Almost 18 lakh people were identified who had made deposits disproportionate to their returned incomes. The use of technology helped the tax department significantly. Most of the functioning of the Income-tax Department is now online, returns are filed online, queries are addressed online, assessment orders are handled online and refunds are also made online. Technology is also used for reconciliation purposes in order to detect those who should be filing returns but are non-filers. 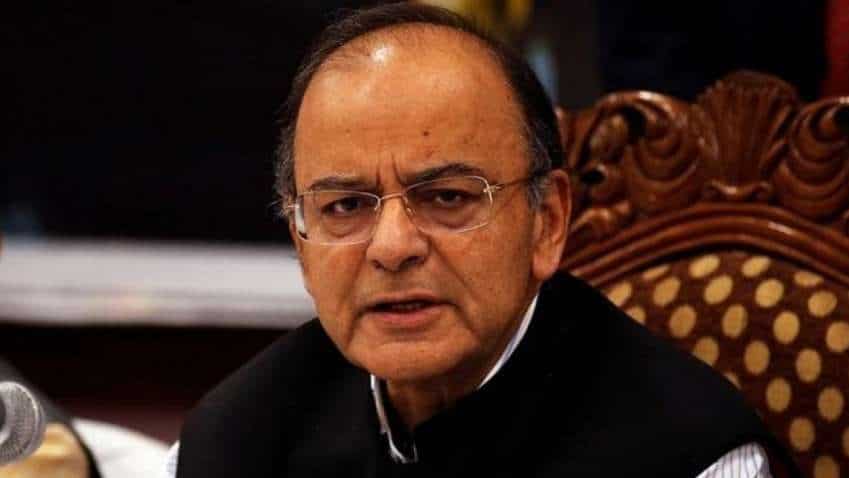 After reports emerged that money parked by Indians in Swiss banks has jumped by over 50 pct to Rs 7,000 crore in 2017 despite the crackdown on black money, Arun Jaitley took to Facebook to counter the allegations of Congress. Image source:
Written By: ZeeBiz WebTeam
RELATED NEWS

After reports emerged that money parked by Indians in Swiss banks has jumped by over 50 per cent to Rs 7,000 crore in 2017 despite the crackdown here on black money stashed abroad, Arun Jaitley took to Facebook to counter the allegations of Congress. Notably, the rising amounts in Switzerland had reversed a three-year downward trend. Congress president Rahul Gandhi had earlier in the day hit out at PM Narendra Modi over the rise in Indian money in Swiss banks. He alleged that the prime minister had said that a 50-per cent jump in deposits by Indians is "white money" and that there is no "black money". Arun jaitley countered these accusations, but before that he also wrote at length about tax collections. Read here full text of Arun Jaitley Facebook blog here:

The Impact of the Government Polices on Direct Tax Collections
ARUN JAITLEY·FRIDAY, 29 JUNE 2018

The first sixty-seven years after Independence from 1947 to 2014 saw a total number of 3.82 crore assesses filing tax returns. Obviously, in comparison to total population of almost 1.3 billion, this figure appears highly inadequate. The total direct tax collection (income tax) in 2013-14 was Rs.6.38 lakh crore. Prime Minister Modi led NDA Government had a multi-pronged strategy to increase the tax base. A campaign involving various steps to flush out black-money, including black-money outside the country, was initiated. The demonetisation led to a lot of people in possession of undeclared cash depositing the same in the banking system. The source of the money was now questioned. Almost 18 lakh people were identified who had made deposits disproportionate to their returned incomes. The use of technology helped the tax department significantly. Most of the functioning of the Income-tax Department is now online, returns are filed online, queries are addressed online, assessment orders are handled online and refunds are also made online. Technology is also used for reconciliation purposes in order to detect those who should be filing returns but are non-filers.

The implementation of the Goods and Services Tax as a single consolidated tax has had a significant impact even on direct taxes.  Those who have disclosed a business turnover for the GST now find it difficult not to disclose their net income for the purposes of income tax.

What would be the combined impact of all these measures on India’s direct taxation base? We had targeted to optimise the base increase without any increase on the tax liability. India’s tax to GDP ratio in four years increased by almost 1.5%. On the contrary, a large number of taxpayers in each of the four Budgets of the present Government has benefitted from relief given. Today a medium-term assessment of the impact of these steps can be made. In four years, the number of assesses has increased by 64.6%. The total number of returns filed was 6.86 crores in FY 2017-18. The number of new assesses who filed returns in FY 2017-18 were 1.06 crore. I hope that the percentage increase when the Government completes its first five years would be significantly higher. The total income tax collection for the year 2017-18 is Rs.10.02 lakh crore, a four year increase of 57%. Last year, despite formidable economic challenges, the income tax collection managed to grow by over 18 percent.

Last year, the impact of the GST on direct tax collection was not visible. Since GST had been imposed in the middle of the year, it will be more apparent this year. The first big news for this year is that the advance tax deposit during the first quarter of this year has seen a gross increase of 44% in the personal income tax category and 17% in the corporate tax category. After repayment of refunds due to some excess tax paid in earlier years, which are usually paid back in the first quarter, the net amount would be somewhat lesser. But if the same trend continues in the next three quarters, one expects a significant increase in the direct tax collection this year. The first indication is that the spending is higher, consumption is higher and corporates are seeing increased sales and a greater prospect of profitability. But increase in the amount of collections in category of personal income tax is also due to more people coming within the tax net. There is also the impact of the GST visible this year. This unprecedented taxation growth is a result of the anti-black money measures, use of technology, demonetisation and the GST. Most of these measures were severely criticized by the Congress Party. This is just the medium-term impact of some of these measures. The long-term impact would be significantly higher. Higher tax collection would enable us to continue with the developmental programmes in the country, not to impose any extra burden on the taxpayers and yet maintain the targeted fiscal deficit.

A news item has appeared today indicating an increase of money by ‘Indians’ in the Swiss banking system. This has led to misinformed reaction in certain circles raising a query whether the Government’s anti-black money steps have yielded results.

Switzerland in financial disclosures was always a reluctant state. Of late it was subjected to a lot of international pressures which favoured disclosures and Switzerland ran the risk of being a ‘non-compliant’ State by the FATF. It has, therefore, entered into several bilateral treaties for making disclosures to requesting States. It has amended its domestic laws involving all disclosures and entered into a treaty even with India and real time flow of information with regard to Indians will be made. The flow of information is starting in January, 2019. Any illegal depositor knows that it is a matter of months before his name becomes public and he will be subjected to the harsh penal provisions of the Black money law in India.

Assuming this information to be correct, what does past experience show? When disclosures have been made with regard to ‘Indians’, including in the Panama Papers, certainly some of them have held illegal accounts. ‘Indian’ money outside the country is of various categories. Past investigation by CBDT have shown that this includes many held by persons of Indian origin who now hold foreign passport, monies belonging to Non-Resident Indians, as also monies belonging to resident Indians who have made legitimate investments abroad, including transfer of money under the liberalised remittance schemes.

It is only monies kept by resident Indian outside these categories which become actionable. The first two categories are within the jurisdiction of those countries where these persons are residents and the third category can easily be checked up in India. If the deposit does not fall in any of these categories, it is per se illegal for which investigations are undertaken, arrests are made and criminal prosecutions are launched. Switzerland has taken significant efforts to get out of the image of being a tax haven and a non-compliant State. It is on the verge of making disclosures in real time and, therefore, is no longer an ideal destination for tax evaders. Those who participate in a public discourse must understand these basic facts before expressing an opinion which may be ill-informed. To assume that all the deposits are per se tax evaded money or that Switzerland in the matter of illegal deposits is what it was decades ago, is to start on a shaky presumption.