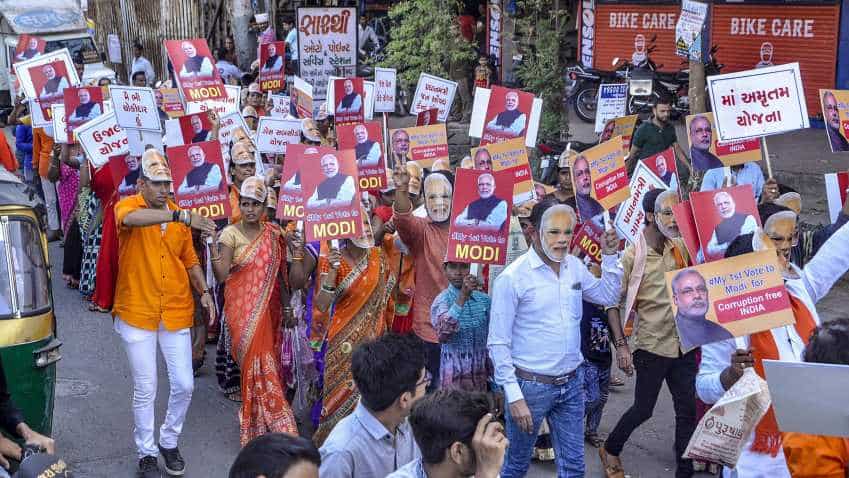 BJP manifesto 2019 Live Updates: The Bharatiya Janata Party (BJP) has released its manifesto (Sankalp Patra) for Lok Sabha elections 2019. The Lok Sabha polls are scheduled to start from April 11. Issues of development and national security are highlights of the BJP manifesto, which was released by top party leaders, including Prime Minister Narendra Modi, party chief Amit Shah and senior leader Rajnath Singh. The BJP describes its manifesto as "Sankalp Patra".

12.51 pm: "We have set 75 well-defined resolutions in our manifesto that we can fulfil in a time-bound manner. We are moving forward with 'one mission, one direction'", PM Modi says.

12.49 pm: PM Modi says the NDA government, if voted to power, will set up another ministry for "Jal Shakti" (water power), set up a special task force to solve water-related issues in a mission mode.

12.28 pm: BJP promises to invest Rs 1 lakh crore in the next five years in infrastructure.

12.23 pm: Arun Jaitley says BJP manifesto has not been prepared with a "Tukde-Tukde" or "IVY League mindset.

12.18 pm: "We will provide short-term new agriculture loans up to Rs 1 lakh at a 0% interest rate for 1-5 years on the condition of prompt repayment of the principal amount," says Singh.

12.15 pm: "We will also give pension facility to small and marginal farmers after 60 years of age," says Singh.

12.12 pm: "We are going forward with 75 resolutions that we can fulfill by the year 2022 when India completes 75 years of independence," says Singh.

12.03 pm: The 'Sankalp Patra' is dedicated to the nation, says Rajnath Singh.

11.52 am: Amit Shah says that in the last five years, the BJP has worked towards providing a decisive government, under the leadership of Narendra Modi.

11.41 am: Shah says that an unprecedented attempt at addressing problems of the poor has been carried out in the last five years under the prime ministership of PM Narendra Modi.