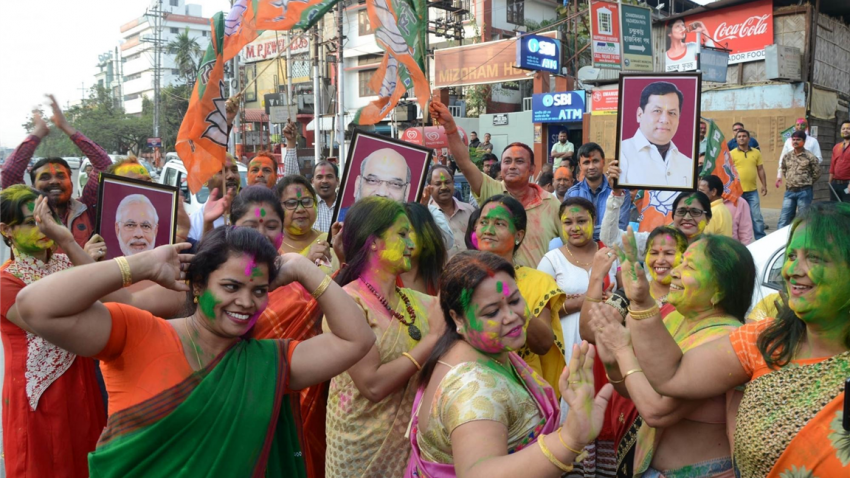 The Bharatiya Janata Party (BJP) has consolidated its position from a marginal player in the region to the major political party with a favourable Assembly poll results in three states of northeast. The saffron party's strong showing surprised many, as its presence in this part of India was insignificant till a few years ago.   The party has clear a majority in Tripura with 40 seats and in Nagaland, NDPP and the BJP combine won 30 seats, respectively, in the 60-member Assembly, while Meghalaya polls threw a hung verdict.

The Congress had earlier staked a claim to form a government in the state after meeting Governor Ganga Prasad. A delegation of three Congress leaders -- Kamal Nath, Ahmed Patel and CP Joshi -- met the governor last night. "We met the Governor and sought his invitation to the single largest party to be called first to form the government as per convention," former Union minister Nath told PTI. The Congress won 21 seats out the 59 that went to polls last month and was 10 seats short of a simple majority.

Earlier, Meghalaya Congress working president Vincent H Pala had expressed confidence that regional parties such as the United Democratic Party and the People's Democratic Front will join the Congress.

However, the BJP had said it was ready to provide all support to form a non-Congress government in the hill state but the initiative has to be taken by the regional outfit National People's Party (NPP), which bagged the second-highest 19 seats. BJP leader Kiren Rijiju met UDP president Donkupar Roy today to discuss the formation of a non-Congress government in Meghalaya, under the leadership of the National People's Party (NPP), which secured the second position with 19 seats.

UDP general secretary Jemino Mawthoh said his party, too, has made it clear during the meeting that it favours a non-Congress government in the state. "We will be discussing government formation with our alliance partners and members of the PDF and the KHNAM soon," he said.  Assam BJP leader Himanta Biswa Sarma also met the UDP president earlier in the day to discuss alliance possibilities, he said.

After heavy losses in Tripura and Nagaland, Nath, Patel and Joshi reached Meghalaya from Delhi in a bid to form a government, party sources said. The Congress has been in power in the state for the last 10 years.

In Nagaland, Neiphiu Rio has the majority and should form the government, Governor P B Acharya said today after a meeting with the NDPP leader. Rio claimed he had the support of 32 MLAs in the 60-member Assembly. Acharya has asked Rio to submit signatures of all the 32 MLAs supporting him by tomorrow.

A senior leader of the Nationalist Democratic Progressive Party (NDPP), an ally of the BJP, said Rio, in his meeting with the Governor, evinced confidence to form the government in Nagaland.

Meanwhile, outgoing Tripura Chief Minister Manik Sarkar submitted his resignation to Governor Tathagata Roy today, a day after the CPI(M)-led Left Front was dethroned by the BJP-IPFT coalition after nearly 25 years in power. The governor advised Sarkar to continue until the new chief minister takes oath.

Coming out of the Raj Bhavan, Sarkar told reporters that he and his ministers would not have been able to run the government for so many years unless the people and the employees extended their cooperation. He expressed gratitude to the people of the state.

Tripura BJP president Biplab Kumar Deb, who is likely to be the party`s Chief Ministerial candidate, on Sunday met Manik Sarkar and took his blessings.

Deb, 48, met the 69-year-old Left leader at the Communist Party of India-Marxist Tripura state headquarters, where the BJP leader went to pay his last respects to Fisheries and Cooperative Department Minister Khagendra Jamatia. "I have not been selected as Chief Ministerial candidate of BJP yet. I met Manik Da and sought his blessings. He is much senior to me and an experienced man," Deb told reporters.

Hailing the BJP's performance in three north-eastern states, Maharashtra Chief Minister Devendra Fadnavis
today said the party will register victory in poll-bound Karnataka as well. He said the BJP secured nearly half of the vote share in Tripura, Nagaland, and Meghalaya, which shows that voters are increasingly supporting the party.

Senior Congress leader M Veerappa Moily said today that secular parties can no longer work in isolation and will have to strike an electoral understanding for survival. Moily also claimed that the Congress would stage a comeback in Madhya Pradesh, Rajasthan and Chhattisgarh, where elections are due later this year, and asserted that the party was going from strength to strength in poll-bound Karnataka.

"When we are facing a communal demon like the BJP, no non-communal people and secular party can work in isolation. At some level, some understanding...Minimum understanding will have to take place to fight against fascist, communal forces," Moily told PTI.
Moily also rejected suggestions that the country was heading towards a "Congress-mukt Bharat", and the Left parties were going to be irrelevant in some years from now.

"That (Congress-mukt Bharat) can never happen. How can it be? Has it happened in Punjab? Is it happening in Rajasthan, where we got two Parliament seats and one Assembly seat; is it happening in Gujarat, where we were about to win but for the gimmicks played by them, misusing the GST power with them?" Moily asked.

On the Left front's poor show in Tripura, the former Union minister said no political party can become irrelevant in India. "In a democracy, zero can become 100 and 100 can become zero. That's democratic aspirations. We have to respond, that's all. Left also should do introspection. They should not lose ground. They need to work," Moily said.

Prime Minister Narendra Modi said today that the people of the northeast have rejected the "politics of hate" by "unanimously" voting the BJP to power. Modi, while addressing a youth convention in Tumakuru about 70 km from here via video-conferencing, said the poll results of Tripura had given him immense joy.

"The brothers and sisters of the Northeast have rejected the politics of hate by unanimously voting the BJP to power," he said.
Hitting out at the previous Left and Congress regimes in the northeast, Modi said the people there earlier were feeling cut off from the Indian mainstream because of policies and decisions that alienated them, but his government has been working relentlessly to wipe off this feeling.

"Our government has resolved to work in such a way that no part of the country and no group feels alienated and we have proved this by working towards it," he said, adding "This wave of integration can also be felt among the people of Karnataka."

The West Bengal BJP today said the party will effect a change in Bengal, much like it did in Tripura, where it scripted history by ending 25 years of CPI(M)-led Left Front rule.

The ruling CPI(M) in Kerala said today that the party's defeat in the assembly election in Tripura should be viewed with utmost seriousness. Veteran party leader and former chief minister V S Achutanandan urged the party leadership to join hands with secular forces to fight the Sangh Parivar.