Big Money in BJP, Congress Lok Sabha manifestos: What you may get if any of these parties win

Lok Sabha elections 2019: Political parties rarely fulfil all the promises they make in the run-up to an election. Sometimes, they even make promises that can't be fulfilled at any cost. 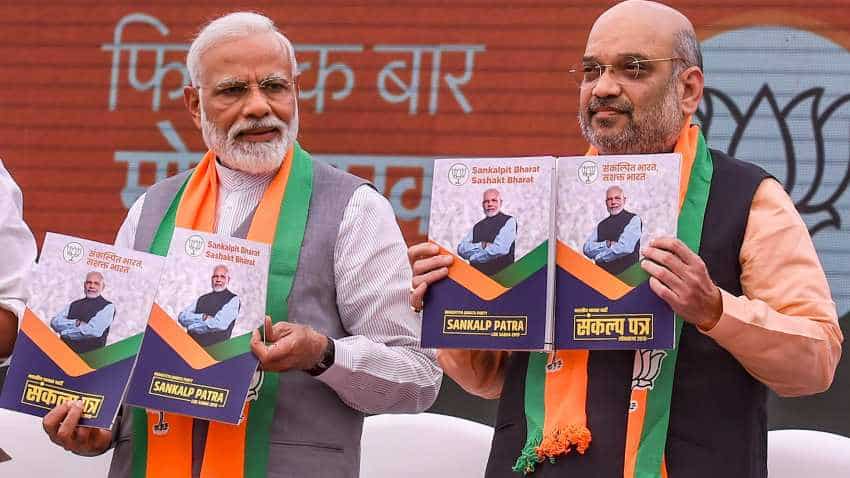 Lok Sabha elections 2019: Political parties rarely fulfil all the promises they make in the run-up to an election. Sometimes, they even make promises that can't be fulfilled at any cost. Nevertheless, making promises is in the spirit of elections - and democracy - as they help people make their electoral choices. For Lok Sabha elections 2019, the two largest national parties of India - BJP and Congress - have also made big promises in their respective manifestos. A glaring similarity in the two promise documents is the money on offer to electorates in the garb of different schemes. Here is a look at the big money plans the two parties have promised this year:
Bharatiya Janata Party (BJP) Manifesto for 2019 Lok Sabha Elections

The BJP released its election manifesto on Monday in the presence of top party leaders including Prime Minister Narendra Modi and party chief Amit Shah.

Cash to farmers: BJP promised to extend the benefits of Kisan Samman Nidhi Yojana to all farmers in the country. Under the scheme, which was recently launched by PM Modi, small and marginal farmers can get Rs 6000 direct cash transfer to their bank accounts every year in three instalments. The money is provided to give financial support to these farmers. The BJP has now promised to extend this scheme to all farmers of the country. "We have launched Pradhan Mantri Kisan Samman Nidhi Yojana to ensure financial support to farmers owning land up to 2 hectares. We will further expand the coverage of the scheme to all the farmers in the country," said the BJP manifesto.

Zero-interest loan: The BJP has also promised to provide a zero-interest short-term loan of 1-2 five years up to Rs 1 lakh on Kisan credit cards. The BJP manifesto said the party will provide, "Short-term new agriculture loans up to Rs 1 lakh at a 0% interest rate for 1-5 years on the condition of prompt repayment of the principal amount."

Pension schemes: PM Modi's party has also promised to start a pension scheme for all small and marginal farmers, as well as shopkeepers, to provide "social security to them on reaching 60 years of age". For small traders, BJP manifesto said, "We will expand the Pradhan Mantri Shram Yogi Maandhan scheme to cover all small shopkeepers."

More promises for small traders: BJP manifest, or Sankalp Patra 2019, said, "To protect the interests of small traders, we will provide accident insurance of 10 lakh rupees to all the traders registered under GST."

Also, on the lines of Kisan credit card, the BJP-led government will create a scheme to give the merchant credit card to registered merchants.

Income tax: The Sankalp Patra said, "We will continue with our policy in a similar manner – lowering of tax rate thereby rewarding honest taxpayers and improving compliance"
For the middle class, it said, "After providing major tax relief in the recent budget, we are committed to further revise the tax slabs and the tax benefits to ensure more cash and greater purchasing power in the hands of our middle-income families."

GST relief: "Goods and Service Tax (GST) has resulted in an overall lowering of tax rates and increased revenue collection, particularly for States. When compared to the base year of 2015-16, GST revenue for all states has increased by 50% in three years. We will continue with the simplification of the GST process by engaging in dialogue with all stakeholders," said BJP manifesto.
Collateral-free loans to entrepreneurs: BJP manifesto has promised to provide collateral-free credit up to Rs 50 lakh for entrepreneurs. "We will guarantee 50% of the loan amount for female entrepreneurs and 25% of the loan amount for male entrepreneurs," it said.

The Congress party released its manifesto days before the BJP. It has made first of its kind offer of providing Rs 72,000/year to 20% families of the country.

- To provide the cash benefit to 5 crore families who constitute the poorest 20 per cent of all families.
- To provide each family guaranteed cash transfer of Rs. 72,000/year. The money will be transferred to the account of a woman of the family, who has a bank account, or who will be urged to open a bank account.

Nyay plan: The Congress manifesto said the scheme will have a Design Phase (3 months), followed by Pilot and Testing Phases (6-9 months) before the rollout in three phases. The estimated cost of the scheme will be <1 per cent of GDP in Year 1 and <2 per cent of GDP in Year 2 and thereafter.   "As the nominal GDP grows and families move out of poverty, the cost will decline as a proportion of GDP," Congress manifesto said.

Jobs: The party said, "All of the 4 lakh vacancies as on 1st April 2019 in the Central Government, Central Public Sector Enterprises, Judiciary and Parliament will be filled before the end of March 2020."

"As a condition for devolution of funds to the healthcare and education sectors and to Panchayats and Municipalities, Congress will request State Governments to fill all vacancies, estimated at 20 lakh, in the 2 sectors and the local bodies." The party has also promised to create approximately 10 lakh new Seva Mitra positions in every gram panchayat and urban local body.