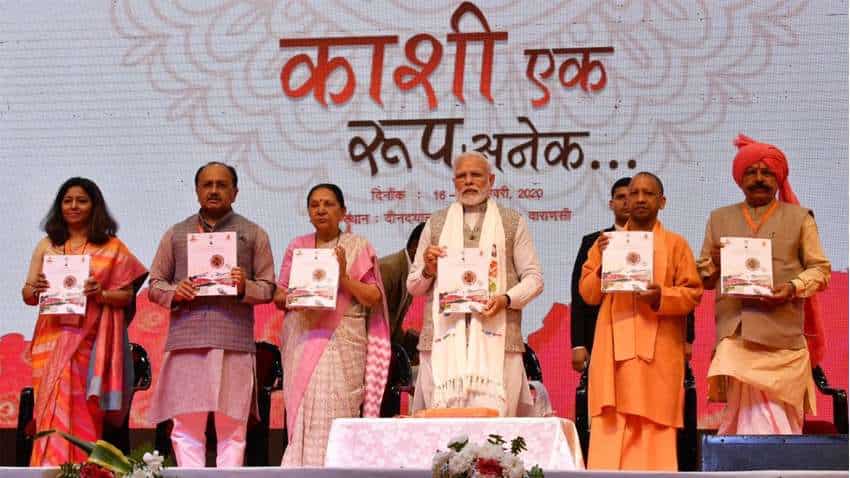 Addressing a function on Sunday at Varanasi, he said facilitating and strengthening traditional handicrafts workers, artisans and MSME will help in achieving the goal. Photo from Twitter of PM Modi.
Written By: Prashant Singh
Edited By: Harish Dugh
RELATED NEWS

At various occasions and platforms, PM Narendra Modi keeps laying emphasis on the ambitious 5 trillion dollar economy goal of his government. Now, in a latest statement, Prime Minister Narendra Modi has said that government will keep taking decisions to achieve the goal of 5 trillion dollar economy. Addressing a function on Sunday at Varanasi, he said facilitating and strengthening traditional handicrafts workers, artisans and MSME will help in achieving the goal.

During the function he visited an exhibition on  various products from Kashi and other districts in UP produced by the  weavers and handicraftsmen. "He not only inspected the stall of Handloom, Pink Meenakari, Wooden Toys, Chandauli Black Rice, Kannauj's Perfume, Moradabad's Metal Crafts, Agra Leather Shoes, Lucknow's Chikankari, and Azamgarh Black Pottery under the One District One Product but also interacted with artisans and craftsman. He also distributed kits and financial assistance to artisans and craftsman from different crafts," an official statement said.

The programme ‘Kashi Ek Roop Anek’ brilliantly showcased the success of the Uttar Pradesh Government’s One District One Product initiative. This effort will go a long way in furthering prosperity in the lives of many, particularly those associated with the MSME sector. pic.twitter.com/aKp9kndTsM

Lauding CM Yogi Adityanath-led UP government, PM Modi appreciated the efforts for taking several initiatives in creating more opportunities for Indian products in the international market and for providing essentials  such as machines, credit, loans to the weavers and handicraftsmen under several schemes. Prime Minister mentioned that due to UP Government’s programmes like One District One Product programme, exports from UP have been steadily increasing in the last 2 years. PM said the country will benefit from the products of UP, reaching abroad and online market of the world.

PM Modi said in India each and every district can be identified with some unique art, product such as different varieties of silk, spices etc. This, he said is the biggest inspiration behind ideas like Make in India and One District One Product.

He noted that in the last 2 years more than 3500 artisans weavers from 30 districts were supported by UP Institute of Design (UPID). Toolkits were also given to over 1000 workers. He commended the efforts of UPID in extending support to weavers, artisans, handicraftsmen etc.