It's a big bonus for the magnificent Indian cricket team for their amazing performance and historic win against Australia. 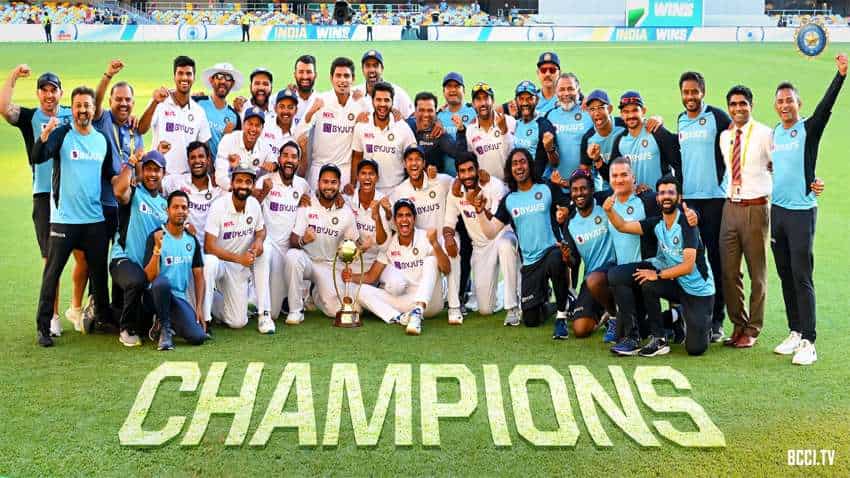 It's a big bonus for the magnificent Indian cricket team for their amazing performance and historic win against Australia. The BCCI on Tuesday announced a Rs 5 crore bonus for the Indian cricket team after the Ajinkya Rahane-led side won the fourth and final Test against Australia to clinch the series 2-1 and retain the Border-Gavaskar trophy. India chased down 328 in the final Test to end Australia's 32-year unbeaten run at the Gabba, Brisbane.

BCCI President Sourav Ganguly and Secretary Jay Shah tweeted within minutes of each other to make the announcement. The Board later issued a formal statement, applauding the team.

"It was a series that showcased grit, determination and resilience of the highest quality," the BCCI said. "The Board applauds the efforts displayed by the team on and off the field... The BCCI is proud of this magnificent feat and has announced a cash reward of 5 crore INR to the team," it added.

Ganguly said the "value of this win is beyond any number." He added, "We are extremely proud of the series win. Beating Australia in Australia by a young team will remain etched in the history of Indian cricket forever. It cannot get better than this. I am so proud of everyone. Congratulations to Ajinkya Rahane and Ravi Shastri and the rest of the touring party for this remarkable feat".

BCCI Secretary Jay Shah echoed the sentiment in his statement. "Heartiest congratulations to every member of the Indian cricket team. The team overcame the odds, injuries and a tough opposition and showed great character, resolve and courage to win the historic Test series in Australia for the second time in a row. "This success on Australian soil will inspire the next generation of cricketers."

In a social media post, Shah lauded the performances of India's young brigade in the absence of some key players due to injury.

BCCI Treasurer Arun Singh Dhumal said the triumph augurs well for Indian cricket. "Proud of all the players and the support staff of this triumphant Indian side who have clinched a 2-1 Test series win to retain the Border-Gavaskar Trophy in Australia. The toughness this team showed was simply remarkable. The young crop of players showed tremendous maturity," he said.