Bharat Dynamics Limited has increased its profitability this time and it is a result of the efficiency that we have shown. We have several plans but the lockdown, which was implemented in the last week of March, had an impact on us and delayed the delivery of many missiles to the services. 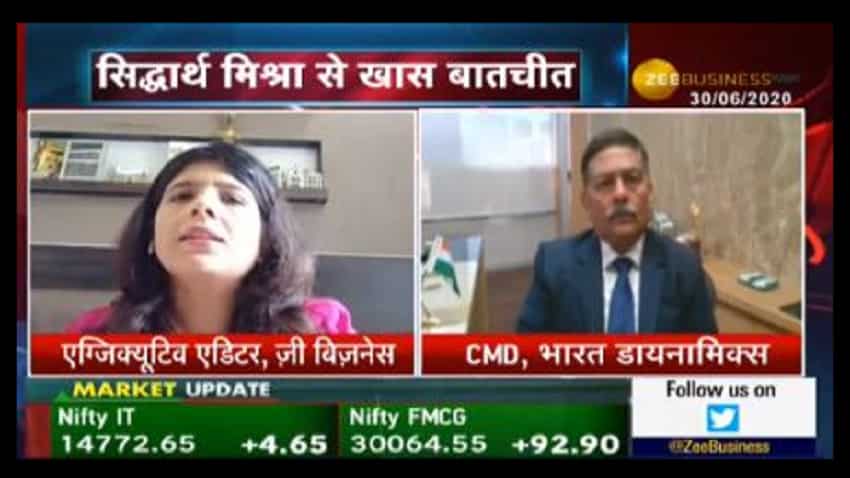 Q: The Company has posted strong numbers in Q4FY20. Take us through the highlights and what is your order book?

A: Bharat Dynamics Limited has increased its profitability this time and it is a result of the efficiency that we have shown. We have several plans but the lockdown, which was implemented in the last week of March, had an impact on us and delayed the delivery of many missiles to the services. However, our turnover improved and our profit after tax (PAT) and profit before tax (PBT) have increased significantly. It also increased because all our products were manufacturing projects and our efficiency increases when we work on manufacturing products. In fact, our workers do more work. At the same time, there was an increase in our efficiency in procurement. Increased efficiency has helped us in increasing our PAT by around 26%.

Currently, we have an order book of Rs 7,400 crore and expect that it will increase this year. We are supposed to get orders worth Rs 12,000 crore this year and many of the orders is being expedited amid ongoing situations.

Bharat Dynamics is India’s only missile manufacturing company that makes the surface to air missiles, anti-tank guided missiles, torpedoes and underwater weapons among others. We have done a lot of work for export purposes. So, the improvement in the numbers was also supported by exports. We have a few orders this year related to exports that should be completed. We are willing to work also for different countries of the world and talks in this relation have started. Thus, we are paying a lot of attention to exports.

Q: You have said that the orders are expediting and it is important when we talk about the Atmanirbhar Bharat (self-reliant India), under which the equipment and raw material, which were imported from China will be developed indigenously even for the export market. How important and big role Bharat Dynamics will play in it?

A: There is a clarion call from the Prime Minister in which he has said that we will remain Atmanirbhar. In terms of design and development, we are associated with DRDO. And, DRDO has created many new weapon systems and we are associated as co-development partners with them. We have engaged in the development of lightweight torpedoes TAL, heavyweight torpedo Varunastra, Akash Weapon System and MR-SAM, the surface to air missile and we are working on it at present and we have received a big order related to it. Besides, the Ministry of Defence has given a clear-cut instruction and all the defence PSUs are working on it. We have planned that in the next 3-4 years, we will manufacture every item, including raw materials and components in India, which is imported to India at present. This will help us in increasing our Atmanirbharta, self-reliance. We will also be able to export it to other countries. This will greatly benefit us and the export of the products will definitely increase our profitability. Right now, we buy a lot of weapon systems from outside but will turn Atmanirbhar in that context in the next 3-4 years.

Q: Many of the PSUs have land and manufacturing facilities among others and the government has said that it will focus on just four PSUs in the strategic sector, which means there will be a consolidation or divestment. So, do you have any plan to leverage your or unlock the value of your facilities like BEML, BHEL who have provided its manufacturing facility to other companies for contract manufacturing and more for being used for the purpose?

A: Our utility factor is above 70% and we are creating many JVs with foreign companies. Last year, we signed two MoUs with Almaz Antey, a big Russian company to create a joint venture under which the parts of the Russian weapon systems will be manufactured in India. It will help in improving the product support to the Indian Armed Forces. Secondly, we have signed an MoU with Javelin Joint Venture to manufacture their missiles in India and then export them.

Apart from this, there is a big company in France named Roxel, who manufacturer’s rocket motives and we want to manufacture these rocket motives in India along with them and they will play an important role in it. In addition to this, we have tied up with Naval Group, a French company, and some more companies. So, we have tied up with many foreign companies and it will help us in improving our productivity.

Q: You have also manufactured Ventilators.

A: Yes. At the very start of the pandemic, we thought of doing something for the country to control this pandemic and we had a discussion with IIT-Kanpur. There is a start-up company Nocca Robotics, which was designing a ventilator. We tied-up with them and then productized the design. Its prototype has been tested and it has been provided to HLL, a PSU, to verify and clear it. HLL has completed the functional trials and clinical trials are pending. However, the ventilator has also been provided to a private hospital, Ruby Hall Hospital, Pune, for conducting its clinical trials, which has been completed.

As far as BDL is concerned, we have completed all the trials and the ventilator is affordable and we have capabilities to manufacture 1,000-1,500 ventilators per month. These ventilators, if required, can also be exported in the case, if the requirement of the Indian government is fulfilled.

Q: Tell us about the kind of CapEx that you have lined-up for FY21? You have said that talks are on with companies to form JVs and you are looking forward to technology partners. So, let us know about the important activities that we can see in next one-two quarters?

A: As far as CapEx is concerned then, we have reduced our CapEx this year because we want to consolidate. However, it will be increased next year. We have planned new facilities and investments related to it will come by next year. Under the plan, we are establishing a new plant at our unit based in Ibrahimpatnam. Its first phase, where a rocket testing facility is located, has been completed and the actual manufacturing of medium-range surface to air missile will start in Phase II, which will happen by the end of this year or the start of next year. So, we have a CapEx this year but it is not quite big but it will increase next year.