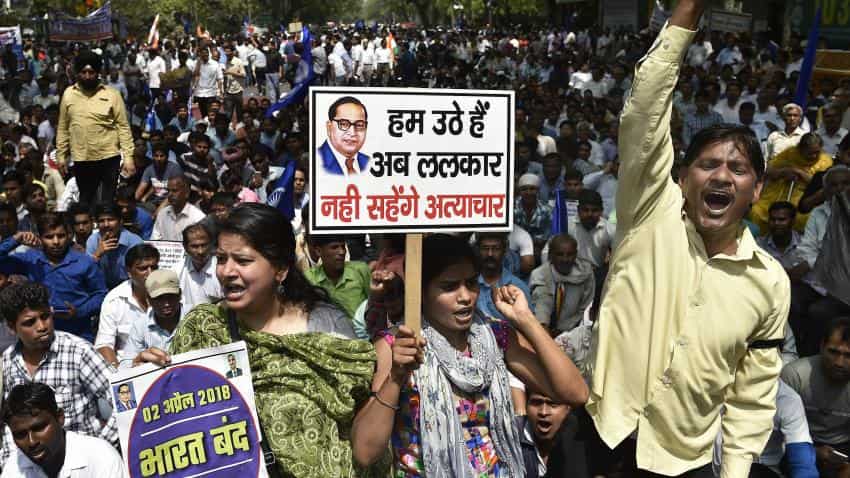 Bharat bandh: Violent protests erupted today during a nationwide bandh called by dalit outfits against the alleged dilution of the SC/ST (Prevention of Atrocities) Act, leaving one person dead and many injured in Madhya Pradesh and disrupting normal life in many states. While some states ordered closureof educational institutions and curtailed communication and transport services, including rail, incidents of arson and vandalism were reported from Madhya Pradesh, Rajasthan, Utar Pradesh, Bihar and Punjab, among other states. Curfew was imposed in Morena, Gwalior and Bhind districts of Madhya Pradesh after a student leader died in firing and several others were injured.

The Army was called in Bhind district, where six people were injured in firing by protesters, to control the situation, Bhind Superintendent of Police Prashant Khare said. The Army and paramilitary forces have been asked to be on standby as a precautionary measure in Punjab. A student leader, identified as Rahul Pathak, died in firing in MP's Morena district, Sub-Divisional Magistrate (SDM) Umesh Shukla said. Union Home Minister Rajnath Singh appealed for peace, while Law Minister Ravi Shankar Prasad said the government was not a party to the Supreme Court decision on the SC/ST Act and "respectfully" did not agree with its reasoning behind the verdict.

Prasad also said the government has filed a very comprehensive review petition in the matter. Union Minister Ramvilas Paswan, a prominent Dalit leader and head of NDA ally LJP, appreciated the government's quick decision to file the petition and accused Congress of having done nothing for Baba Saheb Ambedkar. Uttar Pradesh Chief Minister Yogi Adityanath appealed for peace and urged the people not to vitiate law order, as violence was reported from many districts including Azamgarh where protesters torched two state-run buses, injuring several passengers.
Protests turned violent in Agra, Hapur, Meerut in western UP.

Director General of Police (DGP), OP Singh, said the situation is under control in Agra, Sambhal and Hapur and that anti-riot police have been deployed there. "We have sought more force from the Centre that will be deployed there. We are keeping an eye on the situation, which is under control," he said.
Many trains, such as Saptakranti Express, Utkal Express and the Bhubaneswar Rajdhani as well as the Kanpur Shatabdi, were stopped ahead of Ghaziabad in Meerut and Modinagar, officials said. A group of about 2,000 people disrupted trains at the Hapur station as well, disrupting the movement of many goods trains, they added. Protests were also witnessed at Ambala and Rohtak in Haryana as well as in Chandigarh.

The CBSE has already postponed Class 12 and Class 10 examinations scheduled to be held today in Punjab at the request of the state government in view of the 'Bharat Bandh'. In the national capital region, protesters squatted on tracks at several places, stopping trains, including the Dehradun Express and the Ranchi Rajdhani, while a Northern Railway official said services were also disrupted by a mob in Ghaziabad. The protesters gathered at Mandi House in Delhi and blocked the road outside the metro station there, bringing traffic to a halt and inconveniencing commuters travelling towards ITO and other stretches.

Heavy police force was deployed at Mandi House in view of the protests. Shouting slogans of 'Jai Bhim', the protesters also blocked one of the carriageways of Barakhamba Road affecting traffic on the stretch, police said. The Supreme Court had on March 20 diluted certain provisions of the SC/ST Prevention of Atrocities Act, in a bid to protect 'honest' public servants discharging bona fide duties from being blackmailed with false cases under the Act. The verdict is being widely criticised by the Dalits and the Opposition who claim that the dilution of the Act will lead to more discrimination and crimes against the backward community.

Nearly 30 people- 20 from Ajmer and 10 from Jaipur -- were detained in Rajasthan as protesters blocked rail and road traffic and vandalised public property, including a train, in many parts of the state. Protestors damaged glass windows of Shatabdi Express at Khairthal railway station, Khairthal GRP SHO Ramesh Chandra said. According to Railways spokesperson, movement of seven trains was affected in North-Western railway region. In Patna, MLAs from the opposition parties, as well as some from the ruling side, demanded a resolution be passed by the House urging the Centre to take adequate measures to undo the recent Supreme Court order on arrests under the SC/ST Act.

Protesters stormed the Patna Junction where they forced closure of the ticket booking counters and squatted on railway tracks disrupting movement of a number of trains. Normal life was partially affected in several parts of Odisha as well after activists of 'Adivasi Dalit Sena' staged a rail roko at Khetrajpur station in Sambalpur which caused delay in the running of some trains, officials said. In the state capital of Bhubaneswar, activists of different Dalit organisations put up road blockade near Vani Vihar, Jayadev Vihar and Acharya Vihar areas.