Beyond Budget: Why some people in California are going 'nuts' over GST on Almonds in India

When interim Finance Minister Piyush Goyal presented the interim Budget for 2019-20 in the Lok Sabha on Friday, he also gave a report card of his government’s achievements in last four years. 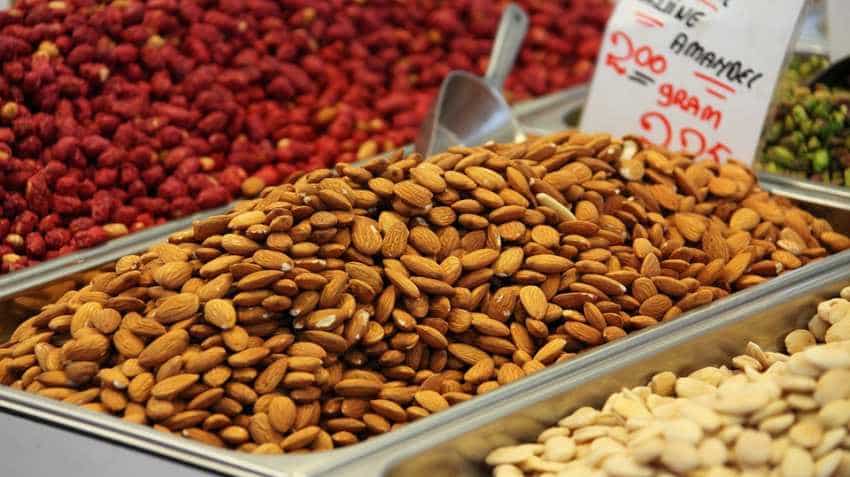 It is the GST on nuts that’s making some people in as far afar as California go nuts (figuratively and not literally of course). Image: Pixabay

When interim Finance Minister Piyush Goyal presented the interim Budget for 2019-20 in the Lok Sabha on Friday, he also gave a report card of his government’s achievements in last four years. And even the Opposition, which has been scathing of these proposals as designed to garner votes, would have had to agree with the minister when he said GST (Goods and Services Tax) is undoubtedly the biggest taxation reform undertaken in India since Independence. That is undeniably so, for since its inception in July 2017, GST created a buzz and changed the way how India transacts and does business.

And while GST may be mentioned in the budget speech as one of the major achievements of the Narendra Modi-led NDA government, the business of GST is actually transacted outside the Parliament. A GST Council has been formed that is headed by the Finance Minister and comprises of representatives drawn from all states of India. The council meets routinely to decide on what taxes to levy on what category — and this levy of different taxes on different products — and that has ramifications on the ultimate price of goods. Now you’d think that all similar products would be taxed similarly but you’d be wrong — not all cars are rated the same, some are for the masses and others fall under the luxury category — so the tax rates on a Maruti and a Mercedes is different. Even within the company, the entire product portfolio may not be taxed similarly.

But it is the GST on nuts that’s making some people in as far afar as California go nuts (figuratively and not literally of course). Initially, all that we know of as dry-fruits, that make up the ubiquitous Diwali, box were put in the 12 percent tax category. But then GST on cashews and raisins was reduced to 5 percent and that’s where it has stayed. But that has put other nuts like almonds or walnuts at a disadvantage. But why would that have a ripple in California? Because that US state not only has the Silicon Valley, it also produces 80 percent of the world’s almonds. Spain is the largest importer of California almonds followed by India and China.

Sudarshan Mazumdar, Regional Director-India for the Almond Board of California says, “India is already the largest export destination in Asia for almonds from California with a shipment of 200 mn lbs in the crop year 2017/18 and a growth of 20% from the previous year. Globally India was the second largest export destination behind Spain by 3 mm lbs. The growth potential is immense as per capita consumption of addressable population is very low at barely 0.33 lbs per person as opposed to countries such as USA, Canada or Germany where it is closer to 2 lbs per person. The rich traditions of almonds and growing awareness of the multi-faceted health benefits from almond consumption are important enablers for growth.”

Mazumdar, the Almond Board of California and several trade bodies have made representations to the GST council and the government to treat all tree-nuts at par. “Tree Nuts have been put in three GST bands. Coconuts and Brazil Nuts have no GST; cashew nuts, walnuts, acrea nuts and groundnuts have a 5% GST. Other nuts like almonds, pistachios, hazelnuts, etc are at 12% GST. The Almond Board welcomes the introduction of GST and the simplification of the taxation regime which can only help in economic growth. The only issue is the rate applicable to almonds causing disparity with other comparable nuts and dry fruits. This creates inconsistencies within the nut category, making it more difficult for consumers to afford a healthy nutritional product. We are confident that the GST Council will consider this aspect and take a consistent approach across all tree nut/groundnut categories.”

Emily Fleischmann, Senior Director, Global Marketing, Almond Board of California says the board sees India as a significant growth market. “We’re currently allocating about 10 percent of our very significant annual budget to India ($6 million approximately) and that commitment will continue. Our committee members make the decision of where the money goes each year and sitting around that table, it is pretty unanimous that India is right for the future.

Best job ever? This California island offers $130,000 to look after lighthouse