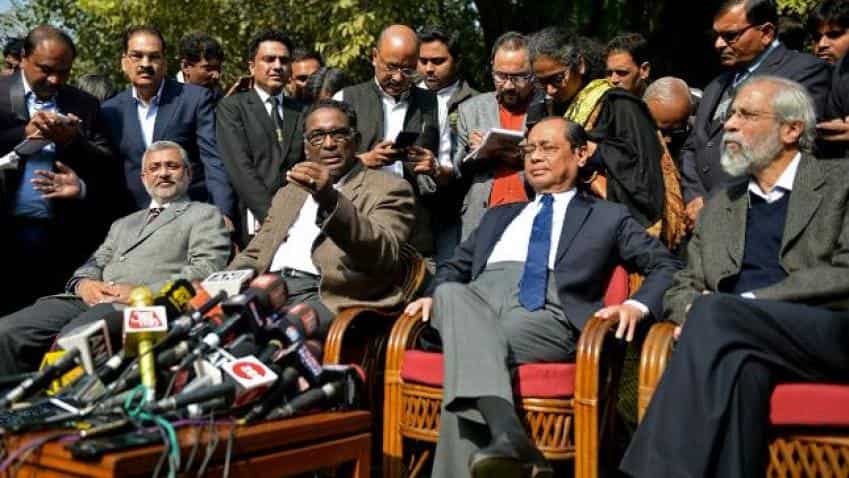 BCI President Manan Mishra has said it was "most unfortunate" that four senior judges held a press conference, sending out a message that all was not well with the Supreme Court. Image source: Reuters
Written By: IANS
RELATED NEWS

All law students, save in final year, to be promoted, says BCI

A seven-member delegation of the Bar Council Of India (BCI) on Sunday met two Supreme Court judges in an attempt to persuade them to resolve the crisis facing the highest judiciary.

The BCI on Saturday decided that a delegation would meet a majority of Supreme Court judges on Sunday so that the crisis can be resolved at the earliest.

"The council is of the unanimous view that it is an internal matter of the Supreme Court. The Council has hope and trust that the judges of the Supreme Court would realise the seriousness of the issue and in future they may avoid any such situation which the politicians or political parties could take undue advantage and or which could cause harm to our judiciary," the BCI said in a statement on Saturday.

The council has requested political parties and politicians not to criticise the judiciary or make it an issue as it would weaken the independence of judiciary, which is the protector of democracy.

BCI President Manan Mishra has said that it was "most unfortunate" that four senior judges held a press conference, sending out a message that all was not well with the Supreme Court and that the issue should have been "sorted out internally".

Mishra has also said it was a "family dispute" and should be resolved within the judiciary. But he felt the judges should not have gone to the media with their complaints.

The four judges -- Justice J. Chelameswar, Justice Ranjan Gogoi, Justice Madan B. Lokur and Justice Kurian Joseph -- on Friday took on the Chief Justice over allocation of cases, saying the administration of the top court was "not in order".

All law students, save in final year, to be promoted, says BCI