Madan Sabnavis and Anuja Shah economists at Care Rating said, “Performance of  in FY18 will depend on how the manufacturing sector fares as this is required for revival in growth in bank credit. With a share of above 40%, it is the driving force." 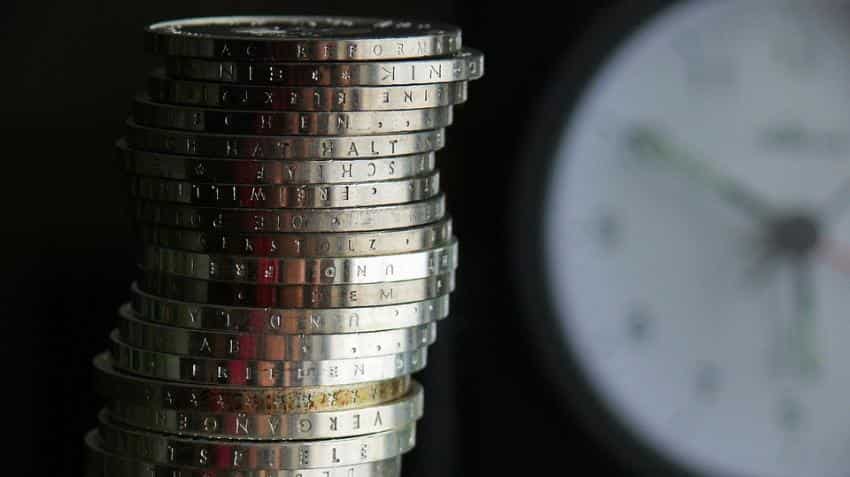 Prime business of banks, i.e. loan disbursement, will rise slightly in the current financial year after falling to a six-decade low.

Slowdown in the credit growth has been led by banks' stressed and bad loans, stagnant corporate investment environment and some migration to the corporate debt market where interest rates were more elastic to policy rate changes. Also, last five months of FY17 where credit growth reached into negative territory as a byproduct of demonetisation. 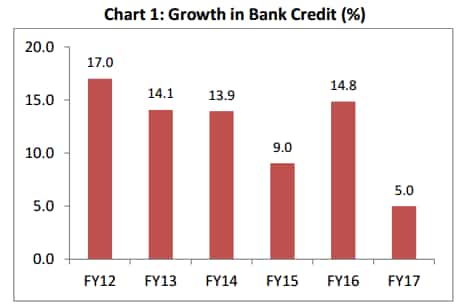 Almost all sectors saw a decline growth rate in credit disbursement FY17 starting with credit to agriculture sector which came down to 5.7% in FY17. 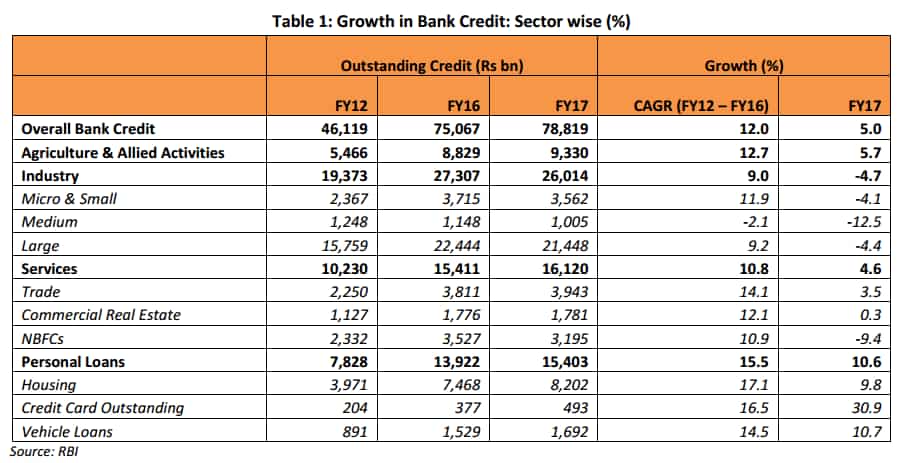 Not only, this share of credit towards industry reduced to 38.4% in FY17 compared to 40.7% from FY12-16. While credit to remaining category saw surger in their share during FY17.

Crisil, in its report said, “We expects bank credit growth to remain muted at 8-10% in fiscal 2018, led by low industrial capital expenditure and continued refinancing through bond markets. Retail sector growth will continue to show higher growth as consumption demand gradually picks up and cost of borrowing falls.”

Madan Sabnavis and Anuja Shah economists at Care Rating said, “Performance of  in FY18 will depend on how the manufacturing sector fares as this is required for revival in growth in bank credit. With a share of above 40%, it is the driving force."

The duo further added, "With the increase in commodity prices, the absolute demand for loans could come up. With overall GDP growth expected to be only moderately better in FY18. We expect the credit to grow between 7-8% in this fiscal with industrial growth of credit to be around 5-6%.”

Alok Shah, Banking Analyst, Centrum Broking, said, "One of the reasons for moderation in credit growth could be attributed to shift in credit demand towards non-bank channels like corporate bond and commercial papers."

Bonds and Commercial Paper (CP) has emerged as important source of funding for industries, as the flows into key investor segments such as mutual funds and insurance companies remain high. Corporate bond book has been growing at 16-18% year-on-year for the past 12 months in India.

Recently to revive banks credit growth RBI in its minutes of meeting said, "Along with re-balancing liquidity conditions, it will be the Reserve Bank’s endeavor to put the resolution of banks’ stressed assets on a firm footing and create congenial conditions for bank credit to revive and flow to productive sectors of the economy."