Banking operations across India were crippled for the second successive day owing to the strike by over 10 lakh bank employees demanding an early wage settlement, said the unions. 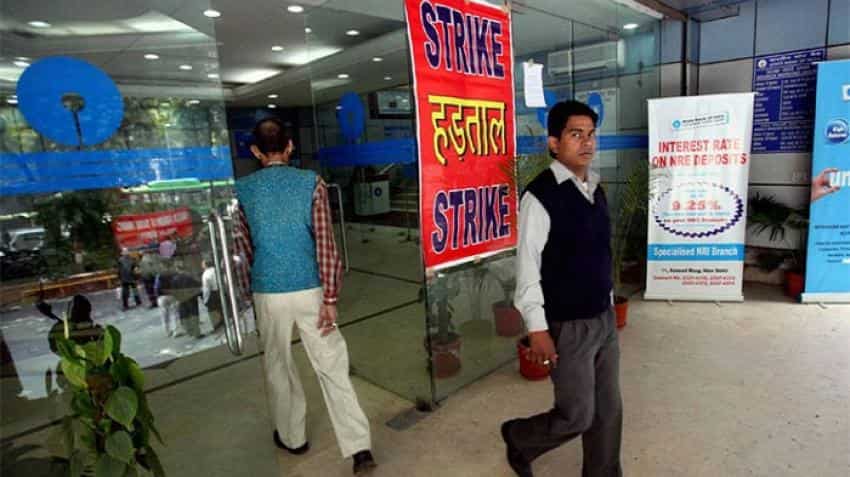 Banking operations across India were crippled for the second successive day owing to the strike by over 10 lakh bank employees demanding an early wage settlement, said the unions. The unions squarely blamed the Indian Banks` Association (IBA) for forcing them to resort to a two-day strike, impacting banking transactions worth around Rs 43,400 crore.

"The two-day strike was a huge success," All India Bank Employees` Association (AIBEA) General Secretary C.H. Venkatachalam told IANS. "It is the IBA which has put the banking public to trouble and not the unions. The unions had given strike notice 20 days before the actual strike. The IBA did not respond to that," he added.

All India Bank Officers` Confederation (AIBOC) General Secretary D.T. Franco also told IANS that it was the IBA which has to be blamed for the strike. "Even for the conciliation meeting called by the Chief Labour Commissioner (Delhi), the IBA had sent a junior official who had no authority," he said.

In the northeastern states, banking operations were affected severely as most branches of major banks remained closed and most of the ATMs ran out of cash. Leaders of the striking employees claimed that the response of the bank strike was tremendous in all northeastern states.

Many branches of the private banks also remained closed on Wednesday and Thursday due to the pressure of the agitating bank employees` organisations.

However, the union officials said it would be the protesters who would bear the brunt.

"While the IBA has put the customers to difficulty, it is the banks which will be saving cost or earning income due to the two-day strike. The staff will not be paid wages for the period they were on strike and there will be saving on power costs as the offices were closed," Venkatachalam said.

The United Forum of Bank Unions (UFBU), an umbrella body of nine bank unions, called for the two-day strike that started on Wednesday.

Venkatachalam said the unions had requested the IBA to come up with a better offer than the mere two per cent hike offer, so that the strike could be averted.

He said the IBA was also asked not to delink the wage negotiations for bank officers in the Scales 4-7 but it did not do anything.

At the conciliation meeting on Monday, the Chief Labour Commissioner (CLC) asked the IBA not to raise new controversies like delinking the wage talks for officers in the 4-7 scale, he said.

"Though the CLC tried its best to sort out the strike issues, there is no positive developments," Franco had said earlier.

Wage revision in the banks was due from November 1, 2017 and according to Venkatachalam, the Central government had been advising the IBA to conclude the wage issue before this date.

Unions had submitted the Charter of Demands in May 2017 and discussions commenced with them that month. But even though several rounds of discussions in the last one year, the IBA did not come forward with an offer.

On May 5, the IBA made an offer to hike the wages by two per cent, quoting poor financial condition of the banks as a reason. This offer was not acceptable to the unions.

According to Franco and Venkatachalam, the IBA began the wage talks with five per cent hike during the last settlement.

"Over the years the wage cost for the banks are declining as experienced employees are retiring in large numbers and there is no commensurate new recruitment," Venkatachalam said, adding that he is not against the mechanism of annual talks for wage revisions instead of the elaborate negotiations at the end of every five years, strikes and other time consuming matters.

"It is the government and the management who are not in favour of annual pay hikes. We are for working out some mechanism for such an action," he said.

Franco said: "There are some pros and cons. There is a proposal to do away with the wage settlements in the Wage Board Bill."

The nationwide strike also evoked great response for the second day too with more than 80,000 bank branches remaining closed.

Venkatachalam said that banking transactions worth about Rs 21,700 crore could not be put into effect across the country on Thursday.

A total of banking transactions worth about Rs 43,400 crore were affected during the two-day strike.

"However, these transactions would be completed when the banks open their shutters on Friday. But for the bankers, their two days` wages were lost due to the inaction of the IBA," Venkatachalam said.