All the arrested accused have been charged under various provisions of the Indian Penal Code and Prevention of Corruption Act, pertaining to cheating, forgery, criminal conspiracy and breach of trust. 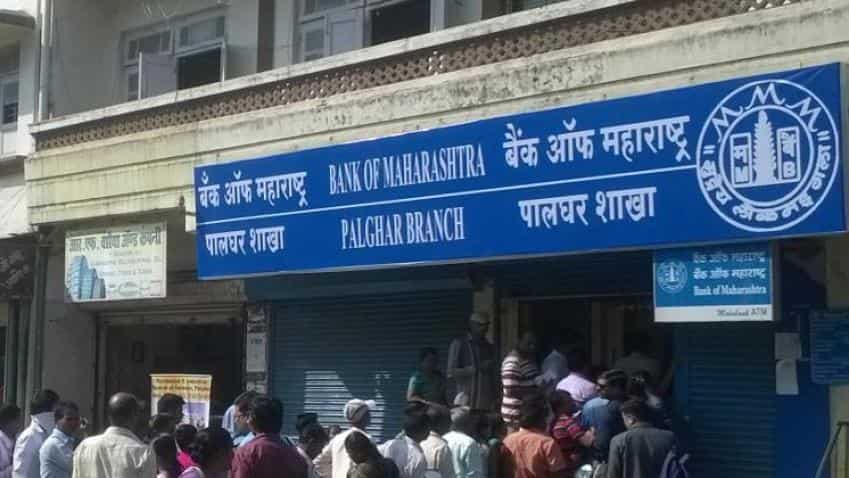 Bank of Maharashtra is ranked among the leading PSBs in India. Image source: PTI
Written By: ZeeBiz WebTeam
RELATED NEWS

Bank of Maharashtra share price hit its 52-week low, dipping a whopping 7 per cent after economic Offences Wing (EOW) arrested Ravindra P Marathe, the Chairman and Managing Director of Bank of Maharashtra, and six others in a case of around Rs 2,043 crore fraudulent loans extended to Pune's DSK Group. The stock dipped as much as 7.20 per cent to Rs 12.50 on the BSE.

The 83-year-old Pune-headquartered Bank of Maharashtra is ranked among the leading PSBs in India.

They were produced before a Pune court which sent them to police custody till June 27, an official said.

Following a complaint lodged by Jitendra N Mulekar, an investor who is a senior citizen, Marathe and others were arrested by the EOW sleuths for allegedly misusing their powers to sanction huge amounts of loans to shell companies.

According to the investigators, the bank's top executive and other officials colluded with the DSK Group "with dishonest and fraudulent intentions to sanction and disburse the amount of the bank (BoM)" under the garb of loans and the money was later siphoned off.

All the arrested accused have been charged under various provisions of the Indian Penal Code and Prevention of Corruption Act, pertaining to cheating, forgery, criminal conspiracy and breach of trust.

The Pune-based mega group's owners D S Kulkarni and his wife Hemanti were arrested in February on charges of cheating over 4,000 investors of over Rs 1,150 crore and diverting bank loans of nearly Rs 2,900 crore.

Among the charges are false papers showing purported loans received from other banks like State Bank Of India, Union Bank Of India, Syndicate Bank, IDBI Bank, Vijaya Bank and others, clearing loans without following due procedures or exercising due diligence.

With Wednesday's six arrests, the total number of accused in all the cases filed so far has gone up to 19, even as further investigations are underway.

As a follow-up in the case, the Maharashtra government last month ordered attachment of more than 120 properties, 275 bank accounts and four dozen vehicles belonging to the owners and the company invoking the provisions of Maharashtra Protection of Interests of Depositors Act, 1999.