Mother nature is full of surprises as it keeps on showing unique phenomenon in different parts of the world leaving people amazed. One such incident has happened in Bengaluru on Monday when a solar halo was witnessed by the residents in the state. 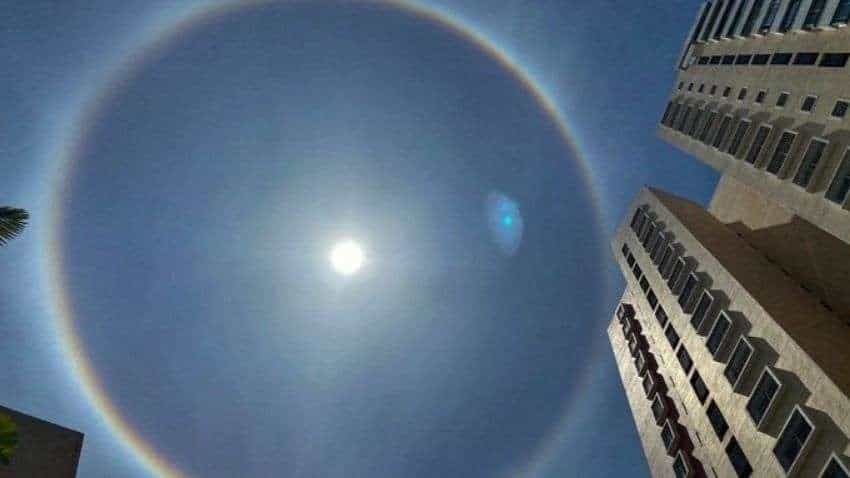 Mother nature is full of surprises as it keeps on showing unique phenomenon in different parts of the world leaving people amazed. One such incident has happened in Bengaluru on Monday when a solar halo was witnessed by the residents in the state.

A rainbow-like halo circled the sun in the state today and was captured by several people living there. The clicks of the unique phenomenon is now going viral over the internet.

One of the Twitter user named Samyukta Hornad tweeted "A rainbow-like halo has encircled the sun in a perfect circle right now. Call it magic, call it true :) The phenomenon is called a halo n happens because of light interacting with ice crystals in the atmosphere. Owing to its radius around the sun."

Singer Vishal Dadlani too took to his Instagram account to share a few images of the phenomenon and wrote, “Hey Bengaluru….look up! Nature is doing a Crystal Refraction magic trick to brighten up your lives! Sun Halo. Swipe through and tell me which picture is trippiest!"

What is solar halo?

Solar halo is an atmospheric optical phenomenon which occurs due to the interaction of light with ice crystals suspended in the troposphere (layer of the atmosphere).

When the light from the sun disperses through these suspended ice crystals, then it produces lights with several colours at 22 degrees and form a ring surrounding the Sun and hence forming a solar halo, according to an article by zeenews.india.com.