Ayushman Bharat (Modicare) Yojana: What you must know not to fall prey to frauds 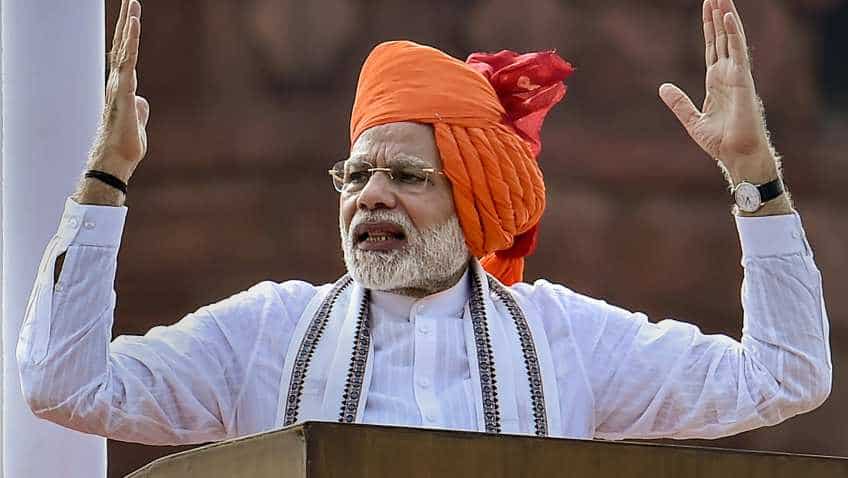 Prime Minister Narendra Modi addresses the nation from the ramparts of the historic Red Fort on the occasion of the 72nd Independence Day, in New Delhi on Wednesday, August 15, 2018. Image: PTI
Written By: ZeeBiz WebTeam
RELATED NEWS

Ayushman Bharat ( Modicare ) Yojana: Prime Minister Narendra Modi on Wednesday announced the official launch date of Pradhan Mantri Jan Arogya Abhiyaan (Ayushman Bharat), also termed by many as Modicare, on September 25, which is the birth anniversary of Pandit Deendayal Upadhyay. Addressing the nation on the 72nd Independence Day, PM Modi said the "healthcare initiatives of the government will have a positive impact on 50 crore Indians."

"It is essential to ensure that we free the poor of India from the clutches of poverty due to which they cannot afford healthcare," he added.

The Ayushman Bharat scheme aims to provide a coverage of Rs 5 lakh per family annually, benefiting more than 10 crore poor families. However, even before the official launch of the scheme, some fraudsters have started trying to dupe people of their hard-earned money by promising to enrol them in the scheme in lieu of money.

Ayushman Bharat CEO Indu Bhushan today warned people from falling prey to frauds. While talking to Zee Business, Bhusan explained everything about the ambitious scheme and how one can benefit from it.

- Cashless system: No need to pay cash at any transaction point.

- Paperless scheme, IT-based: All records to be kept safe in digital format, helping beneficiaries from hassles.

- No premium to be paid by beneficiaries: Bhushan said, "In the last few days, few websites have come up, asking people to pay a enrol and pay a premium of Rs 1000-Rs 1200. These are fake websites trying to cheat innocent people."

-  No enrolment needed, beneficiaries already selected: Bhushan said, "Officially no enrolment is being done as the government already has a list of 50 crore beneficiaries. No new names will be added to the list. Initially, only those in the list will get the benefit of the scheme."

- Software to launch the scheme is ready and being tested in 14 states. "In the next 40 days, we will have to complete tasks like empanelment of hospitals, making the software fool-proof etc."

How to know if your name is in the beneficiary list

Bhushan explained several steps planned by the government to inform the beneficiaries about their name in the list:

- Prime Minister Narendra Modi will write letters to all selected beneficiary families. The letters would be printed and sent to the families in the next 40 days.

- Around three lakh common service centres across the country would also have the list of beneficiaries.

- The government is also creating a call centre where people can all on '14555' to find out their names in the list of beneficiaries.