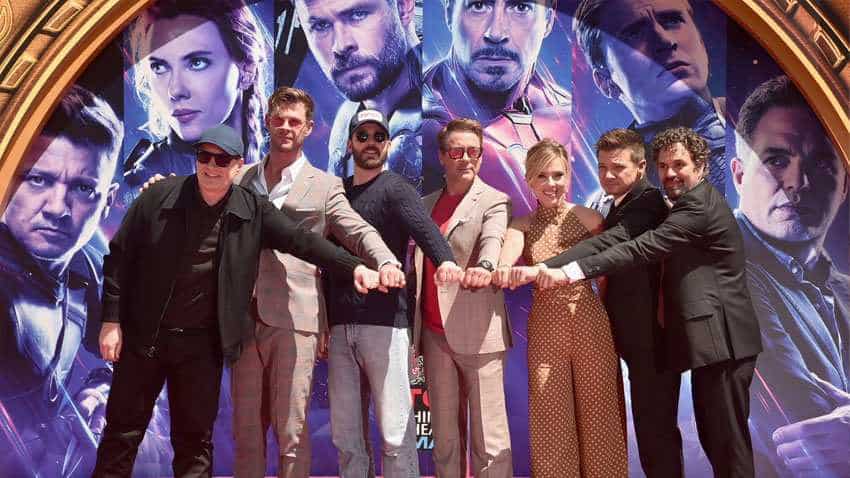 To accommodate the demand for the last of the Avenger series, which releases on Friday, some theatres are running shows 24X7.
Written By: PTI
RELATED NEWS

"The things we do for love," is how a Marvel fan reacted when he managed to book a 1.40 am show for "Avengers: Endgame". It seems odd to quote Jaime Lannister from "Game of Thrones" in the "Avengers" context but such is the frenzy that fans will watch any show they can over the weekend -- whether at 1.40 am or at 6 am -- even if it means spending big bucks.  And still no tickets are available.To accommodate the demand for the last of the Avenger series, which releases on Friday, some theatres are running shows 24X7.

"It is the biggest craze we have seen for a Hollywood film... The demand is ferocious... As far as IMAX is concerned, it is unprecedented. This is the first time a film is sold out all days of the first week even before a single show has played out. Almost the entire week is sold out," said Kamal Gianchandani, CEO, PVR Pictures.

"We have added shows as early as 6.30-7am, which we typically do for Hindi films and big regional films. Almost 70 per cent of PVR chain across the country is allocated to 'Avengers: Endgame'... The demand is universally good in Hindi, Tamil and Telugu," Gianchandani told PTI.
Movie ticket booking site BookMyShow said the film has sold over 2.5 million tickets in advance booking across the country, a record for a Hollywood movie in India.

"The frenzy around the film is unprecedented. The cinemas are doing everything possible to match fans' demand for the film, including round-the-clock screenings as also opening up advance bookings for the entire week ahead.

"As the craze around the film continues to intensify, we expect a mighty opening on Friday and a record-breaking first week," said Ashish Saksena, COO, Cinemas, BookMyShow.

The record for the highest opening for a Hollywood movie in India is held by "Avengers: Infinity War", which earned Rs 40 crore on the opening day. However, the inaugural weekend figures of its follow-up, "Endgame" are being pegged to go beyond Rs 50 crore. The opening weekend figures may hover around Rs 150 crore plus, trade analyst Komal Nahata told PTI.

"Endgame", directed by Anthony and Joe Russo, is a culmination of 22 storylines from the Marvel stable. In the film, the remaining superheroes gather to avenge their fallen comrades after super villain Thanos wiped out half of the universe's population with a finger snap in "Infinity War".
Nahata said the craze for the movie is unrivalled in India. There was similar euphoria during the opening weekend of Baahubali 2". "This kind of euphoria for advance booking was last seen during 'Baahubali 2' and for 'Dilwale Dhulania Le Jayenge' as far as Indian films are concerned. Otherwise, Hollywood films like 'Fast and Furious' and 'Jungle Book 2' were popular. The film should open at Rs 50.5 crore on the first day and about Rs 150 crore over the weekend," he said.

Rajender Singh, chief programming officer, INOX Leisure Ltd, said the response for advance booking has been phenomenal in both metro cities as well as second and three tier cities, where the dubbed version of the film will be screened.

"It has broken all records as far as the advance booking of any film is concerned. No Indian film has witnessed this kind of craze. We opened the advance booking last Sunday and the shows are full till Tuesday. We have sold out close to eight lakh tickets, which is huge. The closest Indian film that comes to this is "Baahubali 2", we had sold tickets 4.5-5 lakh tickets," Singh told PTI.  He said INOX, which has 578 screens across India, is running shows from Friday as early as 6 am in some theatres. In metro cities, they will be running shows 24x7 for the first two days.

Distributor Rajesh Thadani believes the film will open at Rs 50 crore on the first day.  "Going by the advance booking for the film and the craze for the film in India especially among youngsters it should open at least at Rs 50 crore. Over the weekend, it should gross close to Rs 200 crore. It is a big franchise so the numbers are also going to be huge."

Manoj Desai, executive director of G7 Multiplex in Mumbai, says the film will be screened both in English and Hindi at his popular single-screen theatre Gaiety, Galaxy and Gemini at reasonable prices. "We opened late for advance booking so we have had 70 percent booking so far. This film is meant for every class of audience. Those who can't afford to pay much for tickets at multiplexes have come here. And for them we have priced our tickets at Rs 170 for English version and Rs 160 and Rs 130 for Hindi," he said

Rahul Kadbet, vice president, Programming, Carnival Cinemas, said the chain has late night shows at 1.25 am and 2.15 am shows in Pune over the weekend and even a a 3.20 am show in Mumbai.

The mad rush for the tickets has already inspired various memes in social media, with one showing a crowd rushing towards a mall to get their hands on tickets.