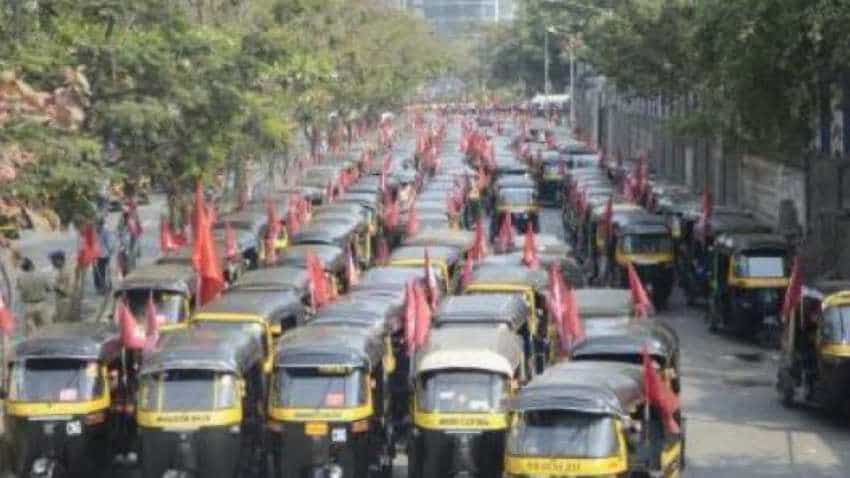 Mumbai would have been the worst-hit with around 200,000 auto-rickshaws and nearly 300,000 drivers where millions depend on these three-wheelers daily. Image source: IANS
Written By: ZeeBiz WebTeam
Edited By: Harish Dugh
RELATED NEWS

Autorickshaw strike today: In a big relief for travellers in Mumbai and other regions of the state, the 300-odd autorickshaw unions in Maharashtra have decided to call off their proposed indefinite strike from midnight, following an appeal by Chief Minister Devendra Fadnavis. Notably, the indefinite strike call was given on Monday, demanding a crackdown on illegal auto-rickshaws, aggregator services like Ola-Uber, and a steep fare hike.

Withdrawing their strike call in Mumbai, Autorickshaw Malalk Chalak Sanghatana Joint Action Committee (JAC) President Shashank Rao has reportedly stated that the Chief Minister has invited the unions and the state Transport Minister for a joint meeting at his office on Tuesday afternoon to hammer out the unions` demands.

Rao was quoted by IANS as saying, "We are hopeful that our issues will be resolved amicably tomorrow. We are grateful to the CM for intervening in the issue," and added that the JAC has decided to withdraw their agitation immediately to avoid inconvenience to lakhs of commuters.

Rao told IANS, "Our main demands are: a crackdown on illegal auto-rickshaws which hits the business of the licensed auto-rickshaws, a ban on Ola-Uber services which flout government regulations besides hampering the three-wheelers` business and a hike in auto fares."

Among other demands included comprise implementation of the Hakim Committee Report, a hike of Rs 4-6 per km in the fare, stringent control over issuing new permits, a welfare board for auto-drivers with facilities like provident fund, medical and employees state insurance scheme.

Mumbai would have been the worst-hit with around 200,000 auto-rickshaws and nearly 300,000 drivers where millions depend on these three-wheelers daily. Other cities would have been affected include Thane, Navi Mumbai, Pune, Nagpur, Aurangabad, Nashik, Latur, Kolhapur along with other towns in the state.

According to report, lakhs of daily commuters who hop onto auto-rickshaws to railway stations or bus stops for their onward commute, and return, school and college students in Mumbai would have been badly hit by the proposed strike.