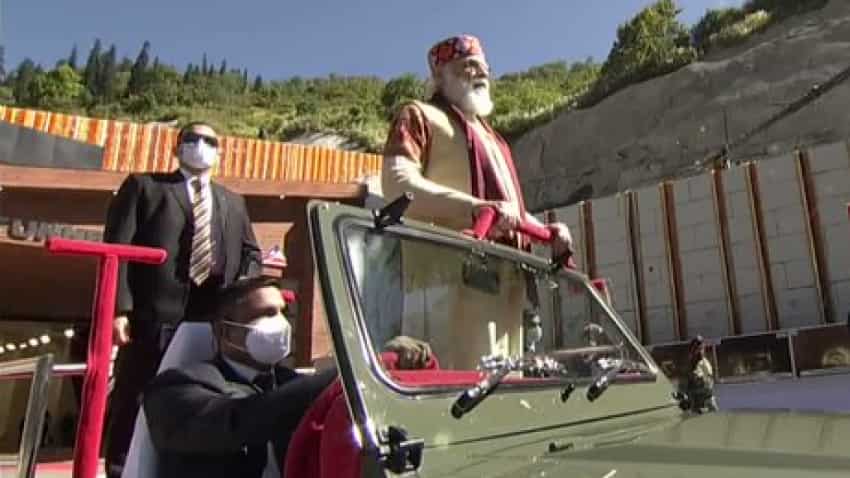 Atal Tunnel Inauguration: Prime Minister Narendra Modi inaugurated the much-awaited Atal Tunnel in Rohtang, Himachal Pradesh today. While inaugurating PM Modi said taht it's a historic day as not only dream of Atal ji realised but also decades-long wait of people of Himachal is over. He also said that the tunnel will work as life line for two new Union Territories — Leh and Ladakh too. Taking a dig at the UPA government PM Modi said, by 2013-14, only 1300 meters of tunnel was built; experts say had work been done at this speed, it would have been completed by 2040.

After attending the inauguration function, the Prime Minister will be participating in public functions at Sissu in Lahaul Spiti and at Solang Valley. The horseshoe-shaped tunnel will cut down the distance between Leh and Manali by 46km and the travel time by four to five hours, in Himachal Pradesh’s Rohtang.

1] Atal Tunnel is brain child of Atal Bihari Vajpayee who took the decision to construct Atal Tunnel was taken on June 3, 2000. The foundation stone for the tunnel was laid on May 26, 2002.

2] On 25 December 2019, the Rohtang tunnel was renamed as Atal Tunnel in the memory of Atal Bihari Vajpayee.

3] Atal Tunnel is located at a distance of 25km from Manali at an altitude of 3,060 meters.

4] The 9.02km long tunnel has been built with ultra-modern specifications in the Pir Panjal Range of the Himalayas.

5] Atal Tunnel, which is the longest highway tunnel in the world, reduces the road distance by 46km between Manali and Leh and the travel time by about four to five hours.

6] It is a horseshoe-shaped, single tube double lane tunnel with a roadway of 8 metres and an overhead clearance of 5.525 metres.

8] The tunnel is 10.5-metre wide and a 3.6x2.25 metre fireproof emergency egress tunnel has been built into the main tunnel itself.

9] The tunnel is equipped with various security features such as CCTV cameras, telephone connections at every 150 metres for any emergency, fire hydrant mechanism at every 60 metres and auto incident detection system.

10] There are evacuation lighting and exit signs at every 25 metres and broadcasting system throughout the stretch.