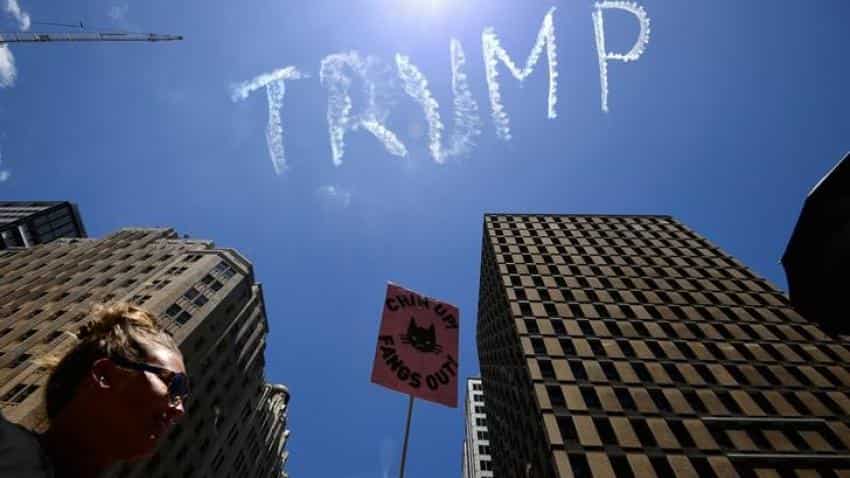 The name of U.S. President Donald Trump can be seen in the sky above a protester as she carries a sign during the first of hundreds of womens'' marches organized around the world in a show of disapproval of the new President. Image Source: Reuters
Written By: Reuters
RELATED NEWS

In a defiant inaugural address, Trump said U.S. workers have been devastated by an outflow of jobs overseas, one of the main themes of a divisive campaign that emphasized making America strong again.

In Japan, one of Washington`s oldest and staunchest Asian allies, newspapers across the political spectrum criticised the new administration, with more than one saying the world was now in "unpredictable territory."

"Has there ever been a new U.S. administration that began by spreading unease, not expectations, throughout the world?" said the conservative Yomiuri Shimbun, adding that Trump appeared ready to take both alliances and global norms lightly if they didn`t benefit the United States.

The liberal Asahi Shimbun went further and said Trump, who called on allies like Japan and South Korea to shoulder a greater share of defense costs or face the possible withdrawal of U.S. troops, posed a risk to the freer global order born after World War Two and the Cold War.

"Will the unpredictable Trump whirlwind cross the U.S. borders to spread division and conflict? The new master of the White House must realise the heavy responsibility that accompanies his words and actions", it said.

State media in China, accused of stealing U.S. jobs during Trump`s campaign, said they hoped his government understood the importance of relations with China but that Beijing should also brace for the worst.

"What`s crucial is to control and manage disputes and find a way to resolve them," said the overseas edition of the ruling Communist Party`s official People`s Daily.

Worry about friction between the two superpowers loomed over many in the region.

"As an exporting nation reliant on both China and the U.S., we would suffer from greater U.S. protectionism and any trade war," said the Sydney Morning Herald.

"We may have to negotiate our way through a new world order not just regarding trade and China but also climate, Russia and regional security given Trump`s lack of interest in the U.S. playing the role of sheriff."

A less-engaged Washington could also lead to shifting alliances and more reliance on regional networks.

"India must not only prepare for a more protectionist America, but also prepare of a United States that does not plan to mess around with other people`s affairs or squander blood and treasure in the name of promoting democratic values," wrote policy analyst C. Raja Mohan, head of Carnegie India, in the Indian Express.

A few said they expected U.S. political institutions to prevail and that Trump should be given the benefit of the doubt as the duly-elected U.S. leader. "It is wisest to hope he succeeds," added The Australian in an editorial titled "President Trump Seals the Deal."

But uncertainty prevailed for the most part.

"Under Trump, the United States is apt to be as edgy and unpredictable as his former television reality show," said Thailand`s The Nation on Friday.

"The reality show has become reality. We are about to discover whether America can become great again - and whether the word `great` takes on unexpected meanings."