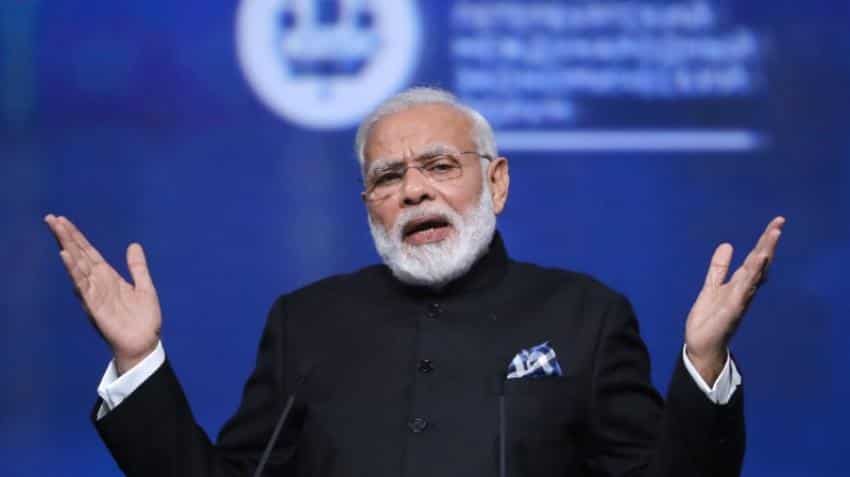 The United States is expected to authorize India`s purchase of a naval variant of the Predator drone, a source familiar with the situation said on Thursday, ahead of a visit next week by Indian Prime Minister Narendra Modi to try to revitalize ties in his first meeting with President Donald Trump.

Securing agreement on the purchase of 22 unarmed drones, worth more than $2 billion, is seen in New Delhi as a key test of defense ties that flourished under former President Barack Obama but have drifted under Trump, who has courted Asian rival China as he seeks Beijing`s help to contain North Korea`s nuclear program.

The deal would still require approval by Congress. California-based General Atomics, the maker of the Guardian drone sought by India, declined to comment.

Modi`s two-day visit to Washington begins on Sunday. Trump met Chinese President Xi Jinping in April and has also had face time with the leaders of nations including Japan, Britain and Vietnam since taking office in January, prompting anxiety in New Delhi that India is no longer a priority in Washington.

The Indian navy wants the unarmed surveillance drones to keep watch over the Indian Ocean. The deal would be the first such purchase by a country that is not a member of North Atlantic Treaty Organization.

"We are trying to move it to the top of the agenda as a deliverable, this is something that can happen before all the other items," said an Indian official tracking the progress of the drone discussions in the run-up to the visit.

India, a big buyer of US arms that was recently named by Washington as a major defense ally, wants to protect its 7,500- km (4,700-mile) coastline as Beijing expands its maritime trade routes and Chinese submarines increasingly lurk in regional waters.

But sources tracking the discussions say the US State Department has been concerned about the potential destabilizing impact of introducing high-tech drones into South Asia, where tensions are simmering between India and Pakistan, particularly over Kashmir, which is divided between them.

Other strains have emerged in US-India relations, with the United States vexed by a growing bilateral trade deficit and Trump accusing New Delhi of negotiating unscrupulously at the Paris climate talks to walk away with billions in aid.

US officials expect a relatively low-key visit by Modi, without the fanfare of some of his previous trips to the United States, and one geared to giving the Indian leader the chance to get to know Trump personally and to show that he is doing so.

Modi is also not expected to press hard on a US visa program the Trump administration is reviewing to reduce the flow of skilled foreign workers and save jobs for Americans, seeing limited gains from raising a sensitive issue, they said.

FALLING OFF THE RADAR

"There is a palpable fear in New Delhi that the new US president`s lack of focus on India, and limited appointment of South Asia focused advisors, has resulted in India falling off the radar in Washington," Eurasia Group`s Shailesh Kumar and Sasha Riser-Kositsky said in a note.

Defense deals are one area where the two countries could make progress because of bipartisan support, an Indian official involved in the preparations for the visit said.

The two sides have stepped up efforts in recent weeks to get clearance for the sale of the Guardian drone.

India has raised the issue of the drones with the Pentagon three times since June 2016, officials said.

US Senators John Cornyn and Mark Warner wrote in March to Defense Secretary James Mattis and Secretary of State Rex Tillerson saying the Guardian deal would advance US national security interests and protect US jobs.

An industry official involved in promoting India-US business ties said the drone sale enjoyed support from the White House and Congress, and was awaiting clearance from the State Department.

While the Guardian drones India wants are unarmed, it originally asked for missile-firing Predator Avenger aircraft, a request turned down by the Obama administration.

Sources say there is some concern in the State Department that if India were to get the surveillance drones, it would renew its push to acquire armed drones, which its military has eyed ever since they were deployed by US forces against militants in Pakistan.

US export laws typically prohibit the transfer of such arms to a country unless it is fighting alongside US forces.

India and the United States will also discuss the sale of US fighter jets during Modi`s trip, in what could be the biggest deal since they began deepening defense ties more than a decade ago.

On Monday, Lockheed Martin announced an agreement with India`s Tata Advanced Systems to produce F-16 planes in India, provided it won a contract to equip the Indian Air Force with hundreds of new aircraft.

Lockheed has offered to shift its ageing F-16 production line from Fort Worth, Texas, as part of Modi`s "Make-in-India" drive while it ramps up production of the high-end F-35 aircraft at home.

Since Trump`s election on an "American First" platform, US and Indian officials have sought to play down any contradiction between his stated desire to protect American jobs and Modi`s "Make in India" policy, arguing, for example, that deals in which components made in the United States are shipped to India for assembly benefit workers in both countries.