PP Choudhary, MoS  Corporate Affair & Law & Justice Minister, in an exclusive interview with Zee Business, said there is no definition for cell companies under the Companies Act, however, Section 248 provides provisions to strike off such companies that fail in filling its annual financial results. 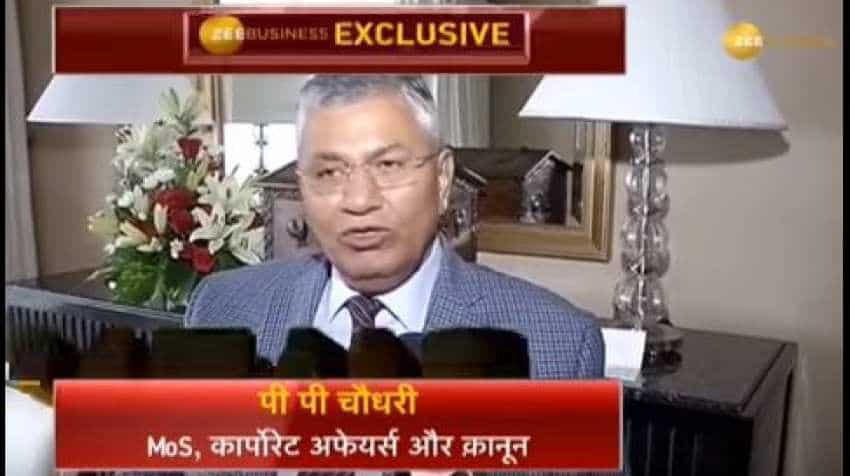 PP Choudhary, MoS  Corporate Affair & Law & Justice Minister, in an exclusive interview with Anurag Shah, Zee Business, said there is no definition for cell companies under the Companies Act, however, Section 248 provides provisions to strike off such companies that fail in filling its annual financial results. He added the Artificial Intelligence will be introduced in the MCA 21 soon. Edited Excerpts:

Q: There were talks that the second list of the cell companies will be released soon. Is there any update on it? Have you seized the money available in the bank accounts of the cell companies whose name were present in the first list or they have been transferred to some other account?
A: There is no definition of cell companies under the Companies Act but we consider them as the firms without any business. Section 248 of the Company Act provides a provision to stuck off companies who fails to file its annual returns of the financial year. Under the process, we issued notices to about 3 lakh companies and examined their responses and decided to stuck off 2.26 lakh companies in the first phase.

Further, we ordered the authorities to freeze their accounts and asked banks to provide figures related to the amount that was deposited in their accounts just before or during demonetisation. As a result, we came to know that there were certain companies that managed to deposit and withdraw a hefty sum of Rs 3,700 crore and Rs 2,384 crore in their respective accounts. Interestingly, we have submitted the names of such companies with irregular accounts in SFIO (Serious Fraud Investigation Office), Enforcement Directorate (ED) and other enforcement agencies of revenue ministry, where they are being examined.

Q: Earlier, you have said that the issue of Jet Airways will be investigated. Is there any update on the issue and by when an action will be taken on it?
A: See, an investigation is launched in cases where the ministry has some concrete information about the company or there are any complaints against it. The matter, of Jet Airways, is under inspection and we are checking their books and papers and that's why we can't say anything in relation to it.

Q: The Registrar of Companies (RoC) has been active for much nowadays. Do you have any plans to enhance powers of RoC?
A: Powers of RoC has been defined in the Companies Act and they are enough and that's why we don't have any plan to enhance its power. It has the scope to exercise its power in its own region but was not able to act against such companies due to an absence of such a move. The ministry, as well as the RoC, has a lot of work to do at present. In addition, under the able guidance of Prime Minister Narendra Modi, we are working hard to stop people from misusing the existing corporate structure of the country.

Q: My next question is related to Insolvency and Bankruptcy Code (IBC), which was brought in the process to solve the problems within 180 days but has failed to solve the problem as the cases are moving to courts. Do you think that IBC has partially met the intent for which it was brought in?
A: IBC is one of the biggest reform. As there was a time when banks were supposed to follow the footprints of the companies for recovery purpose but today it is a time, where the companies are paying. For instance, you can also approach NCLT with a request for insolvency even for the dues of a sum of Rs 1 lakh.

Under such a case, IBC is working as a deterrent making deters to pay their dues on time, which means it has helped in creating a different culture and a new ecosystem. The best part of IBC is that a sum of around Rs 1 lakh crore was deposited even before the application was admitted under NCLT.

Secondly, we have also recovered a sum of Rs 56,000 crore from the units which went for insolvency resolution under the process. When it comes to 180-days timeframe for resolution of the case is getting delayed due to the lack of manpower that is required under the law and for this purpose, we are opening new benches and courts at the places where it is needed. Secondly, new appointments, which is in pipeline, will help in meeting the IBC deadline and simply the ease of doing business requirements.

Q: Are you planning to come up with an individual IBC?
A: It is under consideration. We have provisions for the same and working on it at present. Thus, any decision related to it will be taken after examining the provisions.

Q: There were talks that the early-warning system and artificial intelligence will be attached with the balance sheets of the companies. Can you tell us about where the process has reached and by when it will be implemented across the country?
A: We have about 11.74 lakh companies in MCA 21 at present and are working on a plan to introduce artificial intelligence (AI) in the MCA 21 structure. At the same time, we will also have an emphasis on e-filing of the forms. Once completed the process will act as a trigger and highlight the irregular activities of any company. After which we can check the list of such companies through a filter as well as manually.

In addition, the ministry, as well as Prime Minister Narendra Modi, is eager to introduce Artificial Intelligence in the process as soon as it is possible.