Arguments between Finance Ministry and RBI are a good sign for the economy: Sanjeev Sanyal, Principal Economic Adviser

The economic growth of recent past is here to stay and continue well into the future because this growth is backed by certain policy decisions like GST and Insolvency and Bankruptcy Code (IBC), Sanjeev Sanyal, Principal Economic Adviser, Ministry of Finance, told Anil Singhvi, Managing Editor of Zee Business, in an exclusive talk. 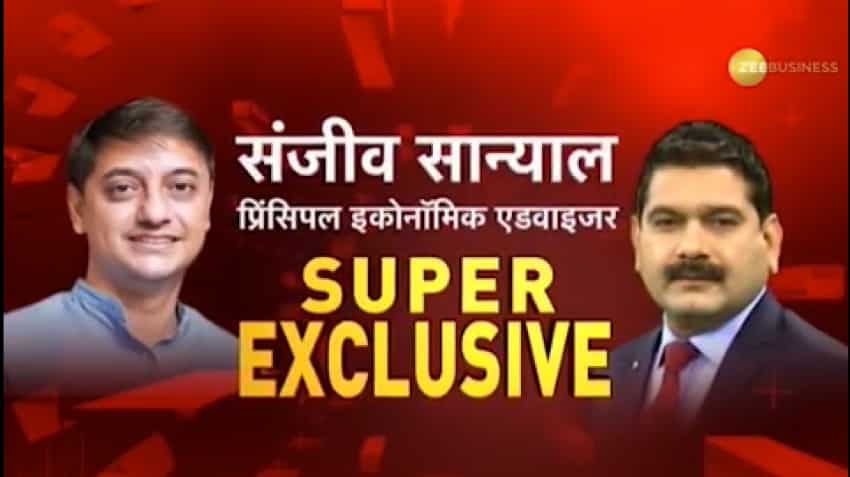 The economic growth of recent past is here to stay and continue well into the future as this growth is backed by certain policy decisions like GST and IBC, said Sanjeev Sanyal, Principal Economic Adviser, Ministry of Finance. Image source: Zee Business
Written By: ZeeBiz WebTeam
RELATED NEWS

Sanjeev Sanyal, Principal Economic Adviser, Ministry of Finance, in an exclusive talk with Anil Singhvi, Managing Editor, Zee Business, said the economic growth of recent past is here to stay and continue well into the future. This growth is backed by certain policy decisions like GST and Insolvency and Bankruptcy Code (IBC), he said.

He added that the existing problem of Non-performing assets (NPAs) in banks is not a  new one and has been in the system for a long time. So for the first time, 15-16 months ago the government thought to do something to end the problem of NPAs once and for all. As a result, 50 biggest NPAs were identified and IBC process against them were initiated. Here are the edited excerpts:

Q: Government's two biggest decisions, demonetisation and GST, were questioned by people. They asked what will happen to the growth of the country. But the recent growth rate says that we are rapidly moving towards 8 per cent growth. My first question is whether this speed of growth will be sustained or will it increase from here?

A: The speed will continue. This increase is backed by the few changes that were brought in over the past two years in the economic structure of the country. These changes have changed the fundamentals of the economy and its benefits will be visible in years and decades as well as to the generations that will come. I can explain what we have done in 1-2 minutes.

First, the implementation of GST, which has changed the taxation structure of the country with one tax replacing the existing multiple cascading taxes levied by the central and state governments.

Insolvency and Bankruptcy Code (IBC) is the second thing that has helped us to put a check on the increasing Non-performing assets (NPAs) in banks. It seeks to consolidate the existing framework by creating a single law for insolvency and bankruptcy. The law is a one-stop solution for resolving insolvencies and to auction the companies that are not able to pay the loans due to any reason within a decided time frame. In fact, it offers an economically viable arrangement. A strong insolvency framework where the cost and the time incurred is minimised in attaining liquidation has been long overdue in India.

The third thing is the new structure to control inflation and reduce the rate in a structured way. This is a tough task but we have succeeded in bringing it to a level of 4 per cent, which it is at present. It was achieved by constituting a Monetary Policy Committee. Interestingly, I have never seen such low retail inflation rates in my life.

Q: The bold steps of the government is an indication of its commitment towards growth. But at such a time, I would like to know about Reserve Bank's regulations on the Public Sector Banks (PSBs), which have been engaged in lending 65-70 per cent credit in India. Extra policing by the Reserve Bank has sent 11 PSBs of total 21 PSBs under the central bank’s Prompt Corrective Action (PCA) framework with an aim to check NPAs. Next 5-6 are on the waitlist to enter the framework. Now, how will the government be able to keep growth on the right tracks by having just 4 banks with it, namely SBI, BoB, Vijaya Bank and Indian Bank. How will you remove this mismatch?

A: Undoubtedly, the system has been allowed to function in a free way. Secondly, this problem of NPAs in banks are decades old, which made people think about doing something to rectify the problem and some clean-up action has been taken. But the problem was never given a permanent solution or it was not removed from its roots. This is the first time that we have planned to hit the problem at its roots and so for the first time, 15-16 months ago we thought to do something and bring the problem to a complete end. In February 2017, we identified 50 biggest NPAs and initiated the IBC process against them. Auction of Bhushan Steel is an example of the solution. Its auction helped us to fetch Rs 35,000 crore in cash and 12 per cent of its equity, which stands near Rs 5,000 to 6,000 crore. More such cases are in line for being auctioned like Electrosteel and Binani Cements.

In addition to this, we also looked into the accounts of the banks and saw scams in it like the Nirav Modi scam. The money that will be received by writing-off these NPAs will be used in recapitalising the banks and they will help the banks to expand itself.

Instead of debating on it by terming it as over policing, you can have a debate on the level of regulation of RBI. Interestingly, such a debate always exists between the RBI and the government.
This is the first time in five to six decades that someone has visited the accounts of the banks and had a close look on it. In fact, the problem has continued since 1955, the year when Mudra scam came into light.

Q: It means, the problems of banks is about the end?
A: Yes, it is the beginning and its pain is visible in the whole economy.

Q: I feel, the RBI is not able to sense the pain of the government. It has increased the key policy rate as well as the interest rates at least when the government is trying its best to bring the growth rate back on track. The rate hikes have been made at a time when inflation is at its lowest. It means the central bank in its effort to kill inflation has placed a nuclear bomb that may also kill growth.

A: We can have a long debate on it but the RBI is declining to go for it and we have empowered the monetary policy committee to take its own decisions in the interest of the country and its economy. The independence given to the central bank has helped us to contain the inflation to the 4 per cent level.