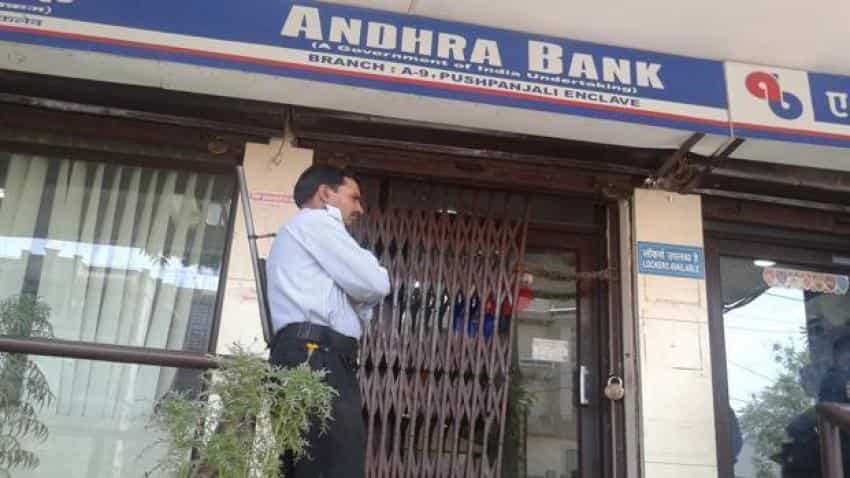 The stock of the public lender hit an intraday low of Rs 33.50 on the BSE. Image source: PTI
Written By: ZeeBiz WebTeam
RELATED NEWS

Shares of Andhra Bank tanked 13 per cent, hitting a 14-year low, after reports emerged of a financial fraud in Andhra Bank too, following Rs 12,500-crore scam in Punjab National Bank (PNB) that surfaced last month. The stock of the public lender hit an intraday low of Rs 33.50 on the BSE.  The Enforcement Directorate on Friday filed a supplementary prosecution complaint (charge sheet) against former Andhra Bank director Anup Prakash Garg in connection with a Rs 5,000 crore bank fraud involving the Vadodara-based Sterling Biotech Ltd (SBL) of the Sandesara group of companies.

The final report was filed before Additional Sessions Judge Sidharth Sharma against Anup Prakash Garg under the sections of Prevention of Money Laundering Act (PMLA). The chargesheet, filed through ED's special public prosecutor Nitesh Rana, alleged that during the probe, the agency came across "certain entries" in a diary seized by the Income Tax Department in 2011 which showed various payments totalling about Rs 15.2 million made to one "Mr Garg, Director, Andhra Bank" by Chetan Jayantilal Sandesara and Nitin Jayantilal Sandesara, directors Sterling Biotech, between 2008 and 2009.

"Various cash payments were made to Garg, as reflected in the said entries, on the instructions of the Sandesara brothers, by withdrawing cash from the bank accounts of several benami companies owned by them," it said.

This is the second (supplementary) chargesheet in this case after the agency filed one against Delhi based businessman Gagan Dhawan in this case last year involving the Vadodara-based company Sterling Biotech Pvt Ltd.
Garg (59) was arrested by the Enforcement Directorate (ED) in this case in January.

The 81-page chargesheet along with annexures, also called prosecution complaint under the PMLA, names Garg and his "beneficial onwership" firm-- RAG Buildtech Pvt Ltd as accused.

The agency said it has seized assets worth Rs 1.23 crore of Garg and his family which includes a flat in Indore, an agricultural plot in Dewas in Madhya Pradesh and four fixed deposits.

It said its investigation in the case found that "in the year 2008-2009 Garg had received nine cash payments to the tune of Rs 1,52,00,000 which was withdrawn from various accounts of Sterling Biotech Limited group companies and the same was eventually funded out of availed credit facilities by SBL group."

According to the ED, the group had "availed credit facilities of around Rs 23,500 lakh between 2006-2009 from Andhra Bank (which is the lead bank of consortium of banks with regard to credit facilities given to the SBL group) and in that period Garg was the director of Andhra Bank."

The ED said Garg "has been actively and actually involved in criminal activity and the properties acquired by Ms RAG Buildtech Pvt Ltd were found involved in the offence of money laundering which the accused projected as untainted property being beneficial owner of the said company."

It said many other properties involved in money laundering "need to be unearthed as there are suspected to be more than 300 benami and offshore entities involved in the diversion and misutilisation of the public money obtained fraudulently from various public sector banks."

The ED registered a money laundering case in this instance after taking cognisance of a CBI FIR.

It had alleged that the company took loans of over Rs 5,000 crore from a consortium led by Andhra Bank, which turned into non-performing assets.

The FIR had also alleged that the total pending dues of the group companies were Rs 5,383 crore as on December 31, 2016.

The court had on November 14 last year, issued open ended non-bailable warrants against the Sandesara brothers.

It claimed that Garg infused several crore of his unaccounted money in various companies through several Kolkata-based bogus shell companies, with the help of cash or cheque entry operators in Kolkata, in order to launder the proceeds of crime obtained by him from the Sandesaras.

Garg was arrested by the ED on January 12 and is currently in judicial custody.

He was named as an accused by the ED as well as the Central Bureau of Investigation (CBI).

The ED had lodged the money laundering case after taking cognisance of an FIR lodged by the CBI.