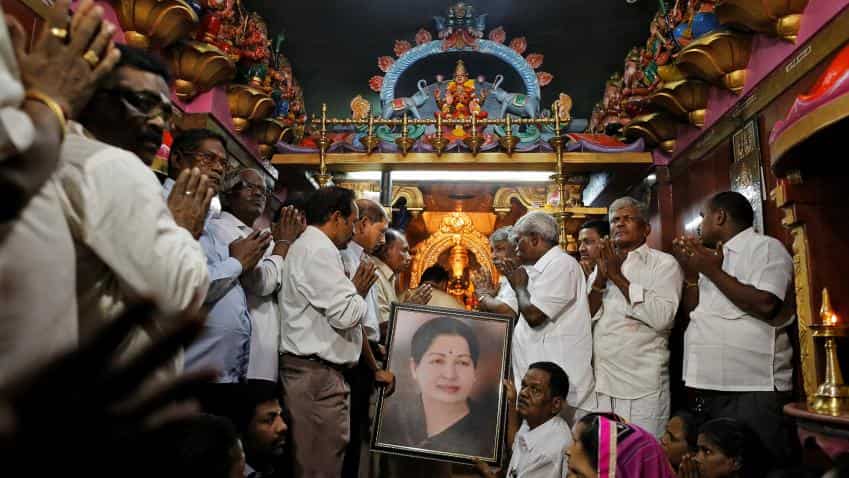 Well wishers of Tamil Nadu Chief Minister Jayalalithaa Jayaraman hold her portrait as they pray at a temple in Mumbai. Image Source: Reuters

Infosys Chennai, closed all operations today so as to observe one day of mourning.

Many other offices have also been reported to shut all ops on account of the former Chief Minister’s demise.

Government offices and educational institutions in Kerala said that they would continue to remain shut.

President of India, Pranab Mukherjee said, “I am extremely sad to learn about the sad demise of Ms. Jayaram Jayalalithaa, Chief Minister of Tamil Nadu.”

“Deeply saddened at the passing away of Selvi Jayalalithaa. Her demise has left a huge void in Indian politics,” PM Narendra Modi said.

It was close to midnight, at 11:30 pm, when Jayalalitha was declared dead at Apollo hospital after suffering a cardiac arrest earlier on in the day.

She had suffered and was doing poorly for nearly 74 days. The last rites will be performed on Tuesday at 4 pm.

Shortly after the announcement about Chief Minister J Jayalalithaa passing away, Finance Minister, O Panneerselvam was sworn in as CM by Governor, Ch Vidyasagar Rao at the Raj Bhavan.

"Flags will be flown at half mast; no ceremonial functions will be organised," Norohna added.