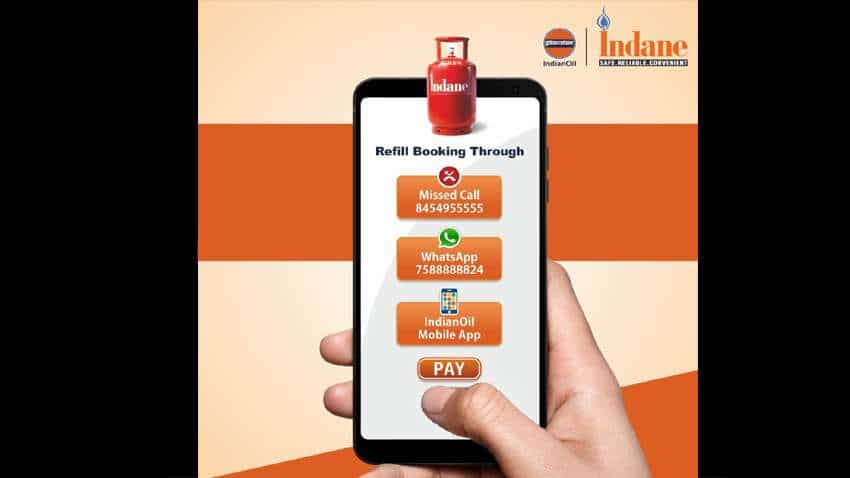 Booking refills via missed calls is a faster way to book with customers not having to hold calls for a long time. Pic from https://twitter.com/IndianOilcl/status/1344953676855734279/photo/1

Indane LPG gas cylinder refill booking: Now, booking a cooking gas LPG refill cylinder is just a missed call away for Indane Gas consumers. Indian Oil LPG customers anywhere in the country can use a single missed call number -- 8454955555 -- for refill booking. Booking refills via missed calls is a faster way to book with customers not having to hold calls for a long time.

Also, no call charges are levied to customers as compared to IVRS calls where normal call rates are applicable. This facility will be of immense help to people who are not adept with IVRS or old age customers as well as those in rural areas, the statement said.

He also rolled out the second phase of world-class premium grade petrol (Octane 100), branded as XP100 by Indian Oil, for high-end cars.

In this second phase, Indian Oil Corporation's branded XP100, which was last month launched in the national capital, was rolled out in seven more cities -- Chennai, Bengaluru, Hyderabad, Kolkata, Kochi, Indore and Bhubaneswar.

The missed call service for getting a new LPG connection was also launched in Bhubaneswar and will soon be extended to all over the country.

Speaking on the occasion, Pradhan exhorted the gas agencies and distributors to ensure that the LPG delivery period should be shortened from one day to a few hours. He further said the country has travelled a long way in LPG. The LPG connections given out in six decades prior to 2014 were about 13 crore and in the last six years, the same has been expanded to 30 crore.

On the occasion of new year, launched missed-call facility for Indane refill booking and for registering a new LPG connection through a single number 8454955555. This is a significant initiative by @IndianOilcl in providing convenience and ease-of-booking LPG to consumers. pic.twitter.com/8yNsfadwuR

Flagging off the dispatch of the first load of XP100 from the country's oldest operating refinery at Digboi, Assam, Pradhan said the fuel is of world-class quality which would enhance the efficiency of high-speed cars. This advanced petrol produced from the Digboi Refinery will cater to the needs of retail outlets in cities located in the country's north-east region. Digboi has joined the elite group of Mathura and Barauni refineries by producing XP-100 Petrol using existing infrastructure and secondary processing facilities.

Want to buy LPG cylinder? Don't have any address proof? Still, you can get Indane gas cylinder - here is how

LPG Connection: Get new Indane cylinder by giving a MISSED CALL on THIS number - Check PRICES and FULL DETAILS here

Indane LPG connection: Get this service at your doorsteps with just a MISSED CALL, WhatsApp message, SMS at these numbers; check cylinder prices in Delhi, Mumbai, Kolkata and Chennai