The authorities have warned dusty conditions are likely to prevail for another 3-4 days and advised people to avoid staying outdoors for long hours. Low visibility due to dusty weather conditions led to cancellations of all flights to and from Chandigarh International Airport. "No flight landed or took off from Chandigarh (airport) until today afternoon due to bad weather," a Chandigarh International Airport Limited official said. 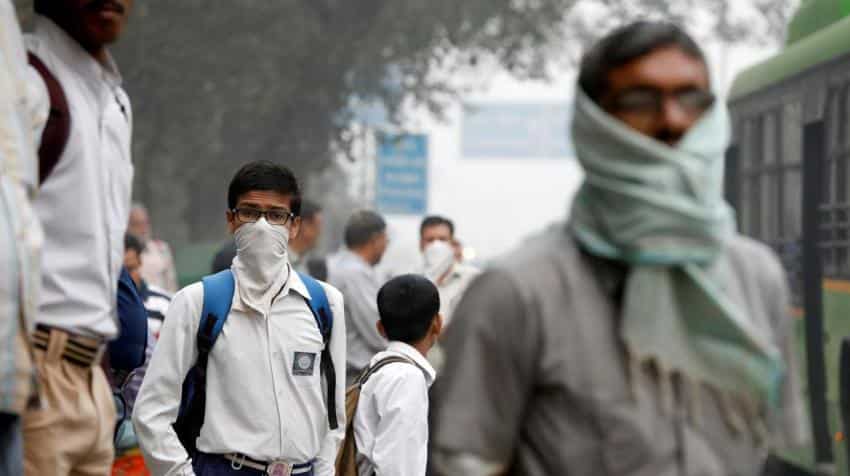 A cloud of dust hung over vast swathes of north Indian plains for the third day today, prompting authorities to suspend civil construction works in Delhi and Haryana as part of emergency measures to improve air quality, besides affecting flight services at Chandigarh airport. In Uttar Pradesh, dust storms have hit various parts, leaving 15 people dead and 28 injured, since yesterday. The air quality deteriorated because of dust storms in western India, particularly Rajasthan, which increased coarser particles in the air, the Central Pollution Control Board said.

The authorities have warned dusty conditions are likely to prevail for another 3-4 days and advised people to avoid staying outdoors for long hours. Low visibility due to dusty weather conditions led to cancellations of all flights to and from Chandigarh International Airport. "No flight landed or took off from Chandigarh (airport) until today afternoon due to bad weather," a Chandigarh International Airport Limited official said.

As the national capital region struggled with a "severe" dust pollution, Lieutenant Governor Anil Baijal ordered stoppage of all civil construction activities across Delhi till Sunday as part of emergency measures that also include intensifying mechanical road sweeping.

A thick blanket of haze has been enveloping Delhi and parts of the National Capital Region (NCR) for the past few days.

The air quality in Delhi remained at "severe" level for the third straight day. According to the L-G office, civic bodies, public works department and Delhi Pollution Control Committee (DPCC) have been directed to impose penalties on all road construction agencies for violating laid down norms for dust control measures.

The L-G tweeted that he held an emergency meeting in view of the "severe" dust pollution in Delhi with Environment Minister Imran Hussain and the officials concerned. He said emergency measures such as stoppage of all civil construction activities till June 17 have been taken.

In a statement, the L-G office stated that the municipal corporations, Delhi Development Authority (DDA) and sub-divisional magistrates would strictly enforce prohibition on open burning of garbage, plastics and leaves in the national capital. "Municipal Corporations and PWD will intensify mechanical road sweepings, sprinkling of non-potable water at central verges and roadsides and stop brooming activity on main roads," it stated.

Centre for Science and Environment (CSE) director general and EPCA member Sunita Narain said that "severe plus" category has been imposed for dust pollution under the Graded Response Action Plan (GRAP) with immediate effect till Sunday.

The EPCA's action plan, termed GRAP, has formulated five categories. These are severe plus or emergency, severe, very poor, moderate to poor and moderate.

The EPCA, a Supreme Court-appointed watchdog, had yesterday issued an advisory to chief secretaries of states in Delhi-NCR asking them to take "urgent steps" for controlling dust pollution.

Narain said, in pursuant to the advisory, a meeting was taken up by the chief secretary in Haryana late last night and they have also decided to shut down construction activities for that period with immediate effect.

The Haryana State Pollution Control Board (HSPCB) has issued advisory that no construction activities be carried out for the next two days in districts of Haryana falling under National Capital Region.

The HSPCB has also advised that no hot mix plants and stone crushers be operated for the next two days. "Delhi and NCR areas and other parts of Haryana have been experiencing a very severe air pollution due to dust storm with the PM 2.5 value crossing even 500g/m3 and considerably higher PM10 values," stated the HSPCB advisory.

A veil of dust spread over the plains of Uttarakhand for the second consecutive day today, reducing the harshness of the sun but adding to humidity levels.

The strong winds blowing from Rajasthan and Punjab have brought with them both dust and moisture affecting most of north India including Uttarakhand and western Uttar Pradesh, MeT office Director Vikram Singh said in Dehradun.