The cases of crop residue fire -- a major air pollutant in Delhi-NCR -- saw a 30 per cent rise in Punjab after the harvest season this year compared to last year. 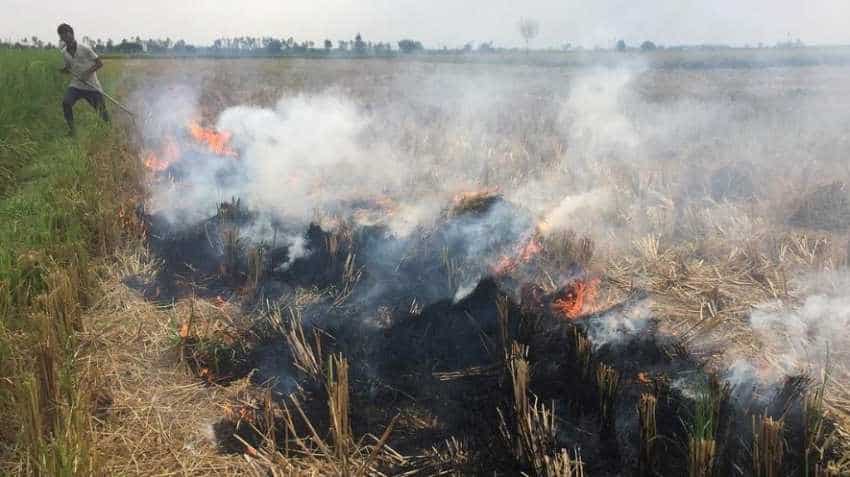 The cases of crop residue fire -- a major air pollutant in Delhi-NCR -- saw a 30 per cent rise in Punjab after the harvest season this year compared to last year. The substantial increase was recorded despite Chief Minister Amarinder Singh`s fervent appeals to the farmers not to go for the quicker option of getting rid of the crop residue by setting those afire.

He even invoked the holy celebrations of 550th birth anniversary of Sikhism founder Guru Nanak Dev, beginning November 9, saying he had advocated protecting natural resources. As per official records, over 19,860 cases of stubble burning have been reported in Punjab from October 15 till October 31.

The figure is 30 per cent higher than those reported during the corresponding period last year, officials said. Last year, Punjab saw 50,495 cases throughout the rice harvesting season that lasts till November 15.  Burning of crop residue, a common practice by Punjab and Haryana growers, leads to an estimated economic loss of over $30 billion annually, besides being a leading risk factor for acute respiratory infection, especially among children, a study at the International Food Policy Research Institute (IFPRI) and its partner institutes said this year.

"This time we are expecting that there will overall fall in cases of residue burning throughout the season," Secretary Agriculture K.S. Pannu told IANS. In neighbouring Haryana, 4,200 cases of stubble burning have been reported against 4,360 in 2018 till October 30. The districts of Karnal, Kurukshetra, Ambala, Yamunanagar, Fatehabad, Sirsa, Hisar, Jind, Palwal and Panipat, which have 13 lakh hectares under paddy cultivation, see high cases of residue burning.

About 50 per cent of the crop in the state has been harvested, an official told IANS. Smoke from the burning of agricultural crop residue by farmers in Haryana and Punjab contributes to Delhi`s poor air, increasing the risk of acute respiratory infection by three-fold for those living in districts with intense crop burning.

"Poor air quality is a recognized global public health epidemic, with levels of airborne particulate matter in Delhi spiking to 20 times the World Health Organization`s safety threshold during certain days," IFPRI Research Fellow and the study co-author Samuel Scott has said. The study, "Risk of acute respiratory infection from crop burning in India: Estimating disease burden and economic welfare from satellite and national health survey data for 250,000 persons", used NASA satellite data on fire activity to estimate the health impact of living in areas with intense crop burning by comparing them with areas not affected by crop residue burning.

The researchers observed that as crop burning increased in Haryana, respiratory health worsened. Farmers try to maximize their yields by planting the next crop as soon as possible after the previous crop has been harvested (generally wheat after rice). To quickly clear the field for the next crop, they burn the leftover stubble rather than using the traditional method of clearing it by hand.

A new analysis of the air quality life index (AQLI) by the Energy Policy Institute at the University of Chicago (EPIC) on October 31 showed the average citizen living in the Indo-Gangetic plain region can expect to lose about seven years of life expectancy. Particulate pollution is high in Bihar, Chandigarh, Delhi, Haryana, Punjab, Uttar Pradesh and West Bengal.

It showed a 72 per cent increase in pollution from 1998 to 2016 in the region that is home to about 40 per cent of India`s population. To ensure zero crop-residue burning, the Confederation of Indian Industry (CII) has adopted 100,000 acres of farmland in nearly 100 villages in Ludhiana, Barnala and Patiala districts of Punjab and Rohtak, Sirsa and Fatehabad districts of Haryana. It is proactively engaging with over 15,000 farmers to provide farm machinery, organise technical training programmes as well as massive awareness drives in these villages of Punjab and Haryana, a CII statement said.

Equipment has been installed to monitor village-level air pollution data as well as to measure the impact of reduced stubble burning. The Punjab government has already warned many a time the farmers against stubble burning and said those cultivating panchayat lands would be barred from taking it on lease if found indulging in crop residue burning. Nearly 1.37 lakh acres of panchayat land is under agriculture. The state has also ordered impounding of combine harvesters functioning without a super straw management system.

Even the Shiromani Gurdwara Parbandhak Committee (SGPC), considered a mini Parliament of Sikh religious affairs, has asked the farmers not to burn crop residue in the fields. It said the preservation of clean and green environment is of foremost significance in view of Guru Nanak Dev celebrations. The SGPC has instructed all the managers of Sikh shrines that they should ensure strict compliance of directions against stubble burning on the agriculture lands owned by the gurdwaras.

On its part, the Punjab government last year supplied 28,609 agro-machines to the farmers last year for zero stubble burning on subsidy ranging from 50 to 80 per cent. This fiscal the government aims to provide 26,000 machines for in-situ management of paddy straw. The area under paddy cultivation in Punjab 30 lakh hectares, a marginal decline from last year`s 31.03 lakh hectares.