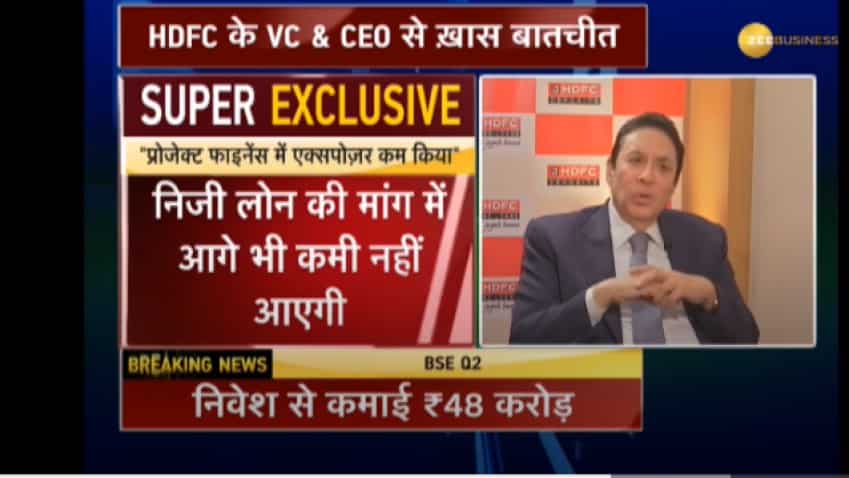 Housing is a sector with a structural demand and there are a variety of reasons for this demand: Keki Mistry. Image source: Zee Business

Q: HDFC has posted good results in Q2 as the profit after taxes has gone up by almost 25 per cent and Net Interest Income has grown by 18 per cent. What are the growth drivers?
A: Housing is a sector with a structural demand and there are a variety of reasons for this demand. The first reason is related to the affordability of housing in India and you can compare it with the affordability levels that used to be 10-20 years ago. The main reason for that is that over the period of time income levels has gone up faster than property prices, which has made housing more affordable.
Secondly, penetration level of housing is very low in India as the mortgage to GDP ratio stands just at 10 per cent, while the same in the US, UK and China stands at 63 per cent, 68 per cent and 22 per cent respectively.

The third reason is associated with government's focus towards housing as it has provided different types of incentives in the sector like fiscal benefits and subsidy scheme. In an expectation that giving a boost to the housing sector effectively will give a boost to the only core sectors in the economy like paint, cement, steel and power among others.

Last but not least the most important thing in my view is the age of the borrower, also known as demography. In India two-thirds of the population is below 35 years of age and an average age of a first-time buyer in India is about 38-39years. This means that two-thirds of the population has not even thought of buying a house but over the next 3, 5, 10, 20 years, the youths will grow to an age where they will have to think of buying a house.

Q: I would like to know about the loan growth and composition of the loan book at present? Also, let us know about concerns related to corporate loan?
A: Corporate loans have gone down. If you will have a look on the breakup of September 30th then you will find that 73 per cent of our loans were disbursed to individuals, 12 per cent loans are for construction finance. The loans to individuals and construction finance stood at 72 per cent and 13 per cent in June quarter respectively. Corporate loans stand at 6 per cent and the remaining 9 per cent is with lease rental discounting notes.

Q: Have you developed a strategic focus on individuals?
A: Loans to individuals have gone up in past six months, there has been an incremental growth of 81 per cent. That is a part of the strategy and the fact is that structural demand of housing has gone up and is the biggest area of growth. In addition, we have slowed down on developers and corporates.

Q: What is the outlook?
A: We have an outlook to grow in each of these segments. If you go to see on the historical data of the last 3-5 years then you will find that individual businesses never went down than 70 per cent.

Q: Talks are there that there is a lack of liquidity in the market. During communication with corporates, we find that there is a problem related to liquidity. Is there concern is a genuine one and there is a liquidity crunch in the market?
A: We have heard that NBFCs will face a liquidity crunch. However, funds are available for strong companies. There is a flight to quality. Deposits are growing very well for us and we are also raising money through a variety of sources. We raise money through external commercial borrowings. Masala bonds, deposits and debentures and bonds among others.

Q: Can you elaborate the provisioning of HDFC as you have segregated more than Rs 2000 crore for the purpose?
A:  We are extremely conservative for our provisioning policy and we have always provided more than what the regulation requires. As of September 30, 2018, we carry a provision which is 2120 crore higher compared to what is required by the regulation. Historically, we have been very conservative.

Q: Do you have any direct exposure to IL&FS?
A: You can't say it as directly to IL&FS but we have a loan of around Rs 390 crore to IL&FS and that is against rental discounting. We directly get the rentals from their property in BKC that comes largely through the third party tenants. The rentals come as a repayment of the loans.

Q: There is a concern related to NBFCs and housing finance companies, which has pulled down their valuations all of a sudden. But HDFC is a company which is strong, stable and not a part of this. Can you talk about the reasons that gave birth to this concern?
A: The default at IL&FS turned up to be the reason for this concern, which gave birth to risk awareness in the market. This risk awareness has got intensified over the last one month due to prevalent rumours in the market. Undoubtedly, 99 per cent of these rumours are just a fake one but the market is carried out with these rumours and start selling the stakes. The biggest reason behind the problem of liquidity is the nervousness of people.  Besides, there is a fair amount of commercial papers with NBFC, which were borrowed from the mutual funds, and that is coming from the maturity in the next one to four weeks. Timely repayment on maturity will help the market to regain its confidence. I feel, this is a short-lived concern and will continue to be in process for next 2-4weeks. The confidence will return back as soon as people will find that the NBFCs are able to honour their commitments.

Q: New retailers and investors are quite depressed?
A: See, you will have to face ups and downs while investing in the stock markets. For that purpose, you, the retail investors, should have patience and appetite to observe it and the most important thing is that you need to hold it out and stay put.

Q: Would you like to comment on the ongoing conflict between the RBI and the government?
A: I can't comment on it on the basis of press reports but as HDFC we are getting liquidity.

Q: RBI has advised Banks to reduce their exposure in NBFCs and housing retail companies.
A: We never heard such a thing. In fact, the State Bank of India has said that we will buy a large quantity. In addition, we have seen that one of the housing finance company has received a large loan from two banks, a private and the other is a public one. The information is based on public information.

Q: I would like to know about your rural and urban spread?
A: See, a large part of our lending comes out in the outskirts of big cities. If you have a look at our average loan then you will get that the average loan is Rs 26 lakhs and it is spread in the distant outskirts of cities and in tier-2 and tier-3 towns.

Q: Indiabulls Housing Finance has increased its lending rates. Do you think that it is the right time to increase the rates and we can see a change in your rates in time to come?
A: In our case, we are not going to change our lending rates. But, we are proactive and have responded to the increase in the cost of earnings at HDFC by increasing lending rates. Our spread is stable and it remains the same as it was in June 2018, .i.e. at 2.28 per cent.

Q: What is your outlook on NPAs?
A: It is difficult to say but we will have to wait and see how it progresses.

Q: What are your expectations, in terms of growth, in this financial year?
A: We don't make advance projections on what and how the growth will be but there is nothing today that will make us believe that it is going to hamper the growth that we have achieved in past 5-10 years.