The giant show will be held from February 20 to 24 at Yelahanka Air Force Station in Bengaluru. The tagline for the show is ‘Runway to a billion opportunities’. 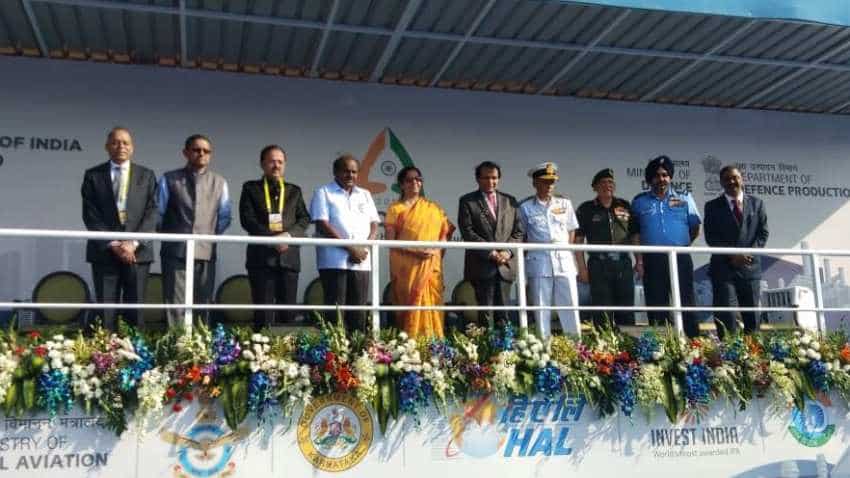 Aero India, organized by the Indian Ministry of Defense and fully supported by the Government of India is the largest airshow in Asia. (Aero India Twitter page)

The 12th edition of the Aero India 2019 started on Wednesday morning. The event was inaugurated by Defence minister Nirmala Sitharaman in Bengaluru. She said that India offers a big market for Defence manufacturing and invited investors to capitalise on aero space and other sectors which can help manufacturing in India. The giant show will be held from February 20 to 24 at Yelahanka Air Force Station in Bengaluru. The tagline for the show is ‘Runway to a billion opportunities’. More than 200 Indian and 130 International companies have registered to display their products and do trade business in the largest defence industry in the world.

First three days are reserved for business activities, while the show will remain open for public on the last two days. Ministry of Defence (MOD) has launched a unique mobile application which will provide with detailed information to visitors, local public, exhibitors, media and officials. Visitors who are interested to get a exposure of the show on the last two days, can book their tickets with the help of the application.

Here are the 10 facts of this Aero India edition:

1. The 12th edition of the international aerospace and defence exhibition will feature a total of 61 aircraft and 373 exhibitors.

2. The five-day long biennial event, which will showcase India's air defence prowess, will also act as a platform for aviation companies, the defence sector and government to forge new alliances and contracts.

4. It is expected that in addition of 1200 Indian and foreign journalists would visit the venue.

5. In Aero India, close to 500 companies, both Indian and foreign, are expected to participate.

6. BrahMos Aerospace plans to display a model of the indigenous Light Combat Aircraft (LCA) Tejas with two next-generation BrahMos missiles under its wings.

7. Aero India 2019 was marked by controversy with reports about it being shifted to Uttar Pradesh, which had taken a political colour, as the Congress-JD(S) led government in the state had hit out at the BJP-led Centre against the alleged move.

8. India is the world’s second largest importer and as one of country's top suppliers to India’s armed forces, the U.S. has shipped billions of dollars’ worth of aerospace and defense orders in the last few years alone.

9. Aero India, organized by the Indian Ministry of Defense and fully supported by the Government of India is the largest airshow in Asia.

10. Homegrown Saras multi-role passenger plane and Rafale, the fighter the IAF will take delivery of, will demonstrate its prowess at the Aero India show.