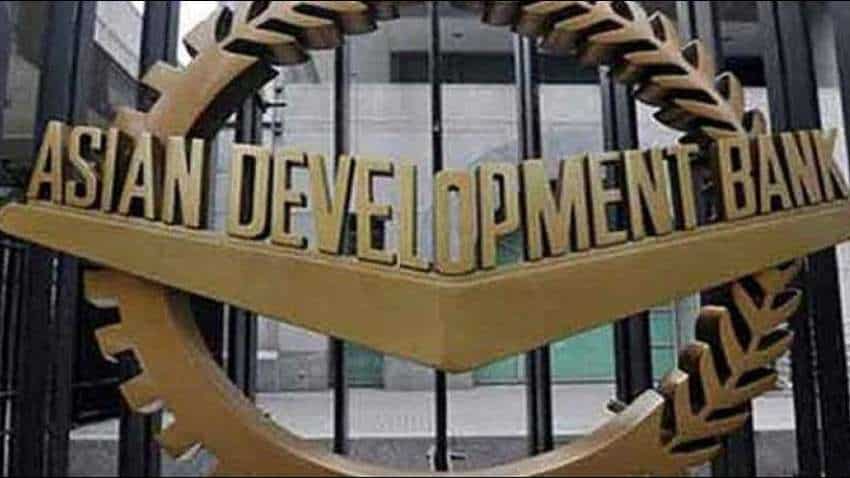 The Reserve Bank of India (RBI) also trimmed India's economic growth projection by a similar margin to 9.5 per cent in June this year.
Written By: PTI
RELATED NEWS

The Asian Development Bank (ADB) has lowered India's growth projections for the current financial year by a percentage point to 10 per cent, mainly due to disruptions in economic activity caused by the second wave of the COVID-19 pandemic.

In its update of the Asian Development Outlook (ADO) released on Wednesday, the multilateral lending agency has also trimmed the growth forecast for Asia as a region from 7.3 per cent to 7.1 per cent for 2021, though it retained the growth projections for China at 8.1 per cent.

"The growth forecast for India in fiscal year 2021 (ending March 2022) is revised down, as May's spike in COVID-19 dented the recovery. The outbreak, however, dissipated faster than anticipated, resulting in several states easing lockdown measures and returning to more normal travel patterns," said the ADO Update (ADOU) 2021.

The economy is expected to rebound strongly in the remaining three-quarters of FY2021, and grow by 10 per cent in the full fiscal year, before moderating to 7.5 per cent in FY2022 (fiscal ending March 2023), ADB said.

The Reserve Bank of India (RBI) also trimmed India's economic growth projection by a similar margin to 9.5 per cent in June this year.

Because consumption will recover only gradually, the government spending and exports will contribute more to FY2021 than they did in the previous fiscal, it said.

"The Indian economy is showing encouraging signs of recovery as the effects of the second wave dissipate. The government's vaccination drive, its new fiscal stimulus package, and initiatives to free more resources for infrastructure development, along with measures to strengthen health-related interventions, are helping speed up recovery," Takeo Konishi, ADB Country Director for India, said.

"The subregion is projected to expand more slowly this year than earlier projected, but faster next year. While India's drives the forecast, growth rates will vary across economies. As well as for India, this Update revises down 2021's forecasts for Bangladesh and Nepal, both grappling with another resurgence in COVID-19 cases."

However, China will remain strong, despite a protracted recovery in household consumption. "The GDP growth forecast remains unchanged at 8.1 per cent in 2021, and 5.5 per cent in 2022, as a solid export performance and higher fiscal support in the second half of 2021 keep growth on track," as per ADB's estimate about China.

Even as COVID-19 cases increase in China, the gradual recovery in consumption is expected to continue, buttressed by improvements in the job market and consumer confidence.

The contributions of net exports and investment to China's growth, supported by healthy trade dynamics, are also expected to increase this year, before moderating in 2022, it said further.

ADB said the pandemic is clouding developing Asia's economic prospects despite a rebound in exports demand and revival in global demand.

"Renewed COVID-19 outbreaks since July are slowing the growth momentum in some parts of the region. The recovery has been weaker in economies hit by domestic outbreaks and those facing weak demand for their key industries such as tourism-dependent economies," ADB said.
Developing Asia comprises 46 members of ADB.

The rebound in Developing Asia is expected to be a bit weaker than ADO 2021's forecast. Regional GDP is expected to expand by 7.1 per cent this year, a marginal downward revision from the earlier projection of 7.3 per cent, it said.

"Regional growth this year will be characterized by slower-than-expected expansions in South Asia and Southeast Asia, a slight contraction in the Pacific and faster recoveries in East Asia and Central Asia."

"Rapid vaccine rollouts in these economies have reduced the incidence of severe cases, hospitalizations, and deaths during the resurgence of COVID-19 infections," as per the update.

Growth in the US, Euro area, and Japan will remain robust in 2022 with GDP likely to grow by 3.9 per cent on an average.

On the price front, ADB said inflation has moved up in some economies in Asia due to rising energy and food prices as well as exchange rate depreciation.

"But it nevertheless remains close to the targets of central banks across the region, excluding Central Asia. Against this backdrop, fiscal and monetary policies continue to be accommodative and financial conditions remain robust," the ADOU 2021 said.

India's Reserve Bank has projected retail inflation at 5.7 per cent in the current fiscal year on account of supply-side impediments, firm crude oil prices and higher cost of raw materials. RBI takes into account retail inflation as a key input to decide its monetary policy every two months.