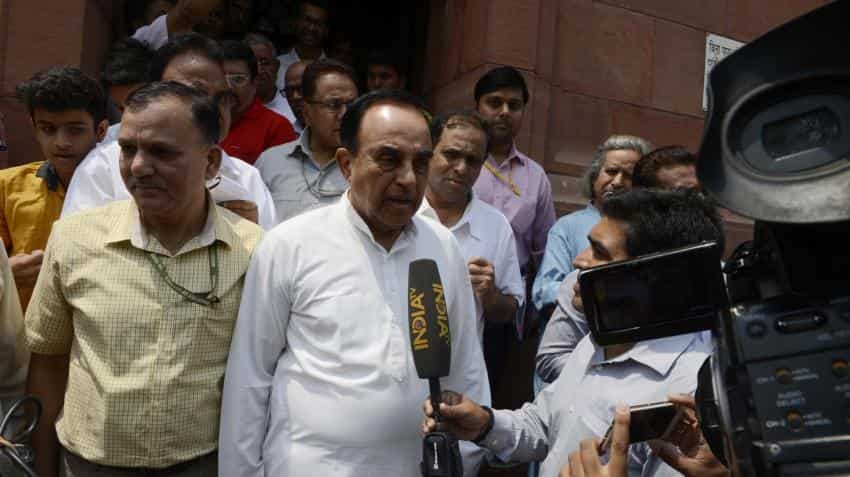 Govt needs to speed up implementation of reforms to push economic growth: Survey

India's economy will grow by 8% in FY17: Industry

Finance Minister Arun Jaitley did not use this method because he, being a lawyer, was "sensitive" to the rights of those who have kept black money abroad, Swamy said at an event.

While Prime Minister Narendra Modi exhorted the tax authorities to double the tax base to 10 crore earlier in the day, Swamy said the national savings rate has dipped to 33% and needs to be pushed up to at least 40%.

Increase in the savings rate will provide resources for growth and the Rs 2 trillion which will have to be foregone (if the income tax is abolished) will get more than compensated, Swamy said, stressing that the country needs to push the growth up to 10% per annum for at least a decade for eradicating poverty and unemployment.

The leader claimed that Rs 120 trillion or 60 times the revenues from tax collection is stashed in tax havens abroad which needs to be brought back.

Citing his conversation with Modi, he said the Prime Minister has "preferred" adoption of a UN-approved method of recovering the black money by nationalisation of such funds.

"If any country passes a law...That the citizens of their country holding accounts in the banks of these 70 countries (practising secret banking), their bank account is hereby nationalised," he said.

Stating that countries like Egypt, the Philippines and Libya have used this method, Swamy said Modi has asked him to prepare a note on the same.

"I am hoping that the note that I will be giving to the PM in a few days will translate itself into a law, into a legislation and then we can hope we will get all these countries to give the money," he said.

"Why didn't we do this all this while? Because Jaitley is a lawyer and he was little sensitive to the rights of those who have accounts there. But now the PM says this is an important issue and we have to do something about it," he said.

Saying that there is nothing personal in his opposition to Raghuram Rajan, Swamy, however, continued to make case for the Reserve Bank of India (RBI) Governor's ouster.

"Reasonable rate of interest can be only possible if we ask Rajan to go back to Chicago...It is basically his philosophy that the way to control inflation is to have high interest rates," he said.

Rajan was like a doctor who says that the only way to bring down patient's temperature is to kill him, he said, talking about impact of RBI's anti-inflation stance on the economy.

Printing money is not always inflationary and if the excess money gets channelised into infrastructure it can push up the growth, the Rajya Sabha MP said.

Swamy also called for scrapping of the forward markets in agricultural commodities, alleging that they had killed the agriculture.

Govt needs to speed up implementation of reforms to push economic growth: Survey

India's economy will grow by 8% in FY17: Industry