$550 billion of exports! India could potentially be one of the big winners from US-China trade war - Here is how

This survey insights land at the same time when US Commerce Secretary Wilbur Ross is saying in New Delhi that India has a "wonderful opportunity right now, to take advantage of trade dissension elsewhere". 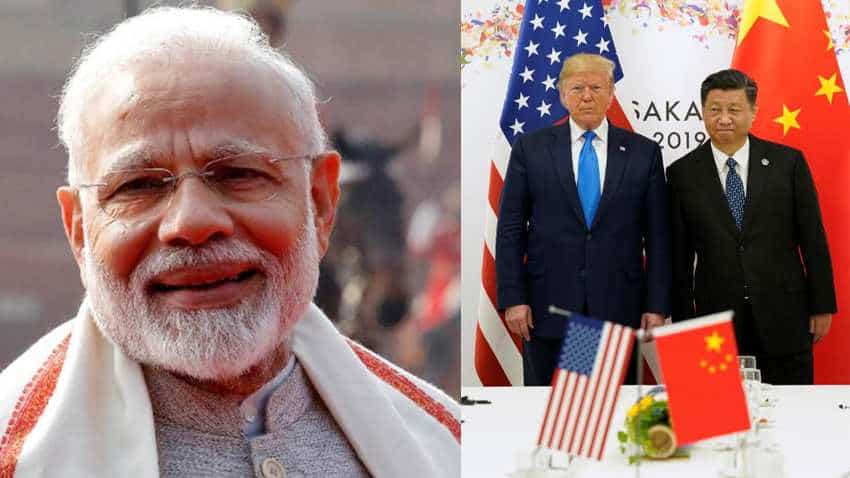 According to a Credit Suisse survey of 100 companies with global sales of $1 trillion that projects $350-550 billion of exports will shift out of China and that this is "inevitable even if slow", India could potentially be one of the big winners from the US-China trade war, as per an IANS report. This survey insights land at the same time when US Commerce Secretary Wilbur Ross is saying in New Delhi that India has a "wonderful opportunity right now, to take advantage of trade dissension elsewhere".

"We've actually prepared a chart about what are the areas where China is the big exporter to us? How does that compare with what India is exporting to us? And what are possible solutions to how do we change that mixture?" Ross said at the India Today 'India Economic Summit' event in New Delhi on Thursday.

The Credit Suisse report, reviewed by IANS, has said that firms in China plan to move production to Vietnam, India, Taiwan and Mexico.

Ross' comments and the Credit Suisse report both come as China's top trade negotiator prepares to lead an upcoming 13th round of talks aimed at resolving the ongoing trade war with the US.

Chinese Vice Premier Liu He will travel to Washington for the negotiations and trade talks would take place after China's National Day holiday which falls on October 7.

Multiple pressures to move manufacturing out of China are likely to peak now because "80 per cent of the finished goods sold to consumers come under tariffs only now". The report connects the dots to similar goods in earlier lists which saw price rise, lower demand and a shift in production.

Companies keen to move out

Companies that have spoken to Credit Suisse have said "they would shift manufacturing out of China even without tariffs". They list a "shrinking Chinese workforce" as one of the main issues: "50 million fewer workers by 2030". Firms plan to move production to Vietnam, India, Taiwan and Mexico, says the report.

"In five years though, with the Chinese manufacturing workforce shrinking by another 9-15 million after a 20 million decline since 2015, we expect $350-550 billion of exports to move out of China. It could be more, if other countries improve absorption capacity: Vietnam is too small (but should gain the most), Bangladesh a pure-play on apparel, and India has seen good import substitution in electronics but is struggling to grow apparel exports. Hon Hai and Pegatron would be negatively affected, L&T, Havells and Feng Tay would benefit. In the near- term, tariffs would raise prices in the US (13 per cent of firms absorbing them), and shift Chinese exports to other countries (possibly at lower prices)."

US President Donald Trump's administration first imposed tariffs on Chinese imports in 2018 in a bid to win concessions from China, which responded with tit-for-tat tariffs. A deal remains elusive as the dispute escalates between the world's two largest economies.

In New Delhi, Ross spoke about the "third kind of barrier" that "bothers" the US, which he said was neither about competitive advantage nor one country actually needing a certain product because of locational constraints. "If you look at our trade deficit it has two components, one's called automotive and the other's called China," he said.

During his comments, Ross made the distinction between "small trade deficits with other countries" and "China" as two separate issues. "We believe that most of the things we're requesting particularly of India would not only help us vis a vis India, we think a lot of them would help India itself," he added.

"So, (I) don't want you to think that we're just focusing on deficit, we're focusing also on total trade. And what the world needs is more total trade. This recent diminution in the forecast, that world trade will be down to 1.2 per cent this year, is a very bad omen for the world because normally, trade, global trade has been growing at a percentage point or so. So if it's really true, that world trade will only grow at around 1 per cent. That does not speak very well for the world GDP. So that's a source of separate concern," Ross said.