50 days of Modi Government: Prime Minister Narendra Modi-led Union government has completed 50 days in office since coming to power for the second time after a historic win in this year's Lok Sabha elections. 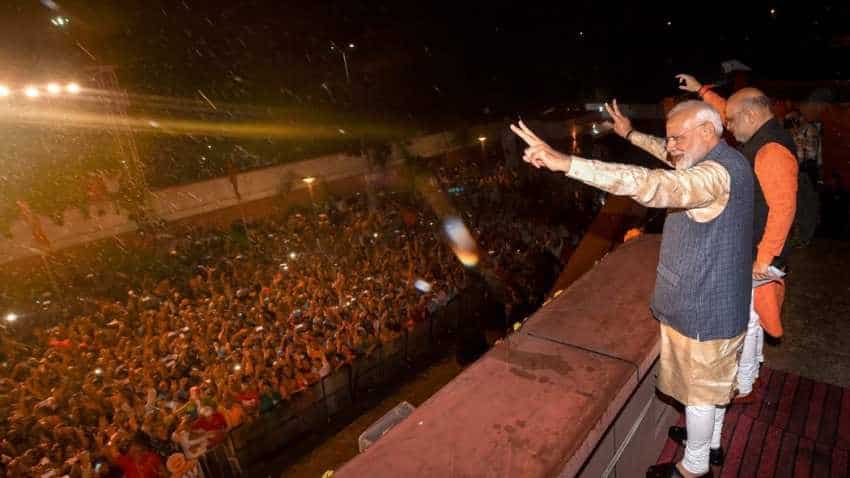 50 days of Modi Government: Prime Minister Narendra Modi-led Union government has completed 50 days in office since coming to power for the second time after a historic win in this year's Lok Sabha elections. PM Modi's Bharatiya Janata Party (BJP) won 303 seats in the 543-member Parliament and 353 seats along with NDA allies. In the first 50 days, Modi government has made several big-ticket announcements for farmers, infrastructure, traders, workers, startups and more.

PM Modi has set his second term in motion with an ambitious goal of making India a $5 trillion economy by 2024. The government hit the ground running from day one itself, touching every aspect of India’s national life  - From domestic development to international relations, from farmers to start-ups, from traders to industry.

Here's a look at the highlights of the first 50 days of the second term of Modi government:

- Pension schemes for farmers, small traders and unorganized workers, an extension of PM-KISAN to all farmers and setting up of a Jal Shakti ministry have been fulfilled already.

- Removal of tainted bureaucrats across many departments has happened. A cleanup of J&K Bank, the key to security in the state, started in the first 50 days.

- The Budget 2019 laid a roadmap for a five trillion dollar economy as well as for doubling farmer income. It talked of electric vehicles, of the mission of taking electricity and cooking gas to every home. It also talked of ending angel tax and of starting a faceless, seamless tax assessment interface.

- Labour reforms, enacting strong laws against frauds who dupe the poor, death penalty for child sexual assault, higher MSP for Kharif crops were among the pro-people decisions taken by the government in the last fifty days.

- PM Modi invited BIMSTEC leaders for his swearing-in. PM Modi was one of the most sought-after leaders for pull-aside meetings in the recent G-20 Summit. He visited Sri Lanka and Maldives and showed his strong belief in Neighbourhood First policy. He strongly articulated India’s position against terror at the SCO Summit and also led the world in celebrating International Yoga Day.

- Space mission: Gaganyaan - First human space flight by India by the 75th anniversary of Independence in 2022;  Chandrayaan-2 to help trace back the origin and evolution of the moon and studies to address the origin of water on moon will be launched tomorrow. Solar mission Aditya L1 is scheduled for launch in 2020 to study Sun’s Corona and its impact on climatic changes. Mission to Venus - tentative launch expected in 2023, to study the atmosphere and surface topography of Venus.