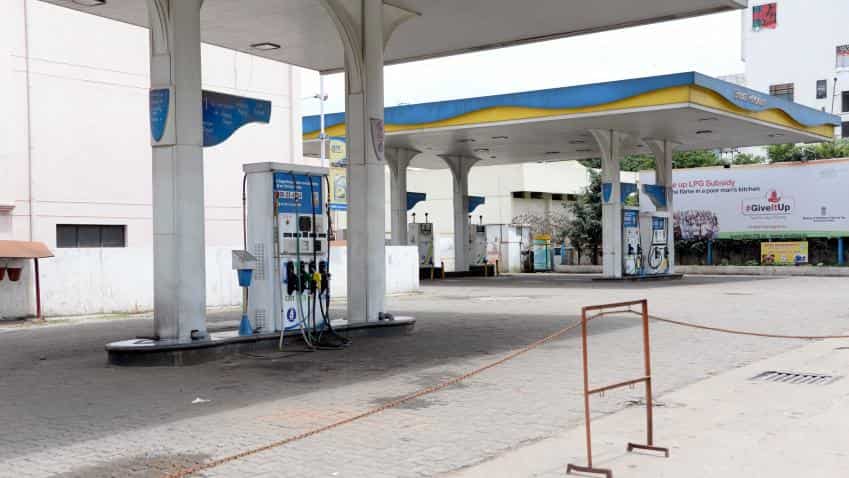 All over India, there around nearly 55,000 petrol bunks with a majority operational between 6 a.m.-10 p.m. Photo: IANS
Written By: IANS
RELATED NEWS

Around 4,500 petrol and CNG pumps in Maharashtra have decided to observe `holiday` on Sundays, beginning May 14, and work on single day shifts, 9 a.m.-6 p.m., from Monday - ignoring criticism of the move by the Petroleum Ministry.

The move is being implemented to support its various demands with the Oil Marketing Companies (OMCs), including a hike in dealer margins which were not revised since 2011, and other long-pending issues.

"We are currently operating on extremely low margins, selling high-tech unleaded petrol/diesel products in which the evaporation rate is very high, resulting in huge losses, besides several other major issues," Lodh told IANS.

Additionally, there are areas of concern like a certain amount of minimum salary to be paid to the staffers at each petrol pump, which has become unaffordable due to the low operating margins, he added.

The FAMPEDA decision will directly affect the livelihood of around 100,000 staffers at petrol pumps in the state who work mostly in two or three shifts depending on the location.

A weekly holiday plus working in a single shift on other days will help the petrol pumps to drastically reduce their running expenditure, he pointed out.

A beginning was made on Wednesday with petrol pumps refusing to buy fresh stocks from OMCs, with nearly 85 percent response by the dealers.

However, there are apprehensions that a weekly holiday coupled with single-shift operations could lead to long queues at all times of the day at petrol pumps in major cities like Mumbai, Pune, Nagpur, Nashik, Aurangabad, etc.

Besides Maharashtra, the other states where petrol pumps are also planning to implement a similar working schedule include Karnataka, Kerala, Tamil Nadu, Puducherry, Andhra Pradesh, Telangana and Haryana which had announced a similar move on April 18.

Though Lodh declined to speculate the daily figure of losses in view of the new work schedules, he said the monthly sale of petroleum products is in the range of 130 kl per month in India.

All over India, there around nearly 55,000 petrol bunks with a majority operational between 6 a.m.-10 p.m., and the rest working round-the-clock.

Additionally, Lodh said the need to pay a certain minimum salary to the staffers at petrol pumps "has become unaffordable due to the low operating margins", he said.

Earlier, some dealers had attributed the move towards saving fuel and Forex for the country, in response to an appeal by Prime Minister Narendra Modi.

The Sunday-holiday move could entail savings of around 20 per cent fuel burned in the country, they said.

On April 20, the Petroleum Ministry said it "neither endorses nor approves" of the move by small section of dealers to keep their petrol pumps closed on Sundays. It said the move would lead to inconvenience to general public.

The ministry criticism came after the Consortium of Indian Petroleum Dealers (CIPD), which claims to have 25,000 members, asked its members to shut shop on Sundays.