Authorities have seized 33 fuel stations in Telangana and Andhra Pradesh with the busting of an inter-state gang cheating the consumers by using electronic chips to manipulate discharge of fuel. 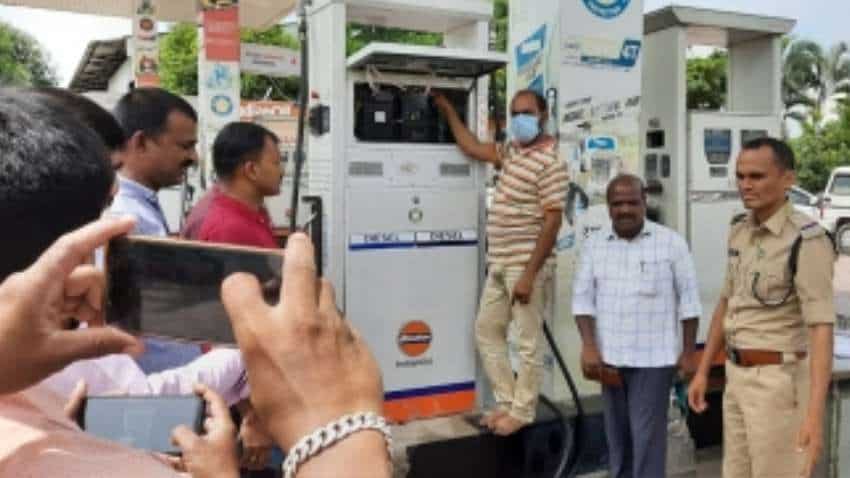 Cyberabad and Nandigama police nabbed one Subhani Basha and recovered about e14 ICs, 8 displays, 3 GBR cables, one motherboard and one Hyundai i20 car. IANS pic

Authorities have seized 33 fuel stations in Telangana and Andhra Pradesh with the busting of an inter-state gang cheating the consumers by using electronic chips to manipulate discharge of fuel.

The police and the legal metrology department of both the Telugu states conducted joint raids and apprehend the gang, which was installing integrated chips in filling machines at fuel stations to dispense less fuel than the actual display on the filling machine board.

The police said for every 1,000 ml of petrol or diesel, these fuel stations were dispensing 970 ml.

Cyberabad Police Commissioner V.C. Sajjanar announced the arrest of the gang on Saturday. He said that integrated chips (ICs) programmed with manipulated software were installed with the connivance of fuel station owners, causing loss of crores of rupees to the consumers.

Cyberabad and Nandigama police nabbed one Subhani Basha and recovered about e14 ICs, 8 displays, 3 GBR cables, one motherboard and one Hyundai i20 car.

The main accused Basha, Babji Baba, Madasuguri Shankar and I. Malleshwar Rao all hail from Eluru town of Andhra Pradesh.

The police also arrested nine owners of various fuel stations in both the states. Five other owners were absconding. Joseph and Shibu Thomas, two electronic chip/instruments suppliers from Mumbai, are also absconding.

According to the police, Basha learnt work of fuel station pump mechanism and became an expert in that field. The accused used to purchase the chips and manipulated software from Joseph and Shibu Thomas in Mumbai, programme the chips and install them in different fuel stations at the rate of Rs 80,000 to Rs 1,20,000 per programmed chip installation.

The accused used to install the ICs only in one fuel pump out of two. For filling fuel in vehicles, manipulated pumps were used and to fill in plastic bottles and cans, regular pumps were used which did not have manipulated chips, so that the public did not know about the fraud.

"To prevent such large scale cheating and irregularities, these corporations have been alerted to be more vigilant in the future. This cheating can't be detected by each and every consumer. The vigilance teams which visit fuel stations regularly have to check for such chips," he said.