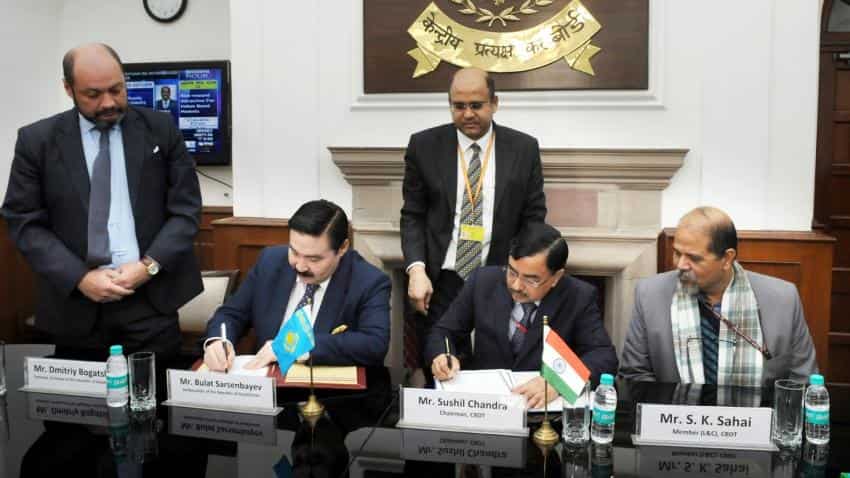 CBDT Chairman Sushil Chandra and the Ambassador of the Republic of Kazakhstan to India Bulat Sarsenbayev sign a Protocol to amend the existing Double Taxation Avoidance Convention (DTAC) between India and Kazakhstan. Image Source: IANS
Written By: PTI
RELATED NEWS

There was a 300 per cent jump in the number of applications for PAN (Permanent Account Number) post demonetisation, the CBDT said today.

Central Board of Direct Taxes (CBDT) Chairman Sushil Chandra said while there were around 2.5 lakh PAN applications per month earlier, after the Centre announced to scrap high value currency notes in November last year, the number rose to 7.5 lakh.

He added that the department was taking a number of measures to curb black money and that steps such as no cash transaction of above Rs 2 lakh was a move in that direction.

"All these measures and demonetisation will act as solutions to curb the use and generation of black money in the country.

"More and more people applying for PAN means they want to keep their businesses and financial transactions clean," the CBDT chief said.

PAN is a 10-digit alphanumeric number, which is alloted by the Income Tax (IT) department to an individual, firm or entity. About 33 crore PAN cards have been issued in the country till now.

The CBDT is the policy-making body of the I-T department.