Khanderi, the second Scorpene class submarine that has superior stealth and the ability to launch a crippling attack with torpedoes as well as tube-launched anti-ship missiles whilst underwater or on surface, was today launched at the Mazagon Dock Shipbuilders Limited (MDL) here. 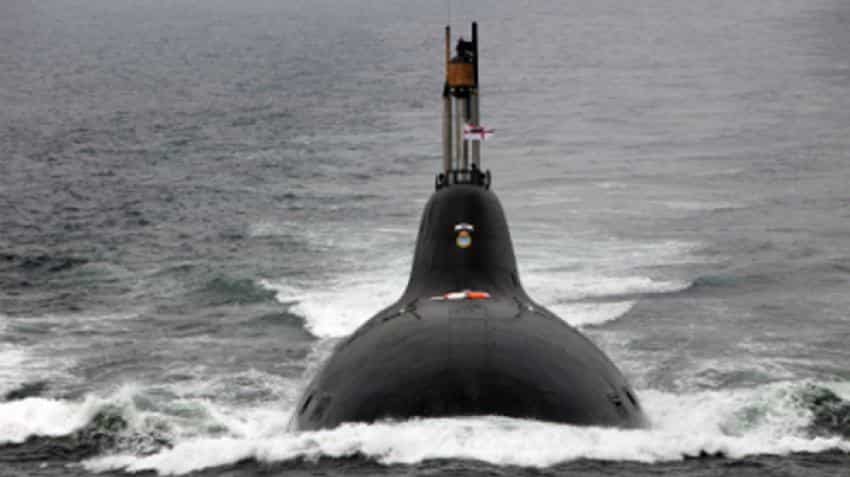 Khanderi, the second Scorpene class submarine that has superior stealth and the ability to launch a crippling attack with torpedoes as well as tube-launched anti-ship missiles whilst underwater or on surface, was today launched at the Mazagon Dock Shipbuilders Limited (MDL) here.

Union Minister of State for Defence Subhash Bhamre presided over the function to initiate the launch of Khanderi (Yard 11876). The submarine was launched by the Union minister's wife, Bina Bhamre.

Chief of the Naval Staff, Admiral Sunil Lanba was also present on the occasion when the submarine was separated from the pontoon on which it was assembled.

The state-of-the-art features of this Scorpene class submarine include superior stealth and the ability to launch a crippling attack on the enemy using precision guided weapon.

The attack can be launched with torpedoes, as well as tube-launched anti-ship missiles, whilst underwater or on surface.The stealth features will give it an invulnerability, unmatched by many submarines.

The submarine is designed to operate in all theatres, including the tropics. All means and communications are provided to ensure interoperability with other components of a Naval task force.

Khanderi is the second of the six submarines being built at MDL in collaboration with M/s DCNS of France, as part of Project 75 of Indian Navy. The first one, Kalvari, is completing sea trials and will be commissioned shortly into the Indian Navy, a defence official said.

The Indian Navy's submarine arm will complete 50 years on December 8 this year.

The Submarine Day is celebrated every year to commemorate the birth of the submarine arm with induction of the first submarine, erstwhile INS Kalvari, into the Indian Navy on December 8, 1967, it said.

India joined the exclusive group of submarine constructing nations on February 7, 1992, with the commissioning of the first Indian-built submarine, INS Shalki.

The MDL built this submarine and went on to commission another submarine, INS Shankul, on May 28, 1994. These submarines are still in service today.

Khanderi is named after the Island fort of Maratha forces, which played a vital role in ensuring their supremacy at sea in the late 17th century. Khanderi is also the name for Tiger Shark, an MDL official said.

The submarine is built according to the principle of modular construction, which involves dividing the submarine into a number of sections and outfitting them concurrently.

The equipment is mounted in a special manner and then embarked into the sections. The complexity of the task increases exponentially as it involves laying kilometres of cabling and piping in extremely congested compartments.

All equipment has been installed in the submarine, with 95 per cent cabling and piping also being completed.

Pressure testing, setting-to-work and commissioning of various systems of the submarine is presently in progress, and would continue after the launching of the submarine.

The important safety milestone of vacuum-testing was completed in the first attempt itself, and within a single day on January 5.

This matched the record of 'Kalvari', which also completed the vacuum test in one go.

Till December, the submarine will undergo rigorous trials and tests, both in harbour and at sea, while on surface and whilst dived.

These trials are designed to test each system to its fullest capacity. Thereafter, it would to be commissioned into the Indian Navy as INS Khanderi.

This would be preceded by the commissioning of Kalvari later this year. The other four submarines will follow in the wake of Khanderi at intervals of nine months.

As per tradition, ships and submarines of the Navy are brought alive again after decommissioning. The first Khanderi was commissioned into the Navy on December 6, 1968 and decommissioned on October 18, 1989.