2.0 box office collection: This most awaited film is set to be released in less than 24 hours from now on Thursday. Starring Rajinikanth and Akshay Kumar, the film was made on a budget of between Rs 500 crore and Rs 600 cr. 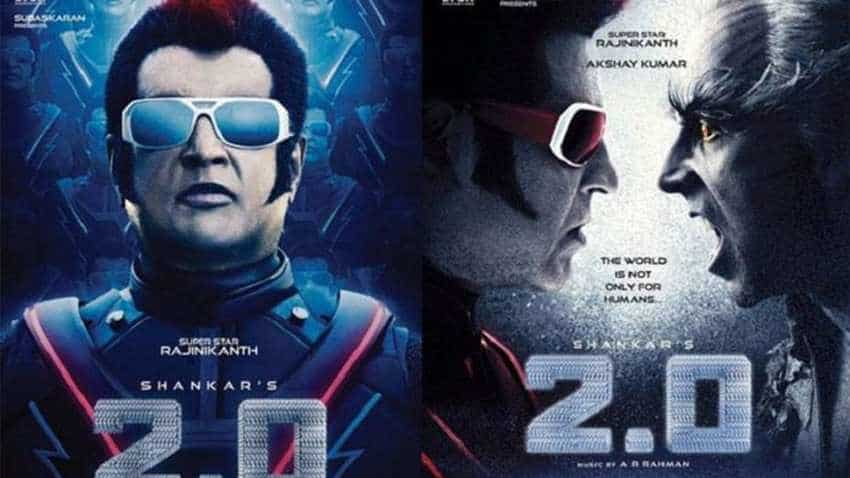 2.0 box office collection: This most awaited film is set to be released in less than 24 hours from now on Thursday. image source: Zeenews.com

2.0 box office collection: This most awaited film is set to be released in less than 24 hours from now on Thursday. Starring Rajinikanth and Akshay Kumar, the film was made on a budget of between Rs 500 crore and Rs 600 cr and this amount will be a big challenge to earn back as well as make handsome profit. However, considering the kind of cult following Rajinikanth has and on top of that there is the massive fan following of Akshay Kumar, chances are that 2.0 will do better than all other movies before it. As far as 2.0 collection prediction on day 1 is concerned, the film is set to grab a minimum of Rs 25 crore to Rs 30 crore. But when it comes to these two actors, you never know, something unexpected may also happen!

Yes, 2.0 film has been hyped up in a big way especially over the last 10-15 days and the expectations from the audience are massive indeed. The film has already earned in excess of Rs 100 cr in terms of advance booking reportedly and is set for much, much more after release.

While the acting prowess of both Rajinikanth and Akshay Kumar will be showcased fully, the skills of Director Shankar too will be very much on view. Shankar is known for bringing something different and new each time he helms a film. His other films like earlier Robot, were technological marvels and something new for the Indian audiences and 2.0 is his biggest film yet and it is generally being hoped that this would be his best.

2.0 is likely to release in over 10,000 screens worldwide, which includes Hindi version in 4000 screens. This makes the movie the biggest release of both Rajinikanth and Akshay Kumar.

2.0 is releasing on Thursday and despite it not being a national holiday, expectations are that the movie will bring in a hefty amount during the opening weekend.

The first record that Rajinikanth and Akshay Kumar film 2.0 collection is looking at will be Aamir Khan starrer Thugs of Hindostan, which created history by earning over Rs 52 cr on day 1 itself. Notably, a trade analysts has said that the film may even earn Rs 100 cr on day 1, if all things go well across India.