2.0 Box Office Collection: Film critic and trade analyst Sumit Kadel told zeebiz.com that the film has registered an occupancy of over 95 per cent in the southern belt and 30 to 35 per cent in Hindi belt. 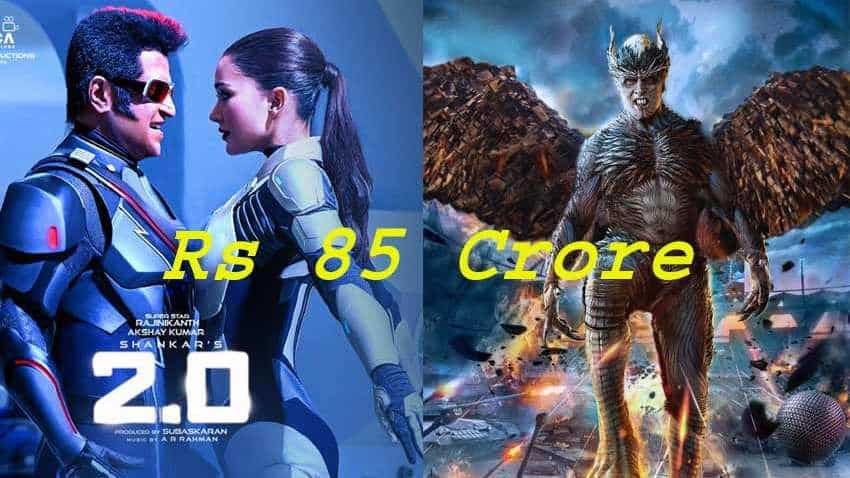 : Rajinikanth and Akshay Kumar starrer 2.0 has been released across the globe today. The first of its kind 3D movie shot in India is expected to create a 'Tsunami' at the box office, film critics have predicted before its release. Given the euphoria and buzz around the movie and responses to the advance bookings, the movie is all set to break several Bollywood and pan India records, including the one of Baahubali 2 lifetime earnings.

Film critic and trade analyst Sumit Kadel told zeebiz.com that the film has registered an occupancy of over 95 per cent in the southern belt and 30 to 35 per cent in Hindi belt.

"2.0 is expected to earn Rs 20 to 22 crore in Hindi belt. The advance booking in North India has been poor. If the movie registers a good spot booking, the collections may further soar above Rs 25 crore," said Kadel.

Kadel added that the response it has received in South may propel it towards earning Rs 60 crore today.

"The film has received an immense response during the advance booking in Southern belt. With an occupancy rate of over 95 per cent, the film may earn massive Rs 55 to Rs 60 crore including Tamil and Telugu on day 1," added Kadel.

If taken together, the S Shankar direction is all set to earn around Rs 85 crore in three formats - Hindi, Tamil and Telugu. Given that the movie is being released across the world on a record number of screens (over 10,000), its earnings may be well above the estimates.

If its earnings in Malayalam and other languages are added, 2.0 collection may cross the Rs 100 crore mark on day 1. And then there will be the  overseas collections! Notably, 2.0 is being released on a record number of screens overseas too.

Kadel said that the Thalaiva film 2.0 may beat Vijay starrer Sarkar by a good margin. Not only this, if the movie earns even Rs 60 crore domestically, it may well beat films like Thugs Of Hindostan (Rs 52.25 crore), Happy New Year (Rs 44.97 cr), and Baahubali 2 – The Conclusion (Rs 41 cr).

Akshay Kumar plays a villain in the science-fiction movie which is a sequel of the Robot, which was released in 2010.