The flight number AI176 left San Francisco on Saturday at 8.30 PM (local time) and arrived in Bengaluru at 3.45 AM on Monday, PTI quoted Air India sources confirming this 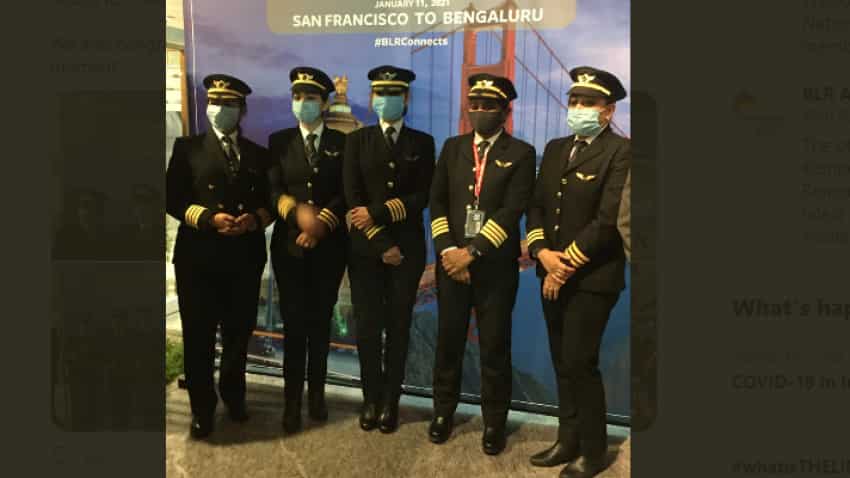 An all-women cockpit crew operating Air India's inaugural San Francisco-Bengaluru flight arrived in Karnataka's capital after flying over the North Pole and covering a distance of about 16,000 kilometres.

"Today, we created world history by not only flying over the North Pole but also by having all women pilots who successfully did it. We are extremely happy and proud to be part of it. This route has saved 10 tonnes of fuel," said Captain Zoya Aggarwal.

The longest flight over the North Pole is another feather in Captain Zoya's cap as she was the youngest woman pilot to fly a Boeing-777 in 2013. "I am the youngest woman commander in the world on Boeing 777. Women should have self-belief even if they face societal pressure not consider any task impossible," she had said.

Shivani Manhas, one of the four pilots who operated Air India's inaugural San Francisco-Bengaluru flight said, "It was an exciting experience since it was never done before. It took almost 17 hours to reach here."

Before the flight Union, Civil Aviation Minister Hardeep Puri reacted over the history in making and had said, "Air India's woman power flies high around the world, our Nari Shakti achieves a historic first."

It was the first direct non-stop flight between the west coast of the United States and southern India.

We also congratulate passengers of AI176 for being part of this historic moment. pic.twitter.com/UFUjvvG01h

"Imagine this: All Women Cockpit Crew. Longest flight into India. Crossing the North Pole. It’s here & happening! Records were broken. History in the making by AI176 from San Francisco to Bengaluru. AI 176 is cruising at 30000 feet," Air India tweeted.