10 lakh PSU bank employees to go on strike tomorrow; here's what they are demanding

The unions claimed that as the conciliation meeting before the Chief Labour Commissioner failed, unions are left with no other option but to go on strike. 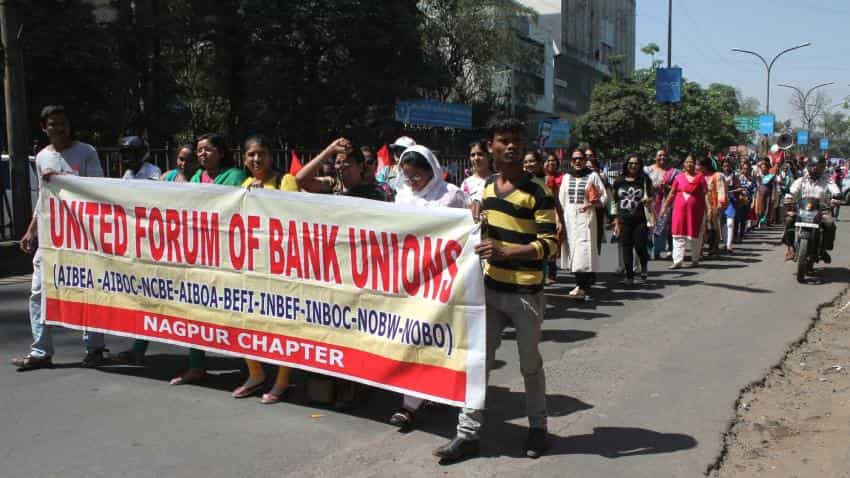 Bank employees participate in a rally organised during nationwide strike called by the UFBU against the government on Feb 28, 2017. Photo: IANS
Written By: ZeeBiz WebTeam
RELATED NEWS

Employee unions under United Forum of Bank Unions (UFBU) on threatened to go on strike on Tuesday against the government's proposed consolidation reforms.

The unions claimed that as the conciliation meeting before the Chief Labour Commissioner failed, unions are left with no other option but to go on strike.

As many as 21 public sector banks control 75% of the total business.

Though, most of the PSU banks have informed their customers about the strike and impact on services, operations at private banks like ICICI Bank, HDFC Bank, Axis Bank, are likely to remain normal except there can be a delay in cheque clearance.

The unions under the UFBU announced the strike after talks with the government over a proposed consolidation move across the sector were inconclusive, among other demands.

What are the demands?

According to a PTI report, unions have four demands:

1. No write-off policy for non-performing assets (NPAs) of corporate loans
2. Declaring wilful default of loans as criminal offence
3. Implementation of the recommendations of parliamentary committee on recovery of NPAs
4. Government should abolish the Banks Board Bureau and ensure stringent measures to recover bad loans.

Apart from these three demands, the unions said that banks should not pass on the burden of corporate bad loans on bank customers by raising the charges.