RBI monetary policy review 2018-19: The Reserve Bank of India (RBI) is just few hours away from presenting the first monetary policy of the fiscal year FY19, and many economists have already projected a status quo in this review for the third time in a row. RBI kept policy repo rate unchanged at 6% since past three monetary policy meetings along with accommodative stance due to fear of higher inflation and macro-economic data.

Here’s a list of ten factors, that will impact RBI’s decision in this monetary policy, as per Care Ratings.

For the period April – 16th Mar’18, deposits at Rs 111.61 lakh crore grew by 3.7% lower than 12.5% growth witnessed in the corresponding period last year. This can be ascribed to households migrating from deposits to mutual funds on account of better returns in the market.

In addition to this, last year numbers include the impact of demonetization where the deposit inflows had increased sharply.

Growth was primarily driven by retail segment which increased by 14.5% during Apr- 16th Feb’18. However, growth in manufacturing declined by (-) 2% with medium and large enterprises witnessing negative growth and small and micro enterprises growing by mere 0.2%.

Substantial liquidity which flowed through the deposits surge post demonetization had gotten absorbed over time. Currently,  outstanding funds in reverse repo are around Rs 1.5 lakh crore while o/s repo is around 2.7 lakh crore. Hence, there is a liquidity deficit of Rs 1.2 lakh crore. During the course of the year the RBI has sold securities of almost Rs 90,000 cr through its OMOs.

Interestingly, th government had budgeted market borrowings at Rs 6.05 lakh crore in FY19 higher than Rs 5.99 lakh as per FY18 (RE). Of this total Rs 6.05 lakh crore, government is expected to borrow Rs 2.88 lkh cr in the first half of FY19. This is however, lower than the normal trend given the tight liquidity conditions and high yields.

However, inflation in non-food items including fuel, housing and clothing and footwear continue to remain high. Also, RBI has estimated CPI to average 5.1-5.6% in 1HFY19 during last fiscal.

This is a signal that interest rates may not be eased this year and that there could be an increase.

The yields are expected to harden as higher demand for credit from farmers, industry and retail segment in second half of FY19 could pressurize liquidity further. 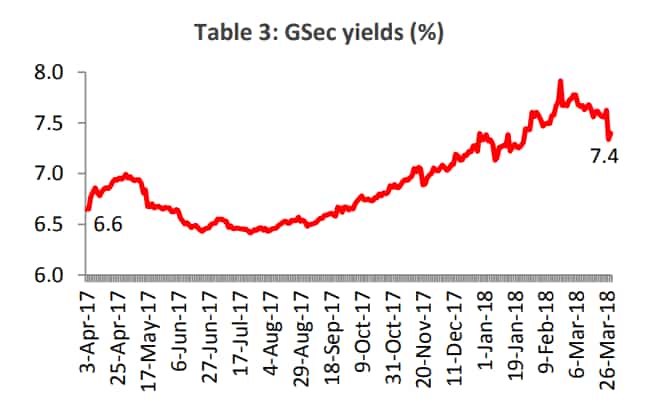 The rupee strengthened against US dollar in the first half of Jan’18 supported by overseas weakening of the dollar and higher FII inflows. However, the domestic currency depreciated in the month of Feb on lingering concerns over widening fiscal deficit & trade deficit and higher inflation, followed by further depreciation against USD in March month, due to concerns over fiscal slippages and potential global trade war. 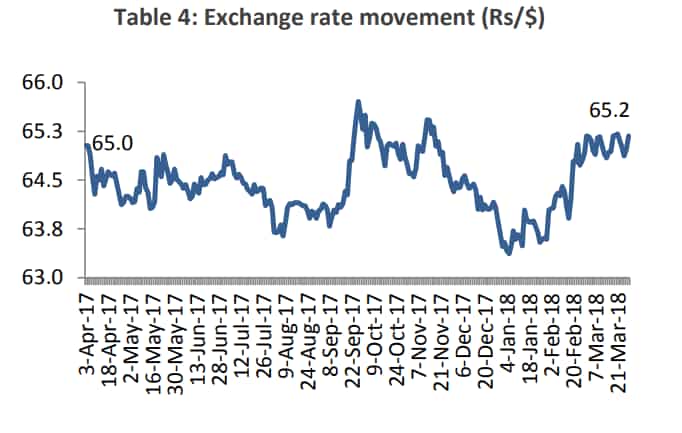 Some of the other factors are: 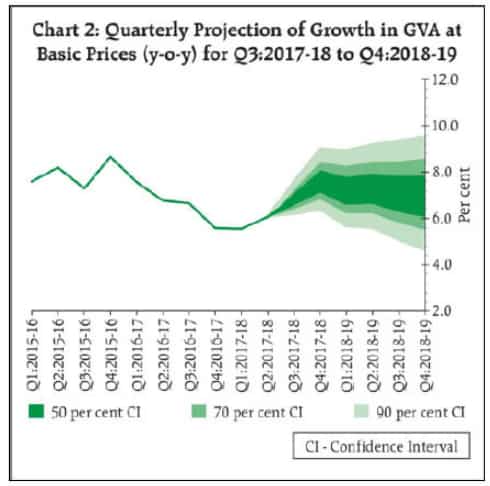 During February last year, it was 5.51%. Build up inflation rate in the financial year so far was 2.30% compared to build up rate of 4.92% in the corresponding period of the previous year.

Cumulative growth of IIP for the period April-December 2017 over the corresponding period of the previous year stands at 3.7%.

Thus economists at CARE said, “Given these considerations, RBI is likely to maintain an unchanged stance on policy rates. The important issue will be the tone of the policy- will it be hawkish or neutral. We would tend to think that there would be more than neutral indications with a tint of hawkishness.”