Zee Digital, the digital arm of Zee Group, has added one more feather to its cap. It continues to reach new landmarks and strengthen its presence in the digital world with its leading Marathi news brand 24Taas.com. 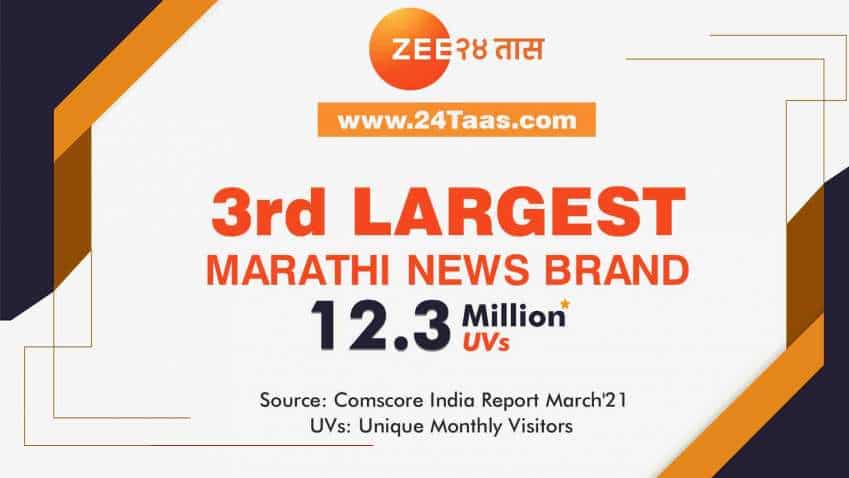 Zee Digital, the digital arm of Zee Group, has added one more feather to its cap. It continues to reach new landmarks and strengthen its presence in the digital world with its leading Marathi news brand 24Taas.com. The Marathi news raised itself to the 3rd position on Comscore among Marathi News brands, crossing the 12 million Unique Monthly Visitors mark in March 2021. 24Taas.com growth was phenomenal as copared to its Competitors like Lokmat.com, Loksatta.com and News 18 Lokmat.com as they registered 9.7 Mn, 10.4 Mn, and 10. Mn Unique Monthly Visitors respectively. .

A pillar in the growth of the 24Taas.com was its well managed and planned content strategy. Giving the time of lockdown and crisis the channel completely focussed its energy on presenting the positive side of the stories to its users. Commenting on the same, Nilesh Khare, Editor and Business Head, Zee 24Taas tells us, ”During the peak of Corona times, 24Taas.com focussed itself in showing more positive news than negative news, due to which 24Taas.com was appreciated by its users and was promoted to 3rd position in Mar’21 directly from 8th position in Feb’21. ‘Chan Bhala’ meaning ‘Sabka Bhala Ho’ was a specialised segment launched keeping this specific strategy in mind”.

24Taas.com opted for easy to understand format, content and words keeping its everyday users in mind. The segments even covered severe medical terminology in its stories but in a manner which was well received and understood by its users. Similarly content headlines were also constructed in positive manner, with lesser use of words which had the potential of triggering the negative sentiments in users in header and stories.

Explaining it further, Khare added, ”We didn’t focus on showcasing a number of news rather our focus was on quality of the news and even in the testing time like Coronavirus Crisis the complete team of 24Taas.com did a phenomenal job and helped the channel reach to no. 3 position”

Recently Zee Digital did the largest PWA launch for 13 of its national and regional news brands covering 9 languages, 24Taas.com being its flagship project was also part of the launch.

ZEE Digital CEO, Rohit Chadda said, “Regional India is using the internet first on mobile, hence our focus is to optimise performance on mobile to ensure the best experience possible for the user. Through the PWA launch of 24Taas.com we offered seamless news consumption experience to its users with product performance metrics that are best among competition. Further focus on videos gave its users the opportunity to watch the news in their native language with just one click.”

Commenting on the future plan, Chadda concluded, “While the PWA launch has improved the mobile web experience massively and users can now access their favourite news faster, 24Taas.com will soon be available as a native app on Android and IOS to provide its viewers an even more seamless Live TV experience along with exclusive original videos.”

Recently, Zee Digital crossed the mark of 300 Million MAUs (Monthly Active Users) in April 2021 registering a growth of 4x in past two years. Bollywoodlife.com, the leading entertainment portal of Zee Digital, has seen a staggering growth of 3.2x in the year on year crossing 20 million monthly active users (MAUs) in Apr’21 from 6.3 million MAUs in Apr’20.

Earlier this year, India.com, the flagship brand of ZEE Digital, saw major product revamp giving its users the access to latest news updates, breaking news, in-depth coverage, and analysis of news from India and the World in the form of video and content alike. India.com registered 10x growth in the last financial year growing its user base from 7.4 million MAUs to 75 million MAUs.